The reason most commonly given by those who would not get a vaccine is worry about side effects (56%) followed by doubt about its effectiveness (29%).

Ipsos Australia Director, David Elliott, said: “Australia can expect rapid adoption of a vaccine for COVID-19 when it becomes available locally, with Australians expressing relatively high levels of preparedness to ‘get it’. This has implications for the careful management of the rollout of the vaccine to cope with high levels of demand. Additionally, health authorities will need to pay particular focus to educating the public about the potential side effects of any vaccine to ensure maximum take-up.  Reassuring them of its effectiveness will also be important.”

Intentions to get vaccinated against COVID-19

Globally, 74% of all adults surveyed agree that: “If a vaccine for COVID-19 were available, I would get it”. However, only 37% strongly agree while 37% somewhat agree. Overall, 26% disagree (15% somewhat disagree and 12% strongly disagree).

In most countries, those who agree outnumber those who disagree by a significant margin (more than 50 percentage points in 12 out of 27 countries). 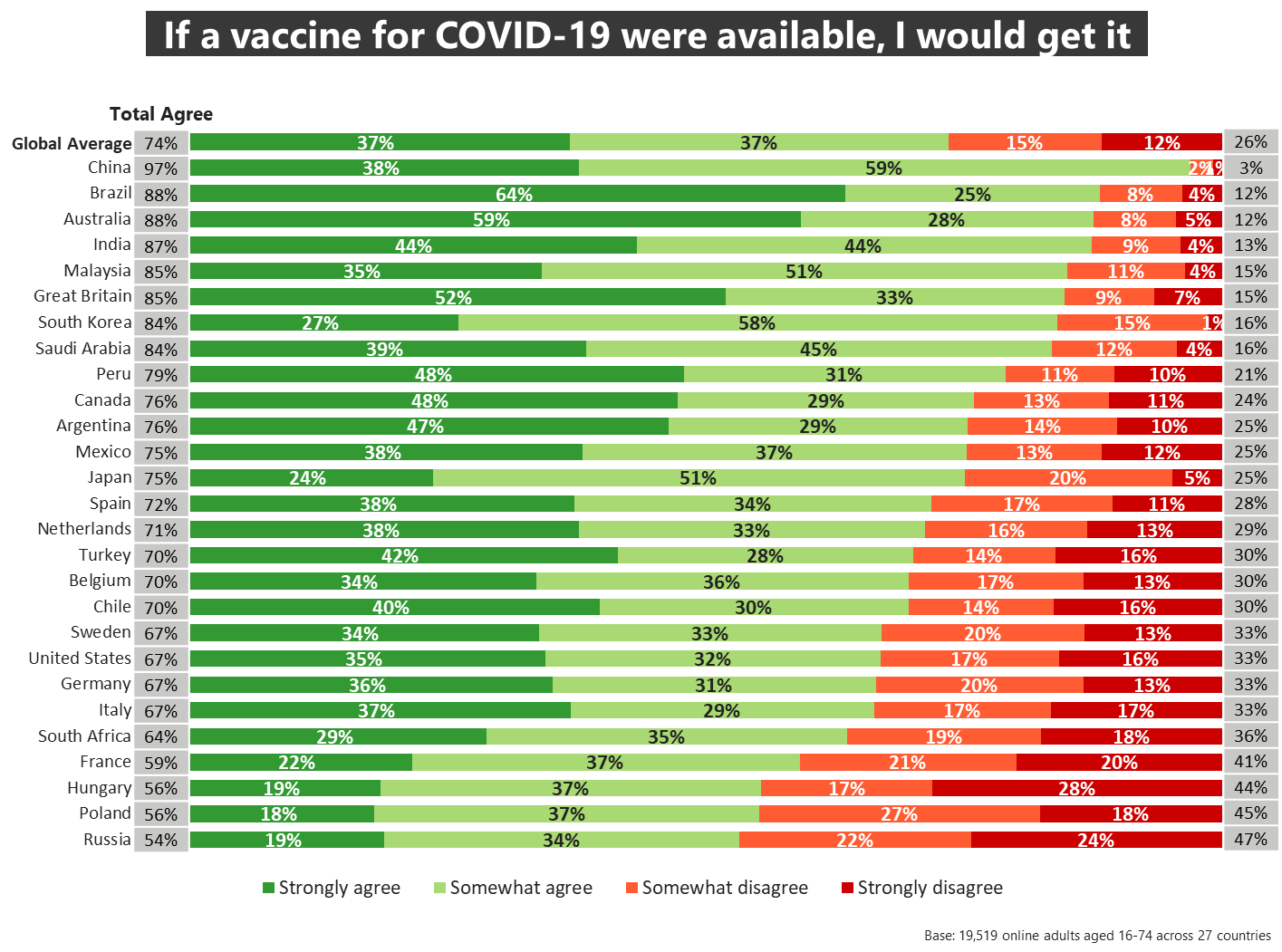 Expectation that a COVID-19 vaccine will be available this year. 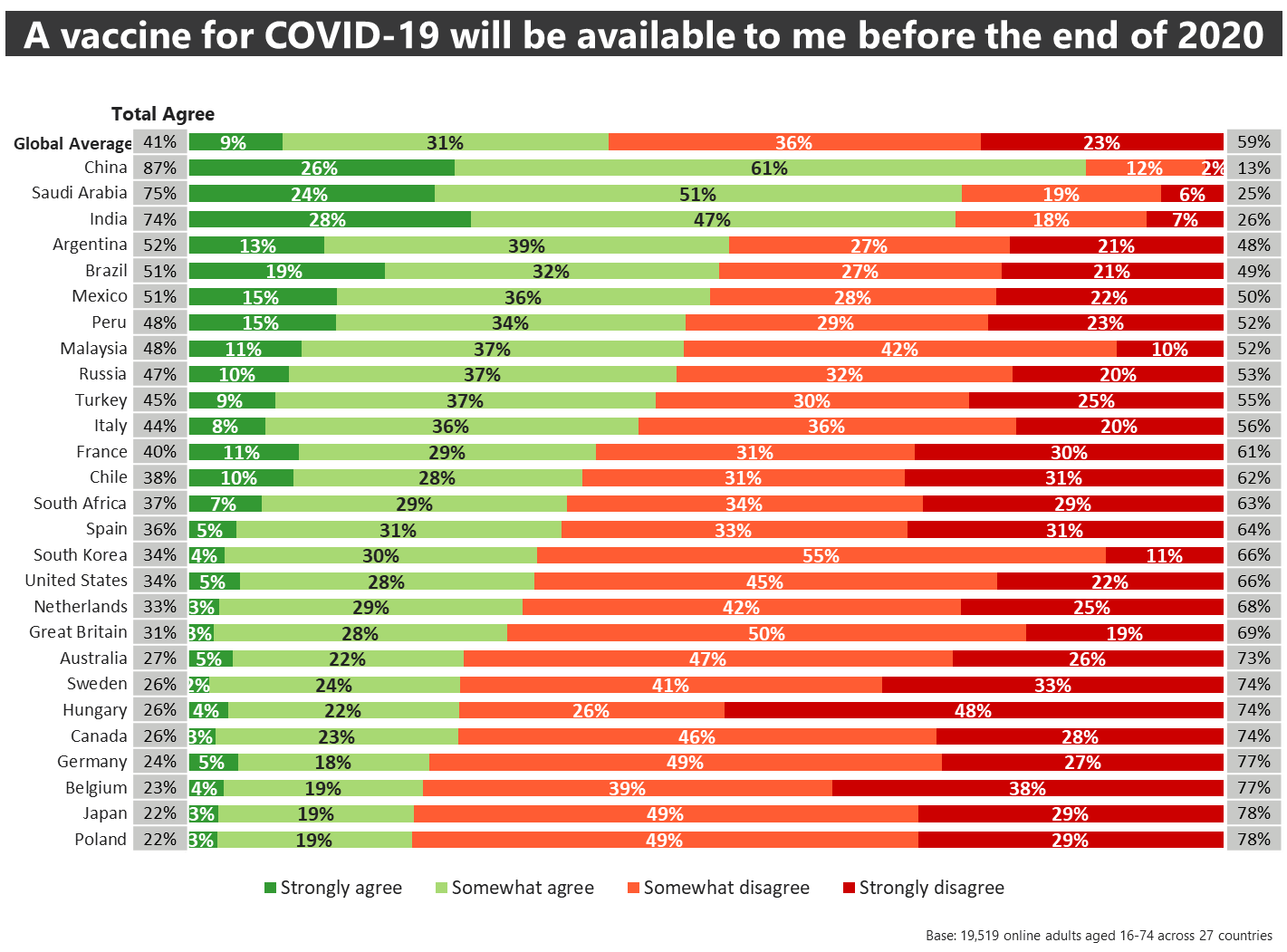 The second-most common reason for not wanting to take a COVID-19 vaccine is doubt about its effectiveness, cited by 29% globally (from as many as 44% in Russia and Poland to just 12% in China and 9% in Mexico).

The third most common reason is the perception of not being enough at risk from COVID-19, cited by 19% globally. Among those who are reluctant to be vaccinated, this view is most prevalent in India (37%), Malaysia (36%) and Sweden (35%), while it is least so in Italy (7%) and Brazil (10%).

General opposition to vaccines is cited by 17% of those who would not get a COVID-19 vaccine globally, but as many as 30% in Russia and Italy. 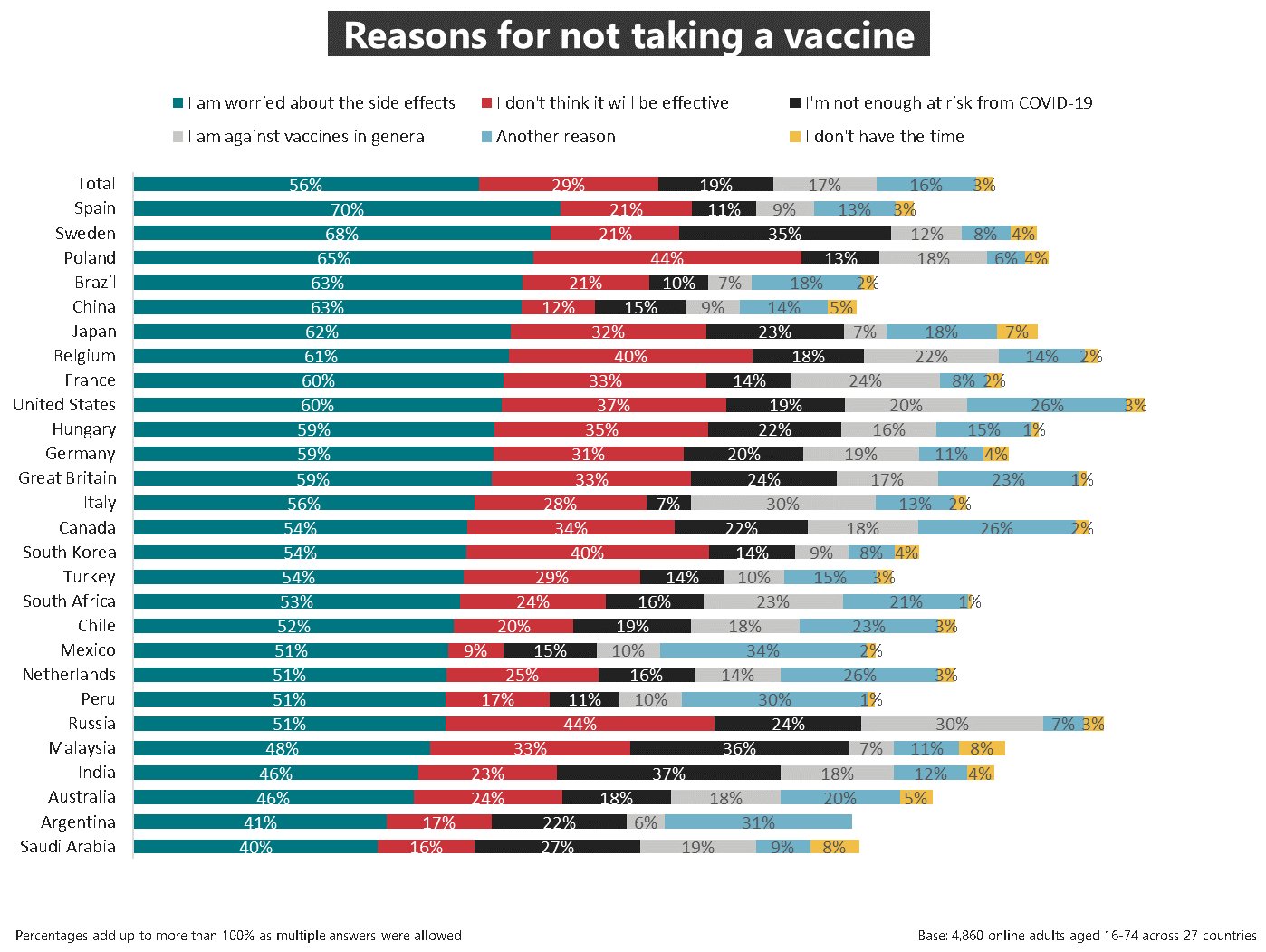 These are the results of a survey conducted by Ipsos between July 24 and August 7, 2020 on its Global Advisor online survey platform among a total of 19,519 adults, aged 18-74 in United States, Canada, Malaysia, South Africa, and Turkey, and aged 16-74 in 22 other countries.

The samples in Argentina, Australia, Belgium, Canada, France, Germany, Great Britain, Hungary, Italy, Japan, the Netherlands, Poland, South Korea, Spain, Sweden, and the U.S. can be taken as representative of these countries’ general adult population under the age of 75. The samples in Brazil, Chile, China (mainland), India, Malaysia, Mexico, Peru, Russia, Saudi Arabia, South Africa and Turkey are more urban, more educated, and/or more affluent than the general population. The survey results for these countries should be viewed as reflecting the views of the more “connected” segment of these population.