Australians are the most satisfied citizens in the world when it comes to the quality of healthcare, they have access to, according to a new Ipsos global survey of 27 nations. We also have very high levels of trust in our healthcare services and rate highly on access to both care and information.

A large minority of Australians (42%), however, are concerned that many in our country cannot afford good healthcare and more than half (55%) believe the health system is currently overstretched.

Ipsos Australia  Director, Head of Public Affairs – Melbourne, Dan Pole, said:  “These results are a continuation of a longer term trend of increasing positivity towards healthcare and the healthcare system in Australia. We are more satisfied than we were a decade ago, and right now we are among the most satisfied citizens in the world.

“This is something that everyone in healthcare – from frontline staff to ministers – should be very proud of. We should also avoid complacency and remember that perception and reality are not always aligned.” 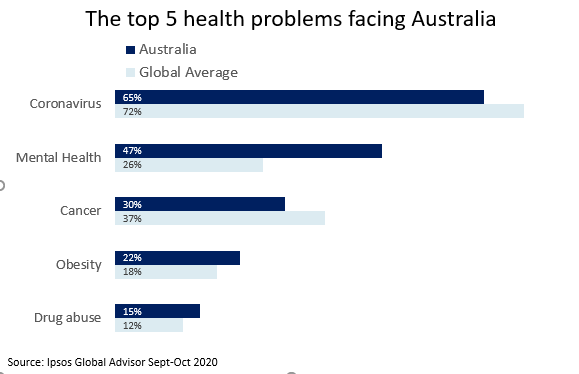 Australians were just as likely as their US counterparts to mention Coronavirus as a health problem (65% mention in Australia compared to 66% mention in the US).

Australians were much more likely than the global average to cite mental health as an issue.

A clear majority of Australians (72%) believe that vaccinations against serious infectious diseases should be compulsory – significantly higher than the global average (64%). Support for compulsory vaccinations is more prevalent among Australian men (74%) and those aged 50-74 years (78%).

This 27-country Global Advisor survey was conducted between September 25th and October 9th, 2020 via the Ipsos Online Panel system among 20,009 adults aged 18-74 in Canada, Malaysia, South Africa, Turkey and the United States, and 16-74 in all 22 other countries.

The samples in Brazil, Chile, China, India, Malaysia, Mexico, Peru, Russia, Saudi Arabia, South Africa, and Turkey are more urban, more educated, and/or more affluent than the general population. The survey results for these markets should be viewed as reflecting the views of the more “connected” segment of these populations.

Weighting has been employed to balance demographics and ensure that the sample’s composition reflects that of the adult population according to the most recent census data.