The majority of citizens in most of 25 countries surveyed by Ipsos express feelings of alienation when thinking about their country. The Ipsos Broken System Sentiment 2021 survey of more than 19,000 adults finds perceptions of a broken political and economic system prevailing in most countries, often accompanied by populist and anti-elite sentiment and nativist views and the same is true in Australia, although often to a lesser extent.

In Australia around three in five people surveyed feel left out of the “normal order” of life here:

Commenting on the findings, David Elliott, Director, Ipsos Australia Social Research Institute, said: “These latest findings are evidence that while Australians are at lower levels for populist and nativist views and beliefs the system is broken, our views have mostly remained stable or, in the case of the system is broken, have improved slightly.”

This feeling of the system being broken only increases when looking at the global findings. On average, 56% agree their country’s society is broken and 57% agree that their country is in decline. To fully grasp the prevalence of social and political disaffection, Ipsos designed the “System Is Broken” Index, based on the level of agreement with five statements:

Since 2016, broken-system sentiment has gained the most ground in Japan, South Africa, Sweden, the United States, and Argentina; it has receded most in Spain, Mexico, and France. Compared to 2019, months before the pandemic, it has increased most in Malaysia and decreased most in Great Britain.

Broken-system sentiment is highly linked to populist sentiment, resentment of elites, and natives-first/anti-immigration views. Ipsos also found that its System Is Broken Index is highly correlated with both the Social Progress Imperative’s Social Progress Index, an outcomes-based indicator of how well citizens’ social and environmental needs are met, and Transparency International’s Corruption Perceptions Index. Countries with higher levels of wellness, equality, inclusion, sustainability, personal freedom, and safety and those with lower levels of perceived public-sector corruption tend to show lower levels of broken-system sentiment. 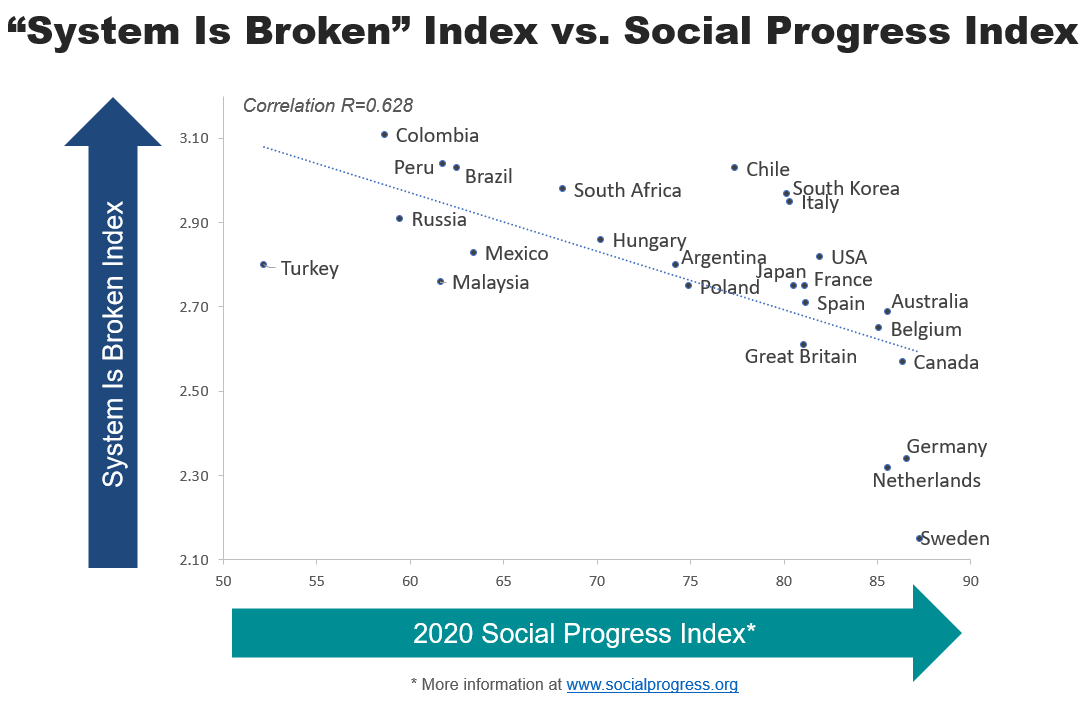 Populism and resentment of elites

Populist and resentment sentiment is prevalent within Australia:

Populist sentiment in Australia is behind that of the global average:

Nativist views vary in their prevalence in Australia:

Again, Australia is close to the global average for these nativist views:

Ipsos designed a Nativism Index based on the levels of agreement with these three statements. It shows nativist sentiment is most prevalent in Turkey, Malaysia, Colombia, Peru, and Russia and least so in Canada, Sweden, Great Britain, Germany, and Spain. 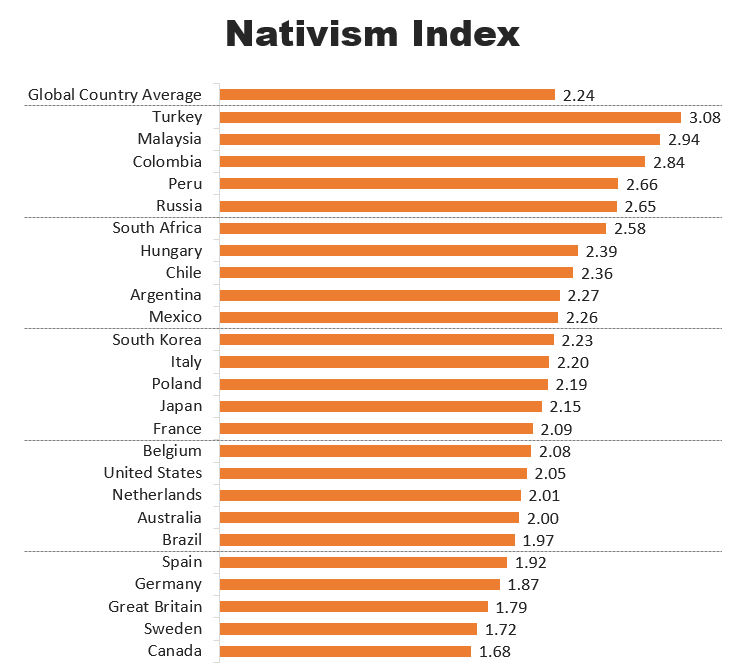 The Nativism Index is strongly correlated with the “System Is Broken” Index, indicating how much social and political alienation and anti-immigration views tend to go hand in hand.

Sample surveys and polls may be subject to other sources of error, including, but not limited to coverage error, and measurement error. The precision of online surveys conducted on Global Advisor is measured using a Bayesian Credibility Interval. Here, the poll has a credibility interval of +/-3.5 percentage points for countries where the sample is 1,000+ and +/- 4.8 points for countries where the sample is 500+. For more information on the Ipsos use of credibility intervals, please go to: https://www.ipsos.com/sites/default/files/2017-03/IpsosPA_CredibilityIntervals.pdf.