A majority of people in 26 countries say the overall cost of food, goods and services have increased for them and their family, since the coronavirus outbreak began, according to the latest global Ipsos survey.

In Australia, more than half (52%) said the overall cost of food, goods and services had increased for them.

On the other end, more than a quarter of people in Hungary (27%) and South Korea (26%) said costs had decreased somewhat or a lot since the outbreak, followed by Japan and Russia (21%).

Meanwhile, almost a third of people in all countries (29%) said costs had stayed the same, with a majority agreeing in Sweden (53%), where restrictive lockdown measures were not implemented. Almost half of people in the Netherlands and Japan (49%) and South Korea (48%) also agreed. 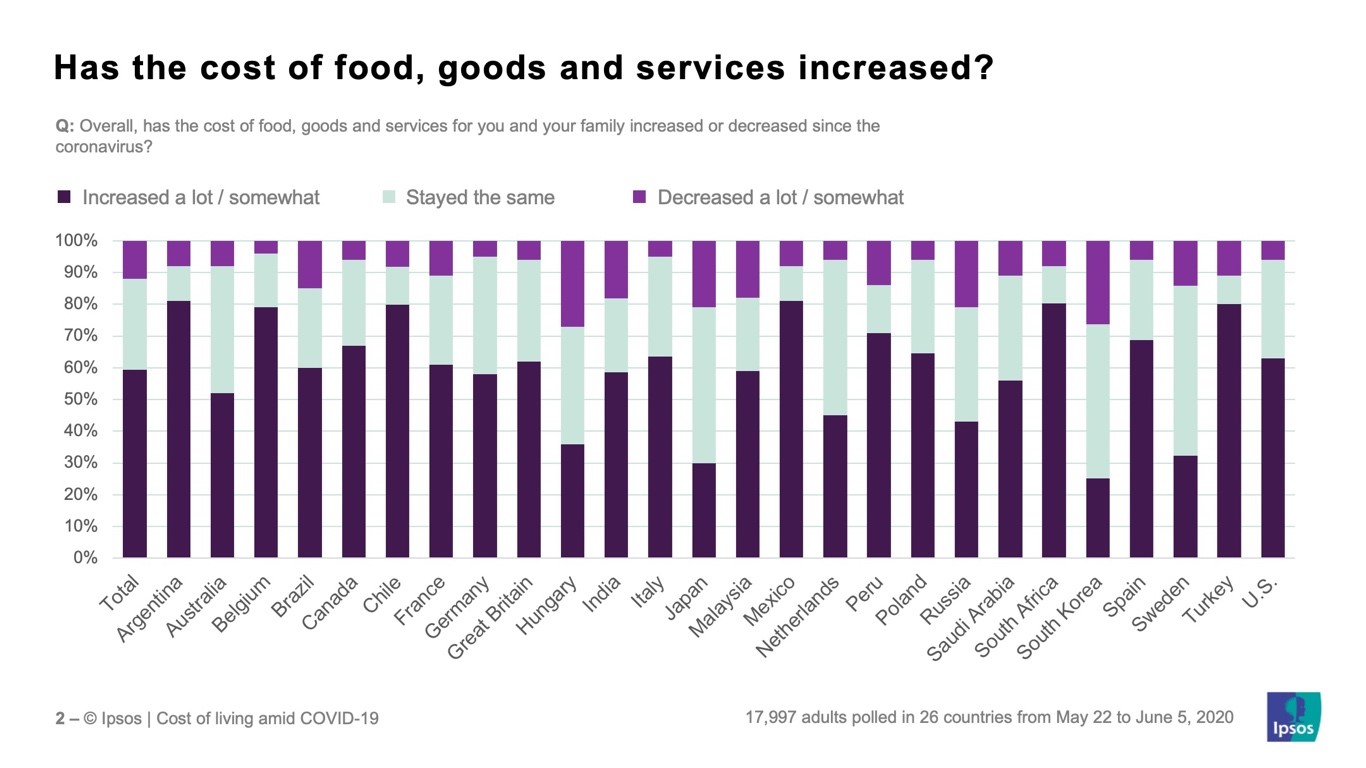 By region, people in Latin America were most likely to say costs had increased at 75%, followed by those in the Middle East and Africa at 72%.

What has increased, stayed the same or decreased?

Almost two-thirds of people globally (63%) said the cost of food, groceries and household supplies had increased since the COVID-19 outbreak – the only majority average of the 11 cost categories presented.

This sentiment was highest in Argentina and Turkey (86%), Chile, Mexico and South Africa (80%).

Utility bills, including water, electricity, heating, air conditioning andphone/TV/internet services, were the second biggest cost people said had increased, at an average of 39%. Those in Turkey (74%), Chile (68%), and Malaysia (65%) were most likely to cite this. 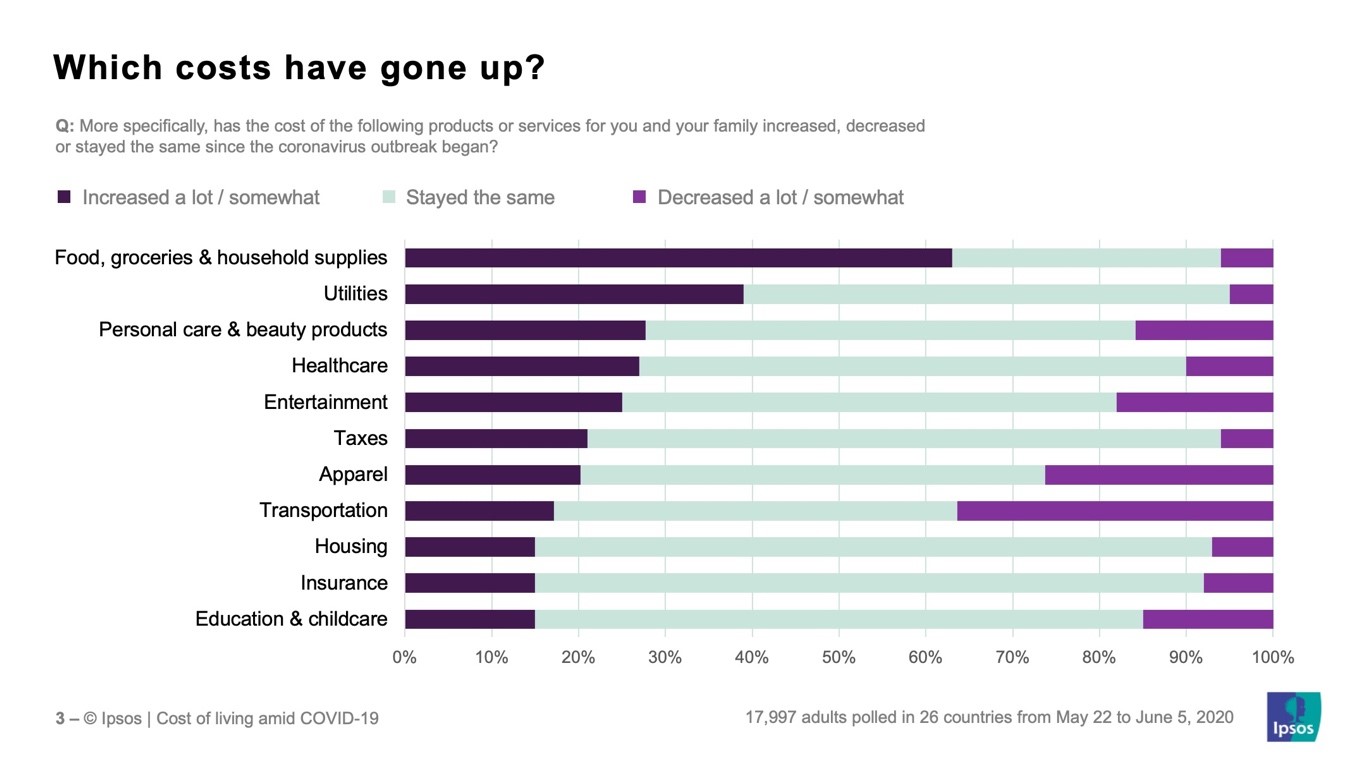 In terms of where costs remain unchanged, three in four people (78%) said housing costs, such as rent and mortgage payments, stayed the same, followed by insurance (77%) and taxes (73%). Another major expenditure, where 70% of people said they were not paying more or less, was education and childcare.

While costs overall have either increased or stayed the same, there were some areas where a significant portion of people said costs had decreased.

More than a third (36%) said transportation, such as using public transport and fuel costs, had decreased – likely a result of less travel, as restrictions forced people to work from home. A majority of people in Turkey (56%) cited this, followed by Malaysia (52%), Great Britain (51%) and Canada (50%).

More than a quarter (26%) said the cost of apparel, such as clothing, shoes and accessories, had decreased, reflecting fewer purchases, as retail outlets closed physical stores. People in South Korea and Turkey (46%) were most likely to agree with this.

Why did costs increase?

Half of people (50%) believed costs had increased for them because they had to purchase more expensive items or pay delivery charges, due to store closures and a shortage of supplies since COVID-19. But at the same time, an equal proportion of people globally disagreed. 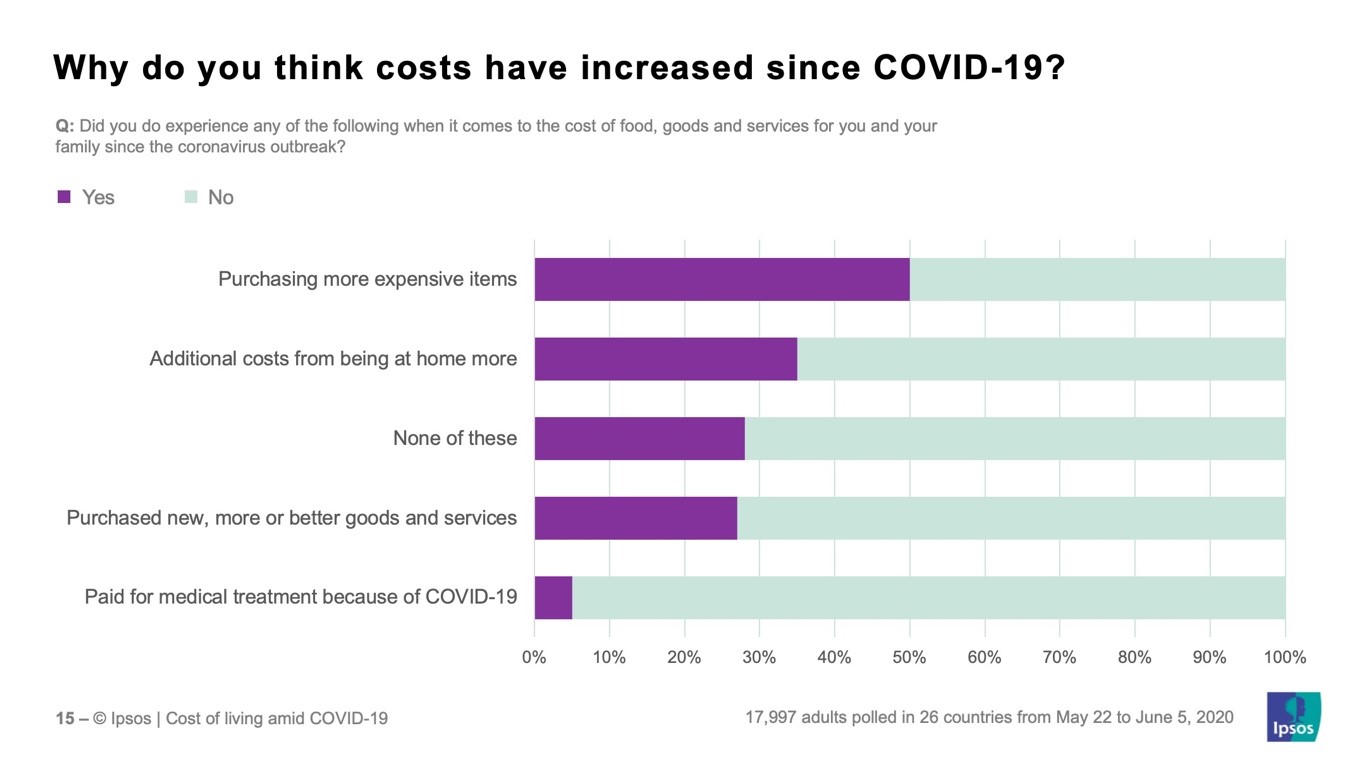 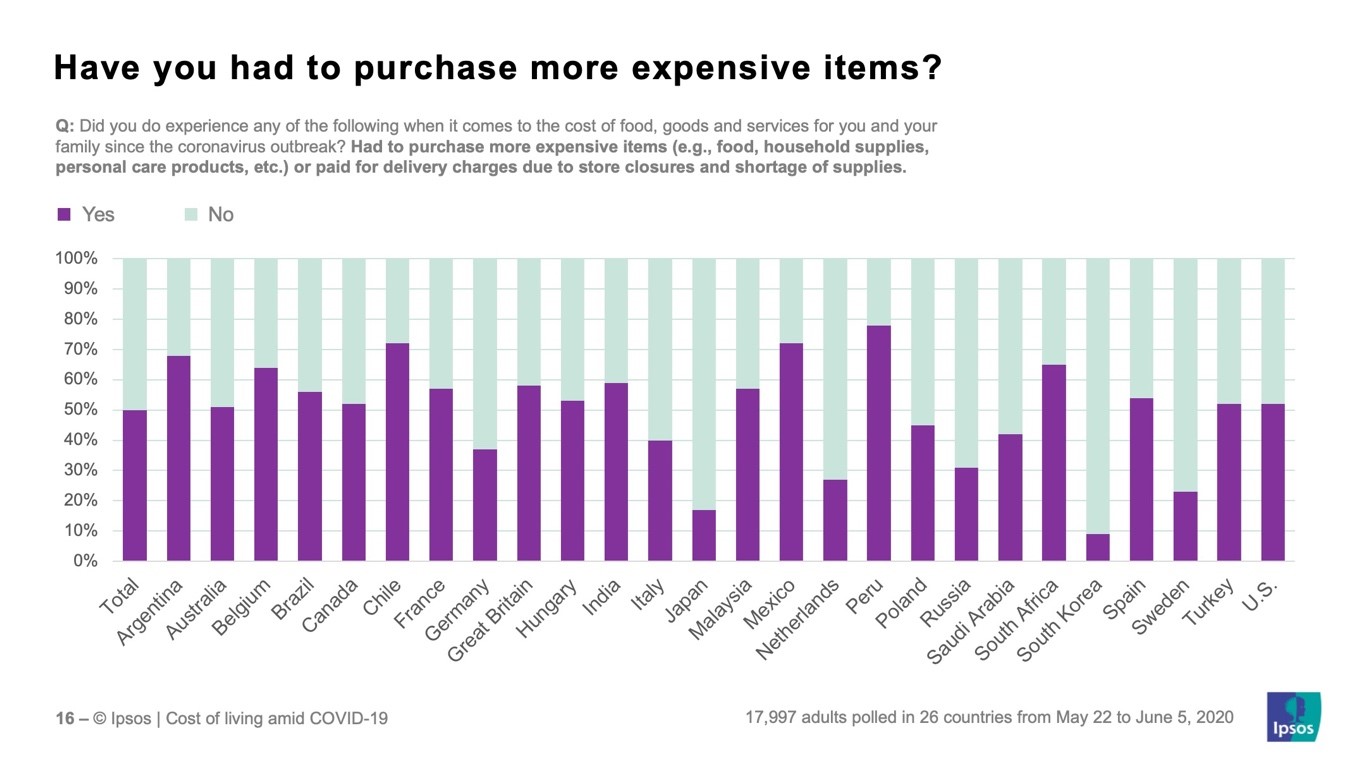 Lastly, most people (95%) said they didn’t have to pay for medical treatment because of COVID-19, while more than a quarter (28%) said they had not experienced any of these factors when it came to purchasing food, goods and services since the outbreak began.

For the results of the survey presented, an international sample of 17,997 adults aged 18-74 in the US, Malaysia, South Africa, Turkey and Canada, and age 16-74 in all other countries, were interviewed. Approximately 1000+ individuals participated on a country-by-country basis via the Ipsos Online Panel with the exception of Argentina, Belgium, Chile, Hungary, Malaysia, Mexico, Netherlands, Peru, Poland, Russia, Saudi Arabia, South Africa, South Korea, Sweden and Turkey, where each have a sample approximately 500+. The precision of Ipsos online polls are calculated using a credibility interval with a poll of 1,000 accurate to +/- 3.1 percentage points and of 500 accurate to +/- 4.5 percentage points. For more information on the Ipsos use of credibility intervals, please visit the Ipsos website.