There is a profound and widespread desire for change rather than a return to how things were before the COVID-19 pandemic, a new global Ipsos survey for the World Economic Forum unveiled.

The survey of more than 21,000 adults from 27 countries finds that globally 72% would prefer their life to change significantly rather than go back to how it was before the COVID-19 crisis started. Further, 86% would prefer to see the world change significantly – and become more sustainable and equitable – rather than revert to the status quo ante.

Globally, 86% of all adults surveyed agree that, “I want the world to change significantly and become more sustainable and equitable rather than returning to how it was before the COVID-19”. More precisely, 46% strongly agree and 41% somewhat agree with that proposition, while 14% disagree (10% somewhat and 4% strongly).

In each of the 27 countries surveyed, those who share this view outnumber those who don’t by a substantial margin – more than 50 percentage points in every country except South Korea.

Countries where the preference to return to the way things were before the pandemic is strongest include: South Korea (where 27% strongly or somewhat disagree that they would like to see the status quo changed), Germany (22%), the Netherlands (21%), the United States (21%), and Japan (18%). 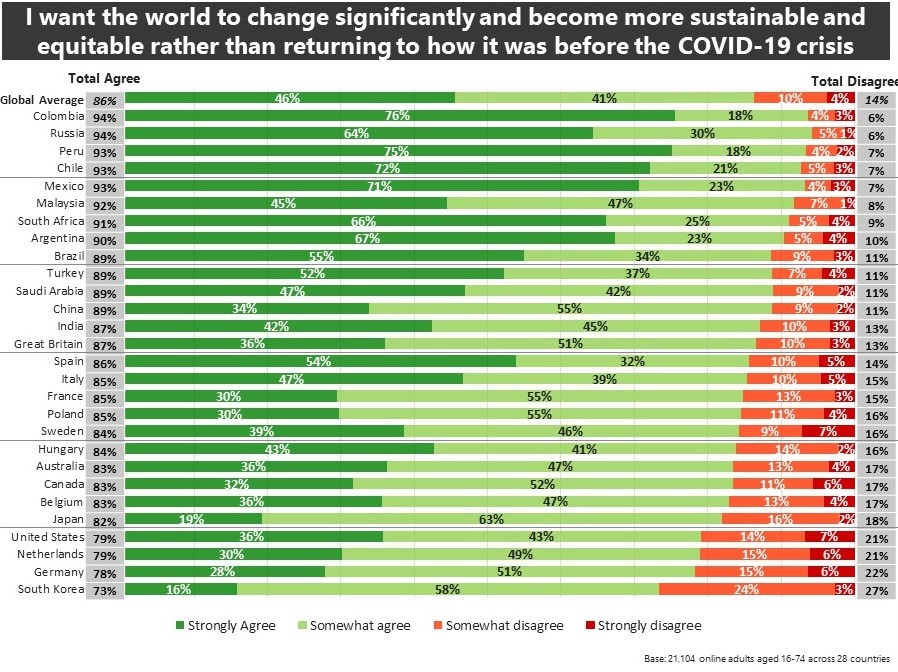 Across all 28 countries, 72% want their own lives to change significantly rather than return to what they were like before the COVID-19 crisis (30% strongly and 41% somewhat) while the other 29% disagree (21% strongly and 8% somewhat).

More than four in five adults throughout Latin America and in South Africa, Saudi Arabia, Malaysia, Russia and India express a desire for significant change in their personal lives after the pandemic.

By contrast, at least two out of five adults in the Netherlands, Germany, South Korea, Japan, Sweden, the U.S., Great Britain, and Canada long for their life to just return to how it was before the pandemic. 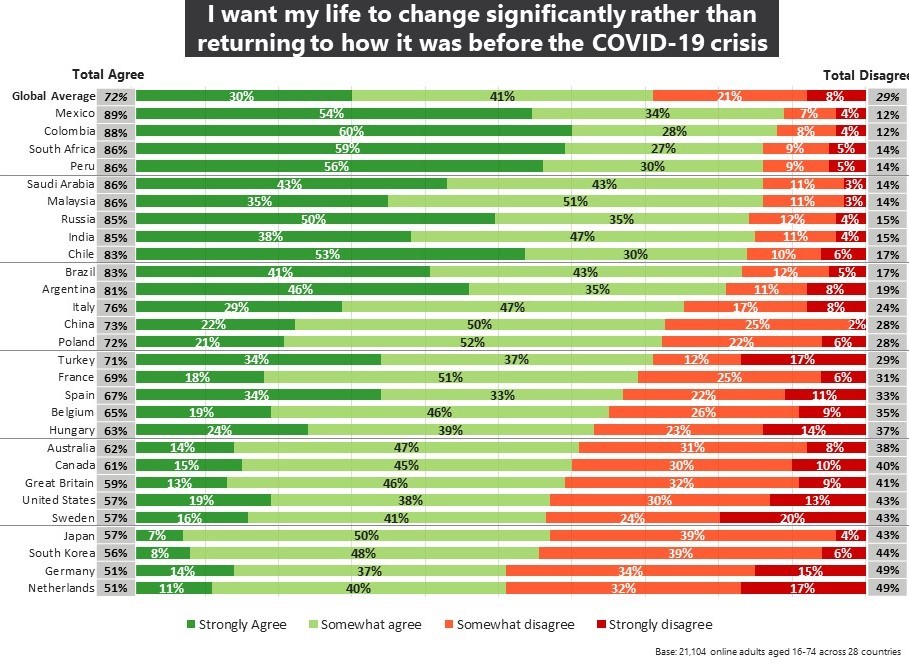 These are the results of a 28-country survey conducted by Ipsos on its Global Advisor online platform. Ipsos interviewed a total of 21,104 adults aged 18-74 in United States, Canada, Malaysia, South Africa, and Turkey, and 16-74 in 23 other countries between August 21 and September 4, 2020.

The samples in Brazil, Chile, China (mainland), India, Malaysia, Mexico, Peru, Russia, Saudi Arabia, South Africa, and Turkey are more urban, more educated, and/or more affluent than the general population. The survey results for these countries should be viewed as reflecting the views of the more “connected” segment of their population.