Three in four people in 16 major countries, and 70% of Australians, expect their government to make protection of the environment a priority when planning a recovery from the coronavirus pandemic, according to a global Ipsos poll conducted to mark World Environment Day on 5th June.

“It’s clear that most Australians see a strong connection between the health of the environment and their own wellbeing. Where our views differ is in relation to how that concern should be reflected in government action. Only two-thirds of us feel the environment should be prioritised as we plan to recover from COVID-19. That’s broadly in line with other countries in the anglosphere such as Canada, the US and the UK,” Ipsos Australia Director, Stuart Clark, said.

“Following the global financial crisis in 2008 our data showed that Australians’ focus on climate change dropped dramatically as economic concerns became more important. Now that we are officially in a recession, it will be interesting to watch how these figures move. The idea that the recovery should be led by projects that support the green economy has gained a lot of media attention, and it will be interesting to see whether that traction remains as people start to feel the pinch financially. 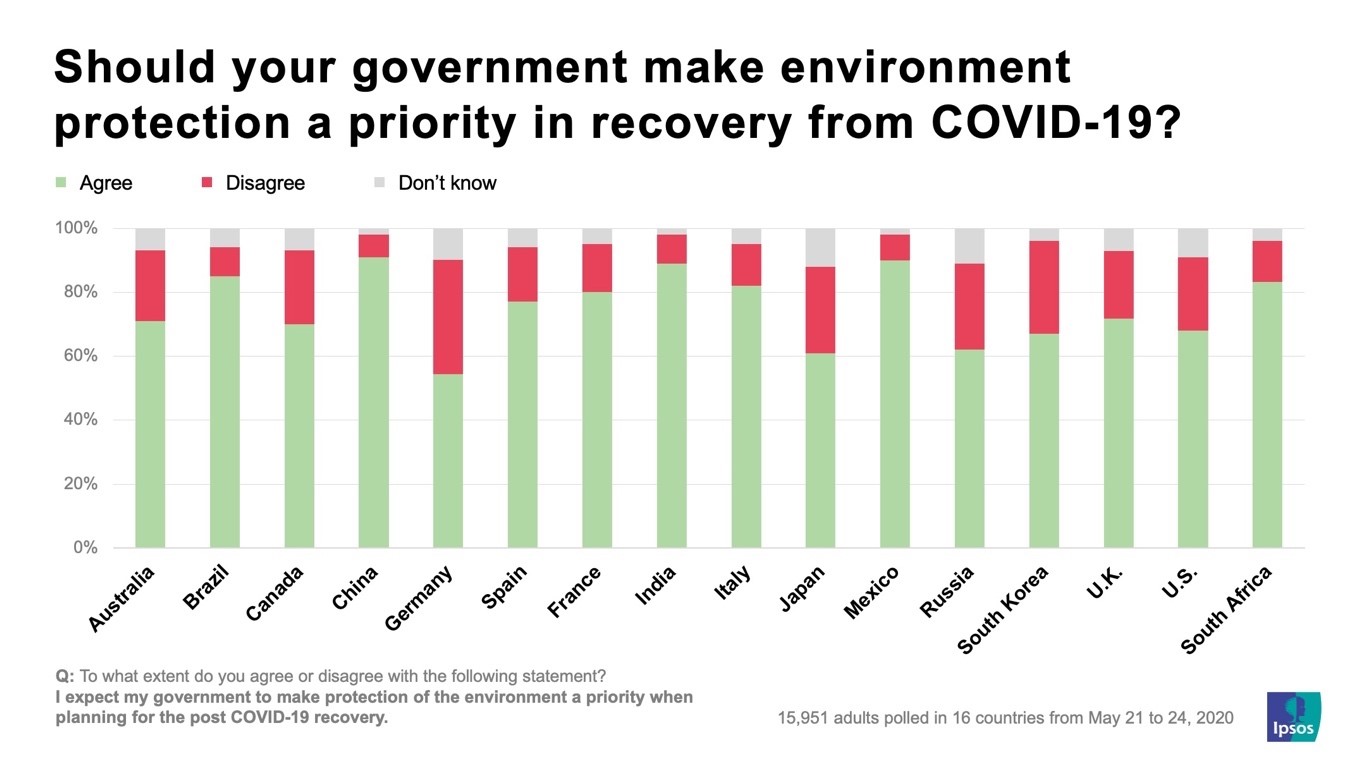 Added to this, there is a view the environment is a personal priority for people with half of the respondents, including Australia, disagreeing that protecting the environment is far down on their list of priorities right now. This sentiment is highest in many European countries including Germany and France (67%), Mexico (65%), Spain and South Africa (60%). 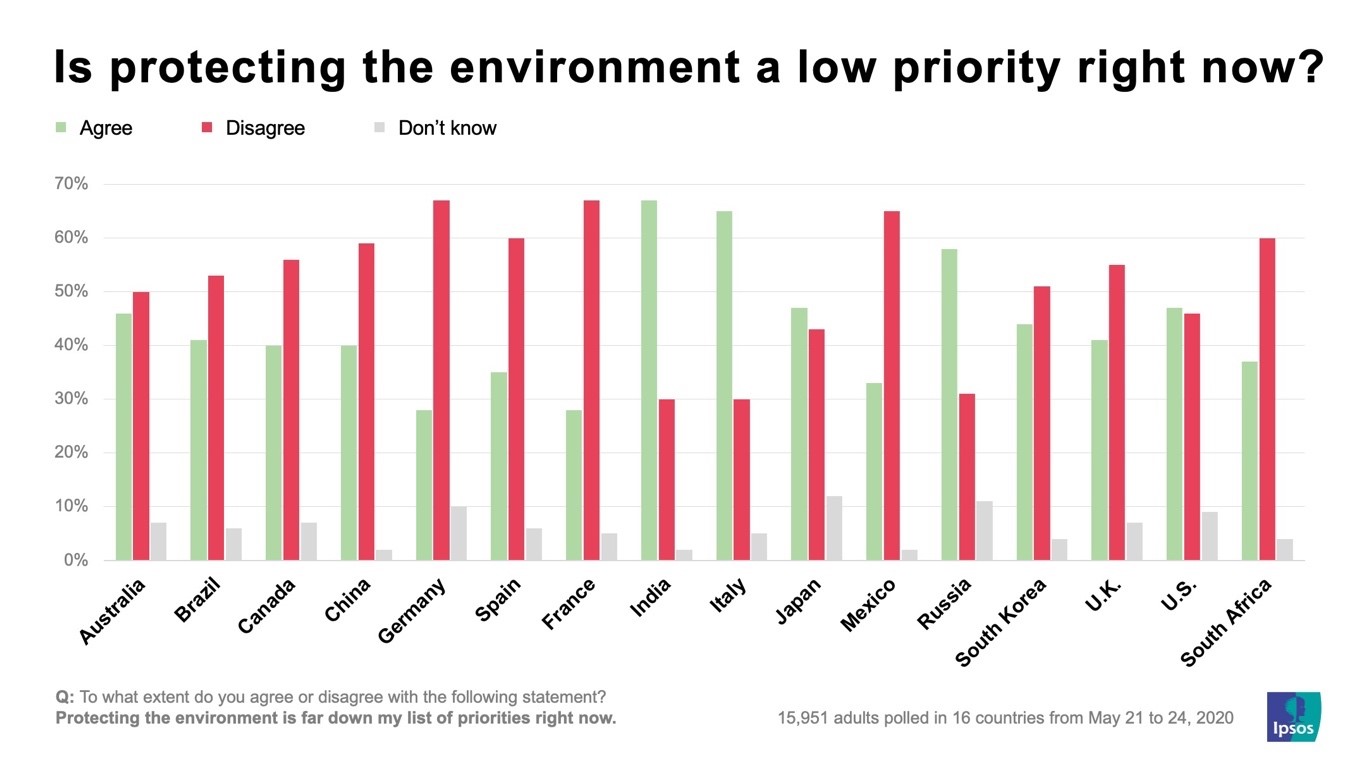 In terms of how seriously people view environmental issues, more than four in five respondents globally say issues such as pollution, degradation of nature, deforestation, overfishing and climate change pose a serious threat to our health and wellbeing today.

In Australia, 81% agree with this sentiment. 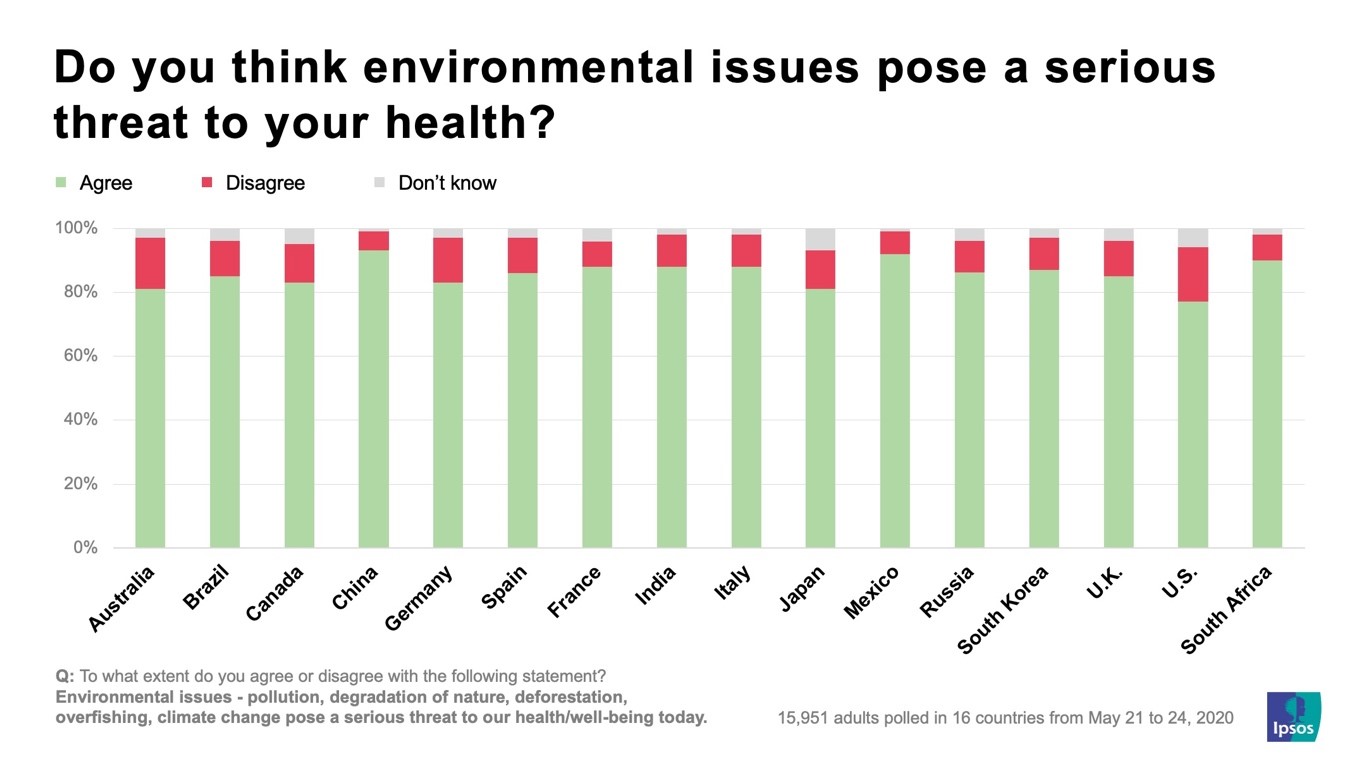 Overall, people feel a strong responsibility to ensure their generation does not destroy the planet for the next generation, and the figure is 81% in Australia. Agreement with this sentiment is close to 80% and over in all of the countries with China (92%) and South Africa (91%) at the top. 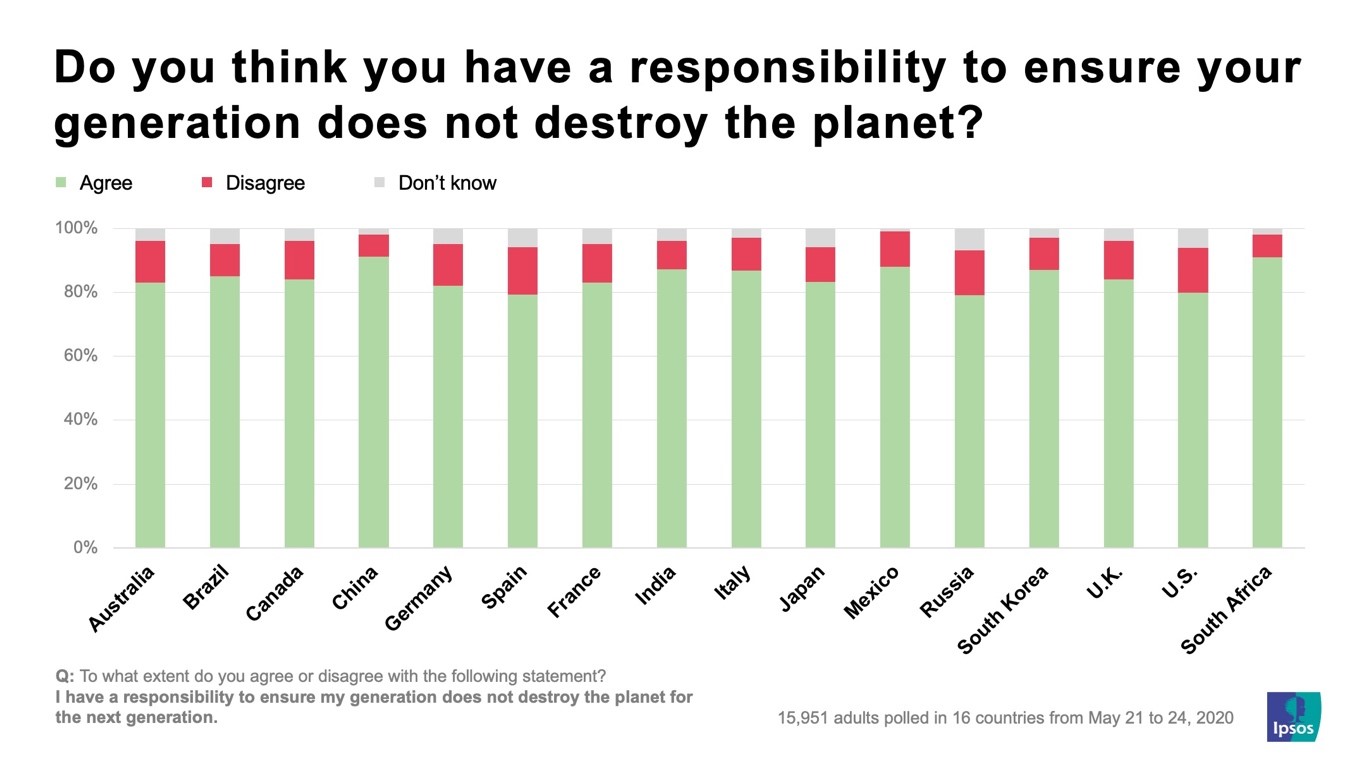 The sample for this study consists of approximately 1,000 individuals in each country. The samples in Australia, Canada, France, Germany, Italy, Spain, Japan, South Korea, the U.K. and the U.S. can be taken as representative of these countries’ general adult population over age 16 or 18 (as above) and under the age of 75. The sample in Brazil, China, India, Mexico, Russia, and South Africa is more urban, more educated and/or more affluent than the general population and should be viewed as reflecting the views of the more “connected” segment of the population. The data is weighted so that each market’s sample composition best reflects the demographic profile of the adult population according to the most recent census data.

Where results do not sum up to 100 or the ‘difference’ appears to be +/-1 more/less than the actual, this may be due to rounding, multiple responses or the exclusion of don't knows or not stated responses. The precision of Ipsos online polls is calculated using a credibility interval with a poll of 1,000 accurate to +/- 3.5 percentage points