Six in 10 Australians (62%) expect climate change will have a severe effect in their area over the next 10 years and globally across 34 countries more than 71%, including a majority in every single country, expect the same, a new study conducted by Ipsos for the World Economic Forum finds.

More than one-third globally (35%), and 29% in Australia expect to be displaced from their home as a result of climate change in the next 25 years.

Ipsos Public Affairs Director, Stuart Clark, said: “Most Australians don’t feel that their local areas have been severely impacted by climate change yet. Regional Australians are slightly more likely than those in capital cities to report that they’ve been impacted. It’s likely that many in our big cities feel that they’ve been insulated from the worst of the fires and floods Australia has endured in recent years.

“However, looking 10 years into the future, two-thirds of Australians expect to be severely impacted. That speaks to a rising tide of concern among the general population and likely support for resilience planning and initiatives.” 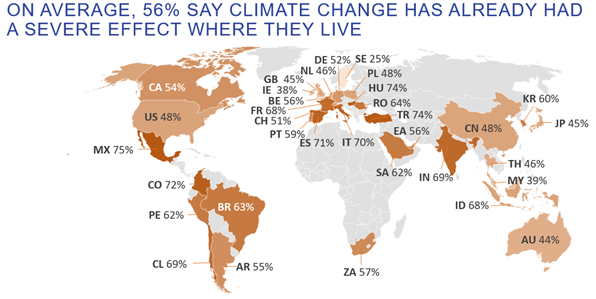 The proportion of adults surveyed describing the effect climate change has had so far in the area where they live as very or somewhat severe ranges from 25% in Sweden to 75% in Mexico, averaging 56% across all 34 countries (15% “very severe” and 41% “somewhat severe”).

Twenty-two countries show a majority reporting that they have already been severely impacted by climate change including nine countries where it exceeds two-thirds of all those surveyed: Mexico, Hungary, Turkey, Colombia, Spain, Italy, India, Chile, and France.

The survey finds notable regional differences within several countries where they were measured – likely reflecting recent experience with extreme heat, drought, forest fires, or floods. For example, the prevalence of having incurred severe effects of climate change is significantly higher than the national average in Greater London (vs. all of Great Britain), British Columbia (vs. all of Canada), the Western region of the United States, Southeastern France, Southern Germany, Northeastern Italy, and the Eastern part of Hungary.

Concern about being severely impacted by climate change in the next decade is expressed by most adults in every country surveyed – from 52% in Malaysia to more than 80% in Portugal, Mexico, Hungary, Turkey, Chile, South Korea, Spain, and Italy.

Across the 34 countries, an average of 35% say it is likely they or their family will be displaced from their home as a result of climate change in the next 25 years (10% “very likely”, 25% “somewhat likely”).

The samples in Argentina, Australia, Belgium, Canada, France, Germany, Great Britain, Hungary, Italy, Japan, the Netherlands, Poland, Portugal Romania, South Korea, Spain, Sweden, Switzerland, and the U.S. can be taken as representative of these countries’ general adult population under the age of 75.

The samples in Brazil, Chile, China (mainland), Colombia, India, Indonesia, Ireland, Malaysia, Mexico, Peru, Saudi Arabia, South Africa, Thailand, Turkey, and the UAE are more urban, more educated, and/or more affluent than the general population. The survey results for these markets should be viewed as reflecting the views of the more “connected” segment of their population. The data is weighted so that each country’s sample composition best reflects the demographic profile of the adult population according to the most recent census data.