More than three quarters (77%) of Australians surveyed consider themselves to be happy, according to the latest Ipsos survey on the global state of happiness. Compared to 2019, pre-pandemic, this is a fall of nine points for Australia, moving Australia from 2nd to 6th position on the Ipsos Global Happiness survey.

While the global average is almost unchanged from last year (down 1 point), Australia was one of a number of countries to show a decline of eight points or more: Peru, Chile, Mexico, India, the United States, Canada, and Spain.

Despite this significant decline for Australia, we still remain one of the happiest countries surveyed, with China on top at 93%, followed by the Netherlands (87%), Saudi Arabia (80%), Canada and France 78%).
Changes in Happiness Levels
Globally, the prevalence of happiness has remained nearly unchanged compared to what it was 2019: it dipped by just one percentage point from 64% to 63%. However, it has increased by five points or more in six countries, especially China and Russia, Malaysia, and Argentina, while it has decreased by five points or more in 12 countries, especially Peru, Chile, Mexico, and India.
The happiness leader in 2020 is China with 93% reporting to be happy (up 11 points from last year and moving up from third place), followed by the Netherlands (newly added this year) with 87%, Saudi Arabia with 80% (up two points).
Both of last year’s top countries, Canada and Australia, show a notable drop in the percentage of their citizens surveyed who report being happy: Canada with 78% (down eight points) drops to fourth place in a tie with France (down two points) and Australia with 77% (down nine points) falls to sixth place.
The survey shows precipitous decreases in the levels of happiness reported in Peru (down 26 points from last year to 32%), Chile (down 15 points to 35%) and Mexico (down 13 points to 46%). Happiness is now less prevalent in Peru, Chile and Spain (38% down eight points) than it is in Argentina (43%, up nine points), which ranked last in 2019. 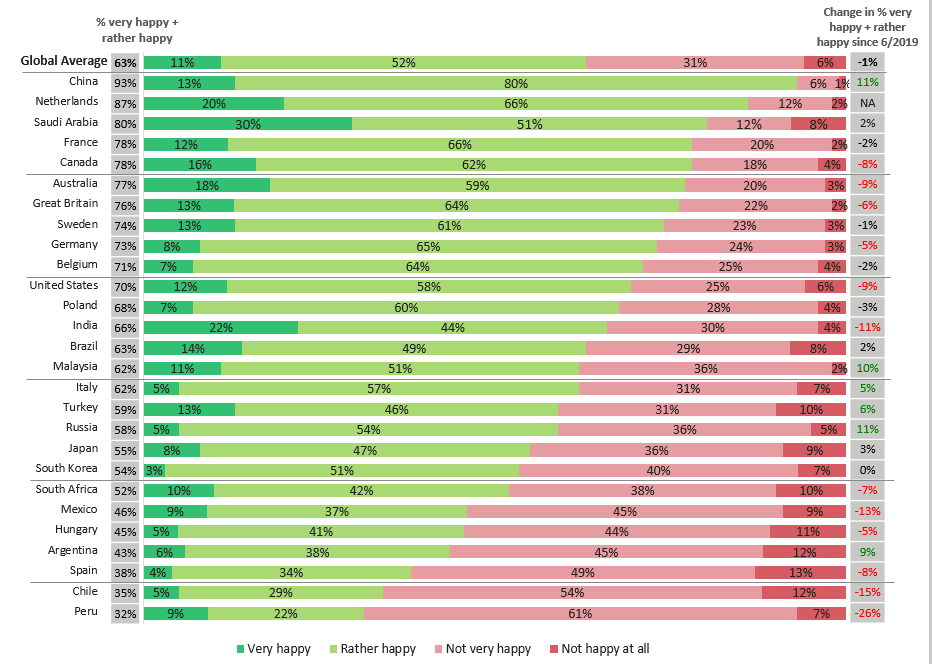 Australian findings
Among 29 potential sources of happiness measured, those surveyed in Australia were most likely to derive “the greatest happiness” from:
• My relationship with partner/spouse (47%)
• My health/physical well-being (43%)
• My children (42%)
• My living conditions (39%)
• Feeling my life has meaning (38%).

The big movers for Australia in the 2020 survey were: ‘having more money’ and ‘my personal financial situation’ (both down 10 points), ‘having a meaningful job/employment’ (down 9 points), ‘feeling in control of my life’ and ‘freedom to express my beliefs’ (both down 7 points). There were no strong positive movements in sources of happiness in Australia.

Ipsos Public Affairs Australia Deputy Managing Director, David Elliott, said: “Despite being one of the countries surveyed to have fallen the most in terms of the proportion who consider themselves to be happy, we continue to be one of the happiest nations. One of the interesting findings is that when you look individually at each of the 29 potential sources of happiness that we measure and you rank the countries, Australia sits differently depending on whether the ranking is based on total happiness, that is, ‘does our could give me the greatest source of happiness and some source of happiness’ or on the basis of the proportion who said ‘does our could give me the greatest source of happiness’. At the total level, Australia ranks quite highly but at the level of ‘greatest source of happiness’ Australia consistently ranks quite low.
“Being less likely than others to place a great deal of importance on a few key sources of happiness, but rather draw our happiness from a range of sources, might be the key to our resilience and greater propensity for happiness. If something happens to us, our country, or our world that impacts a small number of key aspects of our lives, we have a variety of other things from which we can derive our happiness.”

Key Global Findings
Six in ten adults across 27 countries (63%) consider themselves to be happy and despite the COVID-19 pandemic, the prevalence of happiness at an aggregate level is almost unchanged from last year. However, year over year, the incidence of happiness shows significant shifts in many countries: it has declined by eight points or more in Peru, Chile, Mexico, India, the United States, Australia, Canada, and Spain, while it has increased by more than eight percentage points in China, Russia, Malaysia, and Argentina.
The happiest countries surveyed, that is, those where more than three out of four adults report being very happy or rather happy are: China, the Netherlands, Saudi Arabia, Canada, France, Australia, Great Britain and Sweden. Those where fewer than one in two adults say they are happy are: Peru, Chile, Spain, Argentina, Hungary, and Mexico.
Among 29 potential sources of happiness measured, people across the world are most likely to derive “the greatest happiness” from:
• My health/physical well-being (cited by 55% globally)
• My relationship with partner/spouse (49%)
• My children (49%)
• Feeling my life has meaning (48%)
• My living conditions (45%).
In comparison to the pre-pandemic survey conducted last year, the sources of happiness that have gained in importance globally pertain to relationships, health and safety. On the other hand, time and money have ceded some ground as drivers of happiness.

Across all 27 countries, 11% of those surveyed say they are very happy and 52% rather happy, while 31% say they are not very happy and 6% not happy at all. Countries with the highest incidence of adults who consider themselves very happy are Saudi Arabia (30%), India (22%), and the Netherlands (20%). Those with the highest share of adults saying they are not happy at all are Spain (13%), Chile and Argentina (both 12%), and Hungary (11%).
Over the course of the past decade, the incidence of happiness has decreased sharply. Between 2011 and 2020, the percentage of those saying they are happy has fallen by 14 points globally. It is down by five points or more in 17 out of 23 countries surveyed both years. Mexico, Turkey, South Africa, Argentina, Spain and India show drops of more than 20 points. The only country showing a significant increase since 2011 is China (+15 points).

Sources of happiness in the COVID era
Among 29 potential sources of happiness, people across the world are most likely to say they derive “the greatest happiness” from:
• My health/physical well-being (cited by 55%)
• My relationship with partner/spouse (49%)
• My children (49%)
• Feeling my life has meaning (48%)
• My living conditions (45%)
• My personal safety and security (45%)
• Feeling in control of my life (43%)
• Having a meaningful job/employment (43%)
• Satisfaction with the direction their life is going (40%)
• Having more money (40%).

Compared with last year, the sources of happiness that have gained the most in importance globally pertain to relationships, health, and safety.
Year over year, many of items measured show a significant increase in the percentage of people globally who derive at least some happiness from them. Those with the largest upticks are:
• Being forgiven for something I did (+5 points)
• Forgiving someone for something they did (+ 4)
• My personal safety and security (+4)
• My health/physical well-being (+4)
• Finding someone to be with (+4).

None of the items show a jump of more than two points in the percentage of people who derive the greatest happiness from them. However, two items show a drop of three points:
• My personal financial situation
• The amount of free time I have.
In addition, one item shows a drop of three points as a source of either some or the greatest happiness:
• New political leadership in my country. 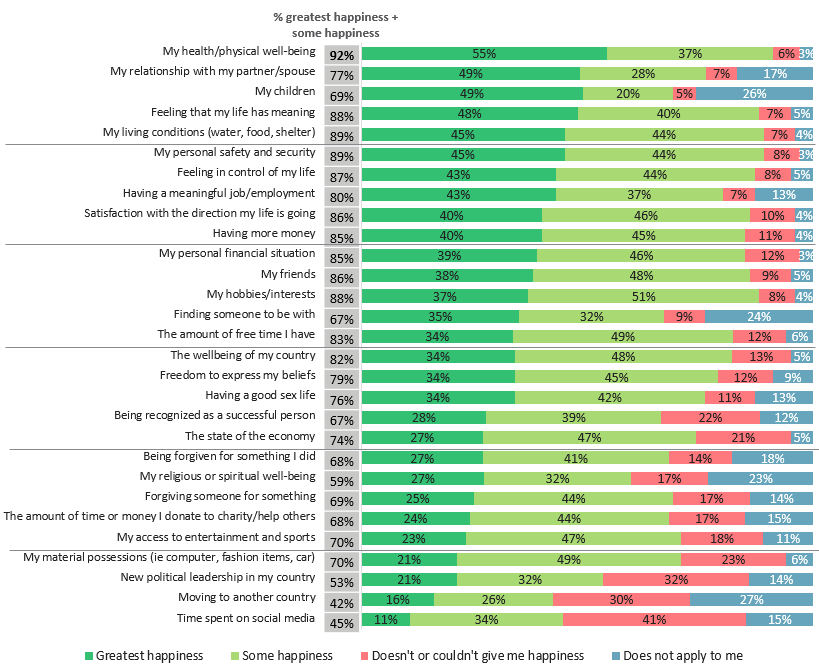 Universal vs. culture-specific drivers of happiness
The survey shows that the top sources of happiness tend to be universal. In 14 of the 27 the countries surveyed, each one of the top five sources of happiness, that is, those people most frequently say gives the “greatest happiness,” is among the top 10 sources at the global level. These countries include Brazil, Canada, Chile, China, India, Italy, Mexico, the Netherlands, Peru, Poland, South Africa, Spain, Sweden, and the United States.
However, in each of the other countries, at least one of the top five drivers of happiness is not to be found in the global top 10. Sources of happiness that are particularly important in just one or a handful of countries are:
• My personal financial situation (France, Hungary, Russia, South Korea)
• My friends (Australia, Belgium, Great Britain)

• My hobbies/interests (Japan)
• Finding someone to be with (Russia, Germany and Japan)
• The wellbeing of my country (Argentina)
• The amount of free time I have (Japan)
• Being recognised as a successful person (Turkey)
• The state of the economy (South Korea)
• My spiritual or religious well-being (Malaysia and Saudi Arabia).

About the Ipsos Study
These are the findings of a 27-country Ipsos survey conducted July 24 - August 7, 2020 among 19,516 adults aged 18-74 in the United States, Canada, Malaysia, South Africa, and Turkey and 16-74 in 22 other countries, via Ipsos’s Global Advisor online survey platform.
This study did not have any external sponsors or partners. It was initiated and run by Ipsos, because we are curious about the world we live in and how citizens around the globe think and feel about their world.
Each country’s sample consists of 1000+ individuals in Australia, Belgium, Brazil, Canada, China (mainland), France, Germany, Great Britain, Italy, Japan, Spain, and the United States, and 500+ individuals in Argentina, Chile, Hungary, India, Malaysia, Mexico, the Netherlands, Peru, Poland, Russia, Saudi Arabia, South Africa, South Korea, Sweden, and Turkey.
The samples in Argentina, Australia, Belgium, Canada, France, Germany, Great Britain, Hungary, Italy, Japan, the Netherlands, Poland, South Korea, Spain, Sweden, and the United States can be taken as representative of these countries’ general adult population under the age of 75.
The samples in Brazil, Chile, China (mainland), India, Malaysia, Mexico, Peru, Russia, Saudi Arabia, South Africa, and Turkey are more urban, more educated, and/or more affluent than the general population. The survey results for these markets should be viewed as reflecting the views of the more “connected” segment of their population.
Prior fieldwork waves were also conducted on Ipsos’s Global Advisor online survey platform. The June 2019 wave was conducted May 24 - June 7, 2019 among 20,327 adults in 28 countries. The February 2018 wave was conducted January 26 - February 9, 2018 among 19,428 adults in 27 countries. The March 2017 wave was conducted February 17 - March 3, 2017 among 18,523 adults in 26 countries. The May 2013 wave was conducted May 7 - 21, 2013 among 18,513 adults in 25 countries. The December 2011 wave was conducted December 6 - 19, 2011 among 21,245 adults in 24 countries.
The data is weighted so that each market’s sample composition best reflects the demographic profile of the adult population according to the most recent census data.
Where results do not sum to 100 or the ‘difference’ appears to be +/-1 more/less than the actual, this may be due to rounding, multiple responses or the exclusion of don't knows or not stated responses.
The precision of Ipsos online polls are calculated using a credibility interval with a poll of N=1,000 accurate to +/- 3.5 percentage points and a poll of N=of 500 accurate to +/- 4.8 percentage points.