The survey was conducted among 22,534 adults under the age of 75 conducted between February 18 and March 4 on Ipsos’s Global Advisor online survey platform.

The Demographics of Social Trust

Globally, the propensity to trust others is greater among those who are business decision-makers, holders of a higher education degree, married, older, male, and affluent. 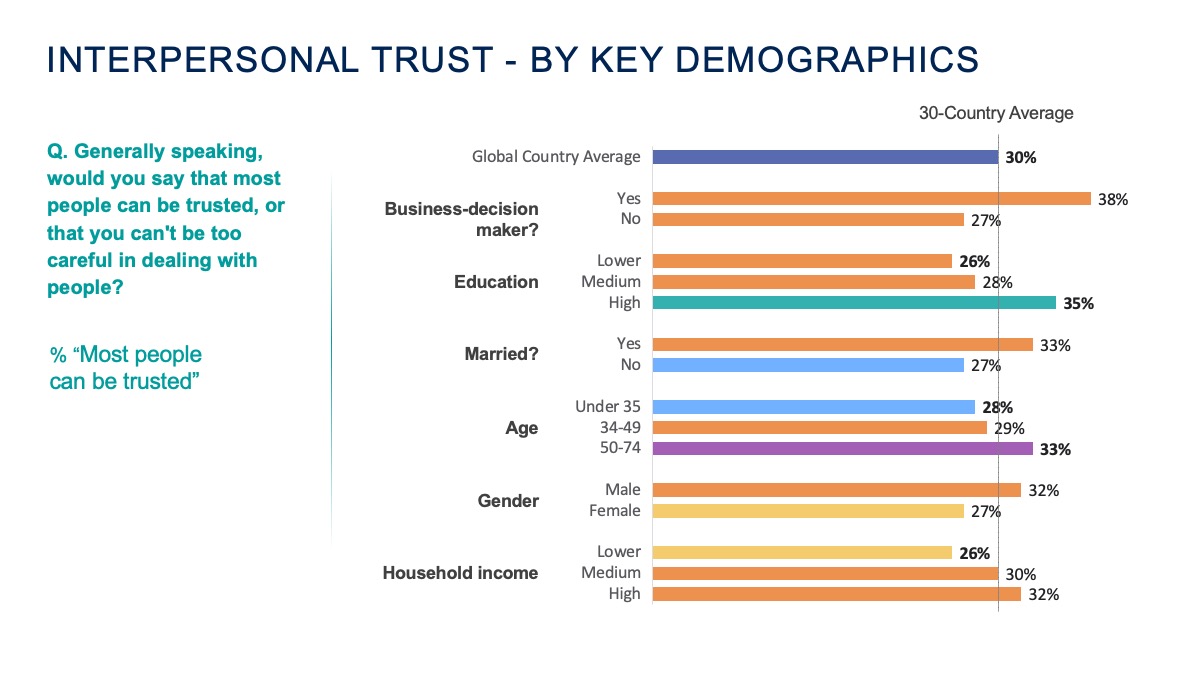 Both at a global level and in most countries, the managerial class tends to be significantly more trusting of others. On average, the percentage of those who say most people can be trusted is 11 points higher among self-identified senior executives, decision-makers, or leaders in their company and others.

In most countries, married adults are more likely to be trusting of other people than those who are not married (33% vs. 27% on average across the 30 countries).

Finally, in most countries, males tend to be more trusting of other people than are females as on average, 32% of men say most people can be trusted vs. 27% of women – a 5-point difference.

Within most countries, the prevalence of interpersonal trust increases with people’s household income. On average, 32% of those who fall in their country’s upper-income group tend to trust others vs. 30% with a medium income and 26% of those with a lower income.

Interpersonal trust is highly correlated with both consumer confidence and personal happiness.

We compared the percentage saying most adults can be trusted in 23 countries with Ipsos’s Consumer Confidence Index for each of these countries—a composite metric indicative of consumers’ perceptions about their current and prospective financial situation, purchasing comfort, and economic, jobs, and investment environment. We found that these two metrics are very highly correlated[1].

These are the findings of a 30-country Ipsos survey conducted February 18 – March 4, 2022, among 22,534 adults aged 18-74 in the United States, Canada, Ireland (Republic), Malaysia, South Africa, and Turkey, and 16-74 in 24 other countries, via Ipsos’s Global Advisor online survey platform.