Ever imagined how your dream house would look like? Owning a house is on the wish-list of most people. But buying a house can be a very costly affair considering the sky-rocketing housing prices around the world. Even after saving every single penny to turn this dream into a reality, lack of affordable housing has become the Achilles heel for home buyers and governments across the globe. A combination of low interest rates, growing population, restricted housing supply and foreign buyers have pushed housing prices beyond the reach of many  ̶  especially first-time homebuyers  ̶  as incomes have not increased at such a rapid pace.

Global Market Research firm Ipsos, for the very first time, conducted a Real Estate Affordability survey of more than 20,000 people across 29 countries. The survey revealed that globally nearly three in five people (58%) say it is unlikely that they can afford to buy a home in their local market.

In Malaysia, the survey was conducted among respondents that are more urban & educated, and with higher incomes than their fellow citizens. They are referred to as the Upper Deck Consumer Citizens. 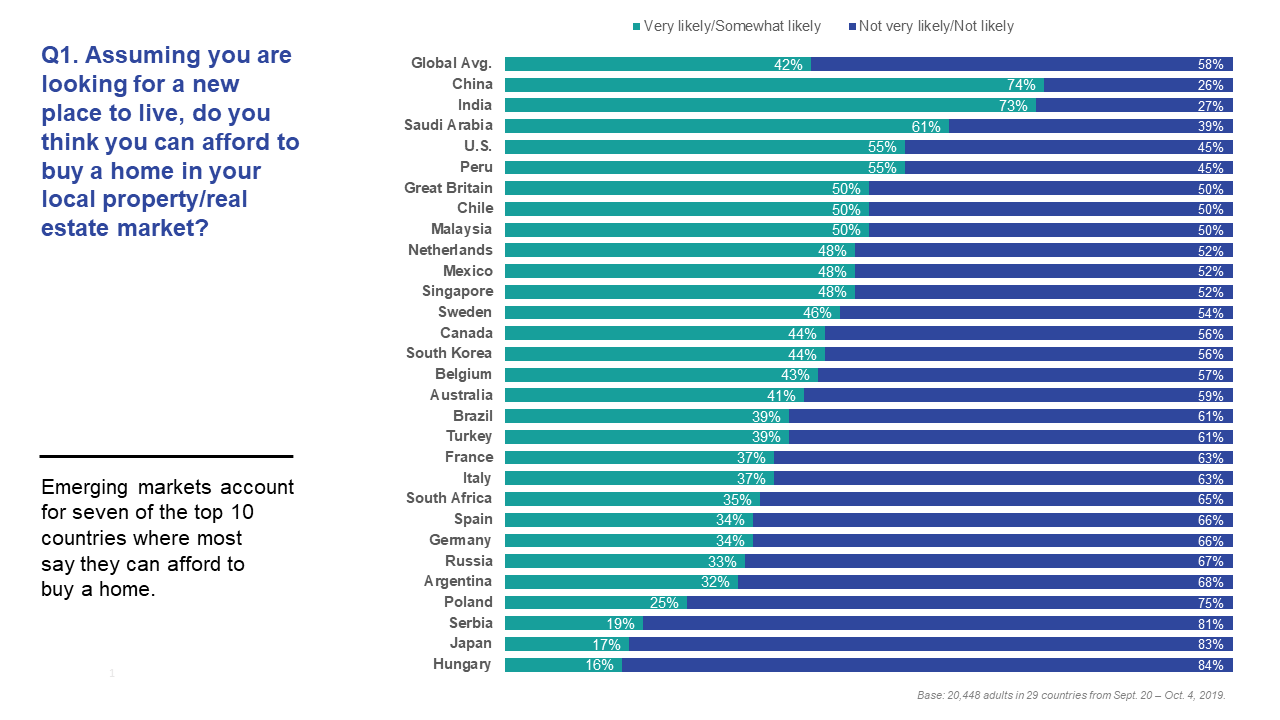 The recently released Real Estate Affordability report shows a split result when it comes to affordability to buy a home in Malaysia. 50% Malaysians feel that they are likely to afford to buy a house. This result may be higher than the global average (42%), but is quite dismal when compared to China and India; where close to two-thirds of the respondents were positive about affording a house. 74% Chinese and 73% Indians feel that they are likely to afford a house in their respective country. The top countries where most said they were priced out of the market were Hungary (84%), Japan (83%), Poland (75%), Argentina (68%) and Russia (67%). 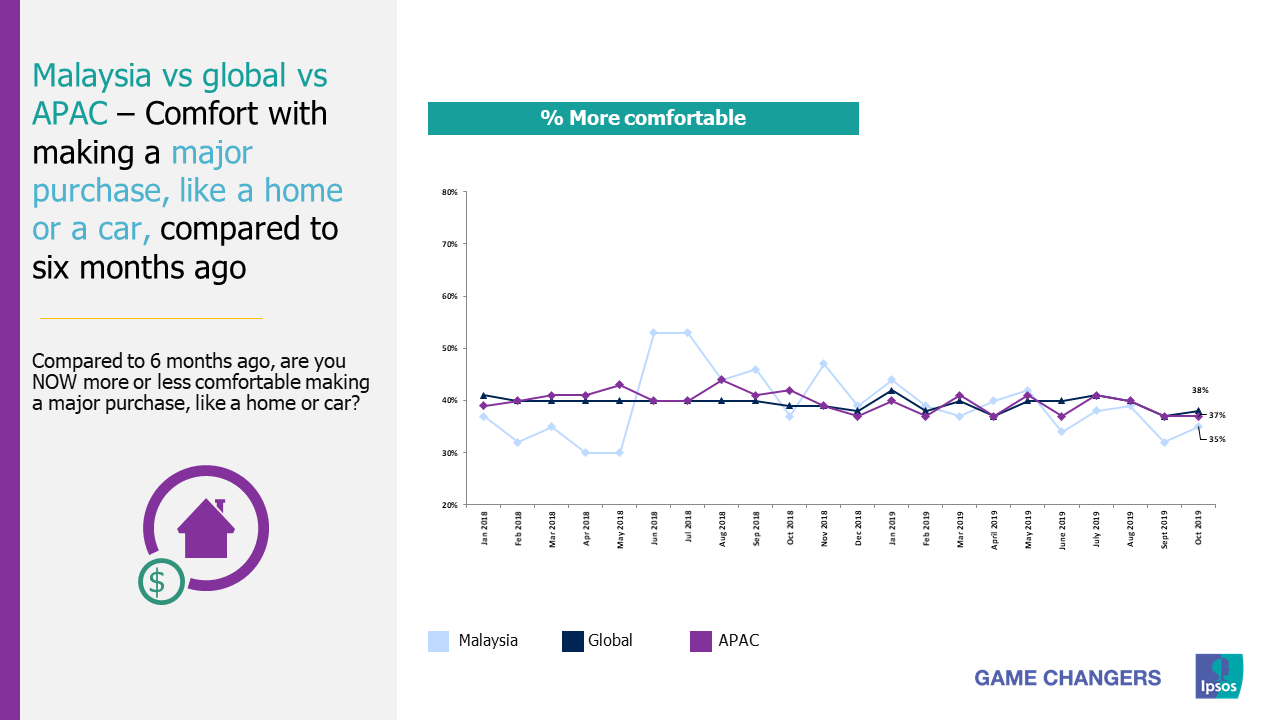 What’s more, compared to six months ago, Malaysians (compared to consumers in the APAC region) are less comfortable making a major purchase like a home or a car. For Malaysians, comfort with making major purchases peaked during the period May-July 2018 just after the General Elections. Decline in big-ticket purchases clearly shows that Malaysians are less optimistic of the future. 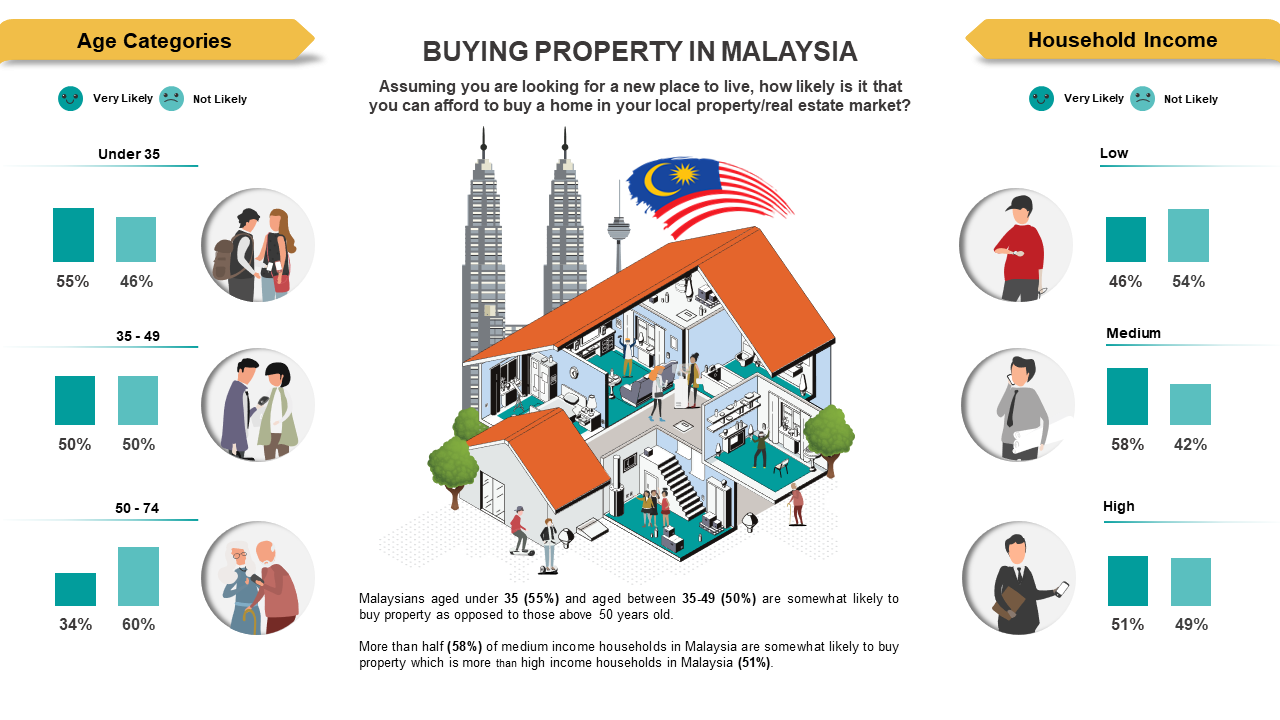 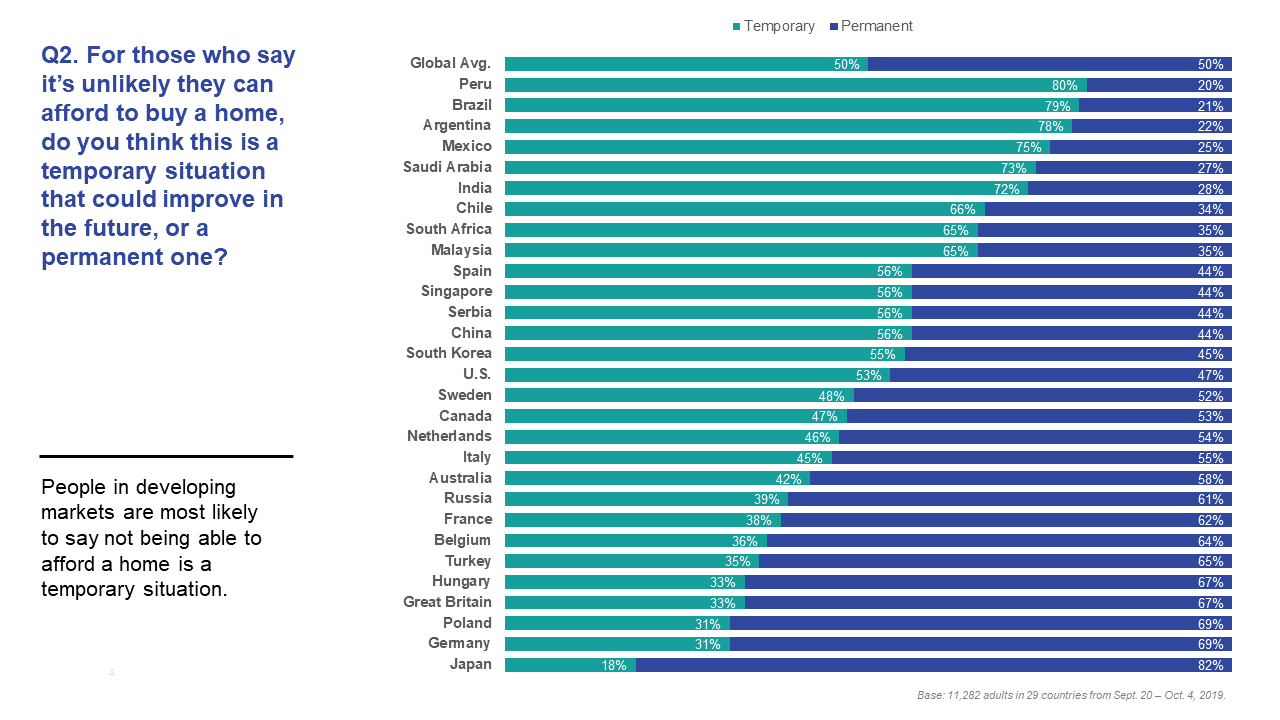 The study further revealed that only 35% Malaysians felt that not being able to afford to purchase a home is a permanent situation. In comparison 44% respondents in both China and Singapore felt that they are unlikely to afford to buy a home and this situation will remain permanent in the future.

Of those respondents who said it is unlikely they can afford to buy a home, more people in emerging markets said this was a temporary situation that could improve in the future, with Peru (80%), Brazil (79%), Argentina (78%), Mexico (75%), Saudi Arabia (73%) and India (72%) at the top of the list. 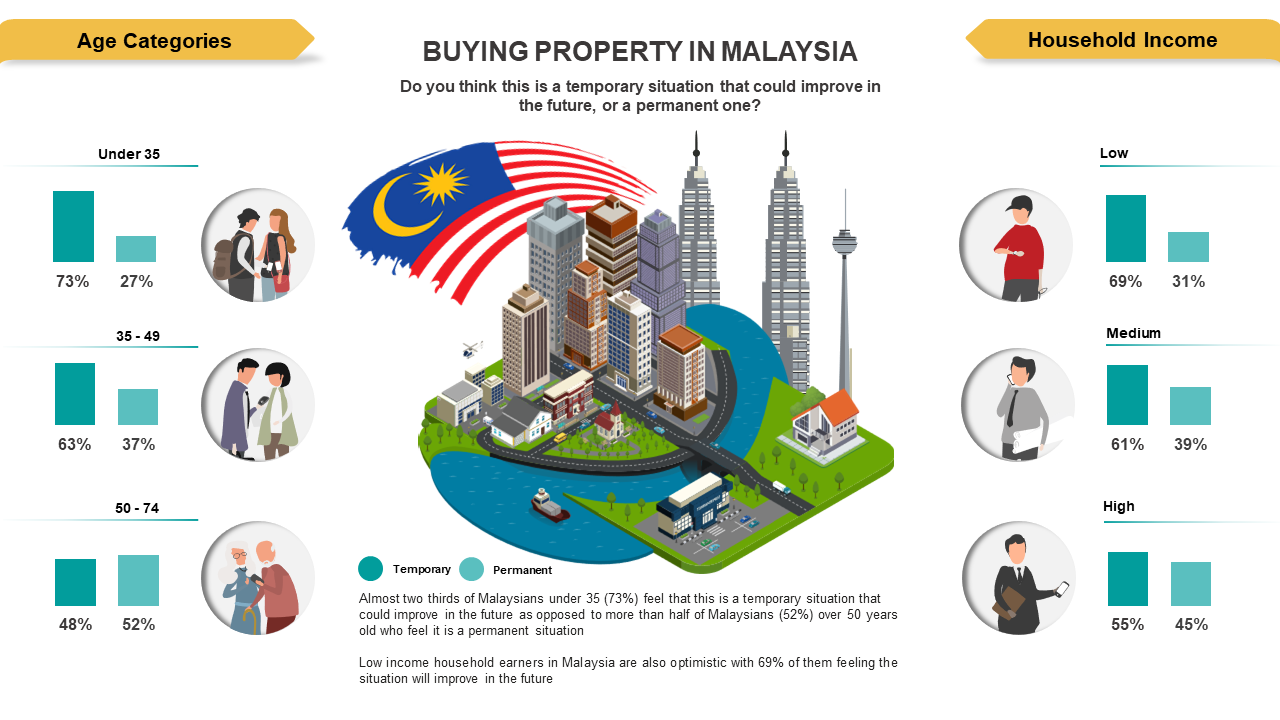 Demographically, almost two-thirds of Malaysians under the age of 35 (73%) feel, that not being able to buy a house is a temporary situation, which is likely to improve in the future. On the other hand, more than half of Malaysians (52%) over 50 years old feel that lack of affordability will continue to remain a permanent situation in the future as well.

“The demand for real estate is mainly dependant on rising incomes, interest rates and demographic trends. All these factors have developed favourably in Malaysia in the last few years. However, the housing sector is now seeing a trend reversal. And the main reason behind this is lack of affordable housing. The worst hit due to the spiralling housing prices are the salaried people who are either postponing or altogether shelving their buying decision. If this trend continues then there is a danger of increased demand-supply gap, and then builders would have had no option but to reduce their prices to get back returns on investments, thereby setting off a vicious cycle in the process.”

These are the findings of the Global Advisor Wave 132, an Ipsos survey conducted between September 20 - October 4, 2019.

For the results of the survey presented herein, an international sample of 20,448 adults ages 19-74 in South Korea, 18-74 in the United States of America, Canada, China, Malaysia, South Africa and Turkey, and ages 16-74 in all other countries, were interviewed. Approximately 1000+ individuals participated on a country by country basis via the Ipsos Online Panel, with the exception of Argentina, Belgium, Chile, Hungary, India, Israel, Malaysia, Mexico, Peru, Poland, Russia, Saudi Arabia, South Africa, South Korea, Sweden and Turkey, where each have a sample approximately 500+.

Brazil, China, Chile, India, Malaysia, Mexico, Peru, Russia, Saudi Arabia, South Africa and Turkey produce a national sample that is more urban & educated, and with higher incomes than their fellow citizens. We refer to these respondents as “Upper Deck Consumer Citizens”. They are not nationally representative of their country.

Weighting was then employed to balance demographics and ensure that the sample's composition reflects that of the adult population according to the most recent country Census data, and to provide results intended to approximate the sample universe. A survey with an unweighted probability sample of this size and a 100% response rate would have an estimated margin of error of +/- 3.1 percentage points for a sample of 1,000 and an estimated margin of error of +/- 4.5 percentage points 19 times out of 20 per country of what the results would have been had the entire population of adults in that country had been polled. All sample surveys and polls may be subject to other sources of error, including, but not limited to coverage error, and measurement error.