In the wake of the haze crisis engulfing the region, Ipsos conducted a study in Malaysia, Indonesia and Singapore to understand the impact of haze on regular life and public perception of the effectiveness of private/public measures.

The Ipsos study revealed that 78% of Malaysians who had participated in the survey are very concerned with the air quality in their locality. On the social media space, Malaysia accounts for the largest social media share of voice (87%) regarding haze crisis, as many are appalled by the situation.

The topic that concerns social media discussions are the "Impact on Health" followed by "Impact on Education". Respiratory tract infection, such as asthma, is observed to be the key medical issue which many social media discussions have raised concerns about. More than 80% of health-related conversations are about respiratory tract infections and breathing problems, whereas less than 20% of total conversations are about eye infection and headache/migraine. 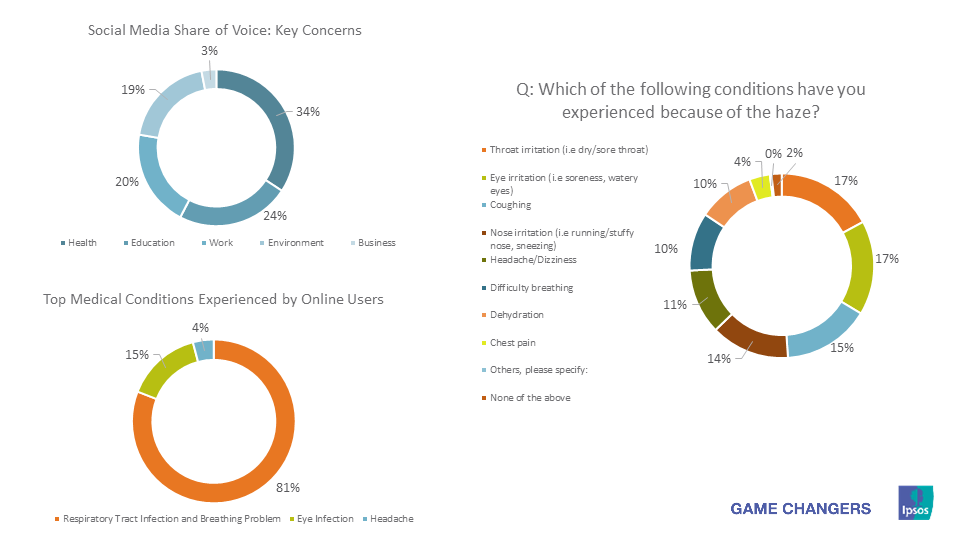 The Ipsos survey further revealed that citizens are taking concrete steps to protect themselves and their families from the severe haze. While 88% of Malaysians are drinking more water than usual, 84% prefer to stay indoors when not at work/school. 79% of Malaysians polled (among those who have children) are keeping the children inside to keep them protected from the haze.

Analysis on social media discussions reveal that wearing a face mask is seen to be the most practical solution to prevent and lessen the onset of medical conditions due to haze. Government authorities, healthcare professionals and social media influencers are therefor actively disseminating information regarding the importance of using the correct type of mask (N95) in order to effectively protect public from harmful air pollutants. There had been prominent conversations around the type of mask which is apt for haze avoidance and N95 gets high mentions by netizens. 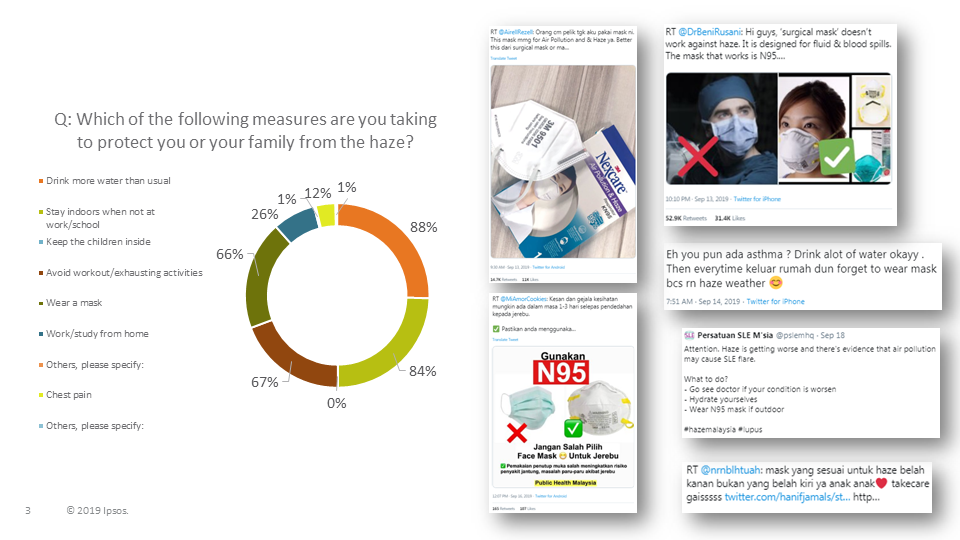 The top 3 control measures which garnered highest social media public's reaction were scholl closure, employee welfare and cloud seeding. But netizens felt that these quick fixes were implemented in a very haphazard manner. Parents (working adults) seemed to be worried about school closure, impacting routine life and work-schedules. Also students were worried that their learning progression will be delayed. Employees showcased uneasiness by the inconvenience caused haze, while some were displeased by the absence of a clear employment policy regarding the issue. Cloud-seeding exercise evoked polarised reactions on social media. While some netizens were hoping the cloud-seeding exercise would provide an immediate relief, some expressed disagreement as they felt it may cause potential long-term harm to the environment.

When it comes to public perception towards the Malaysian government initiatives in controlling the haze, only 25% of survey participants feel that the government has been dealing effectively with the haze issue. Lack of preparedness in managing the haze crisis, which has become an annual problem and absence of concrete measures to prevent recurrence in the future has contributed to this perception.

Overall Malaysians feel (84%) that Indonesian authorities and (75%) ownner of the land where the fire happens carry the biggest responsibility of dealing with the haze problem. They believe in  the long-term measures such as legally pursuing companies involved in crisis (80%) and cross-national policies or pressure on Indonesia govt (74%) will be effective.

Clean air is a human right. So, instead of implementing short-term fixes against the crisis, Malaysian citizens are in hope of long-term and assertive measures from the government to prevent the recurrence of haze next year. Haze-avoidance is a bigger task to take on vis-a-vis haze-control.

The survey data comes from an Ipsos survey conducted in September 2019.

400+ individuals participated in the survey via the Ipsos Online Panel.

The online panel produced a national sample representation of the population.

The study covers data captured across all public social media platforms such as Twitter, forums, online news media and others. More than 100,000 of social media mentions are analysed.