Ipsos Malaysia conducted a new nationwide study to understand how Malaysians feel about Vision 2020. The study revealed that even though most citizens are proud to be Malaysians, but not many think the country will achieve Vision 2020. 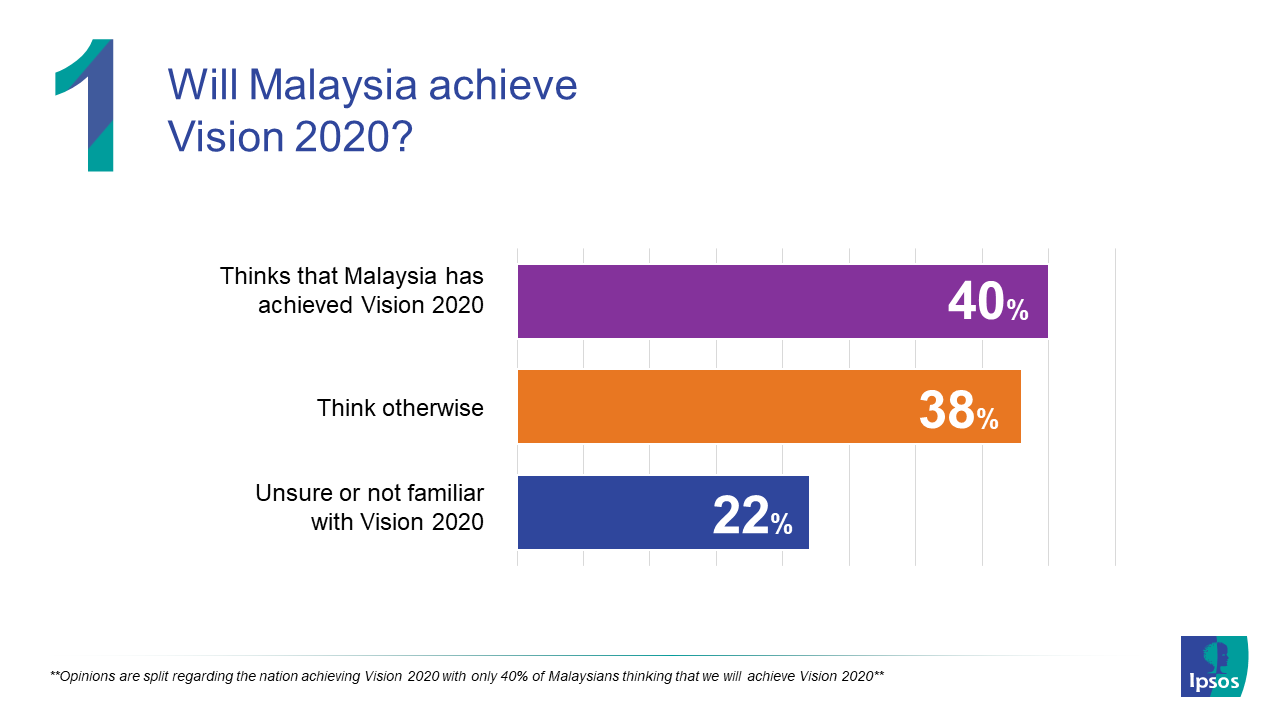 Opinions are split regarding the nation achieving Vision 2020; with only 40% Malaysians thinking that the country will achieve the same. Surprisingly, even after 3 decades, 22% Malaysians are still unsure or unfamiliar with what Vision 2020 is or plans to achieve. However, the bright side is that 89% of those polled are proud of the fact that they are a Malaysian. 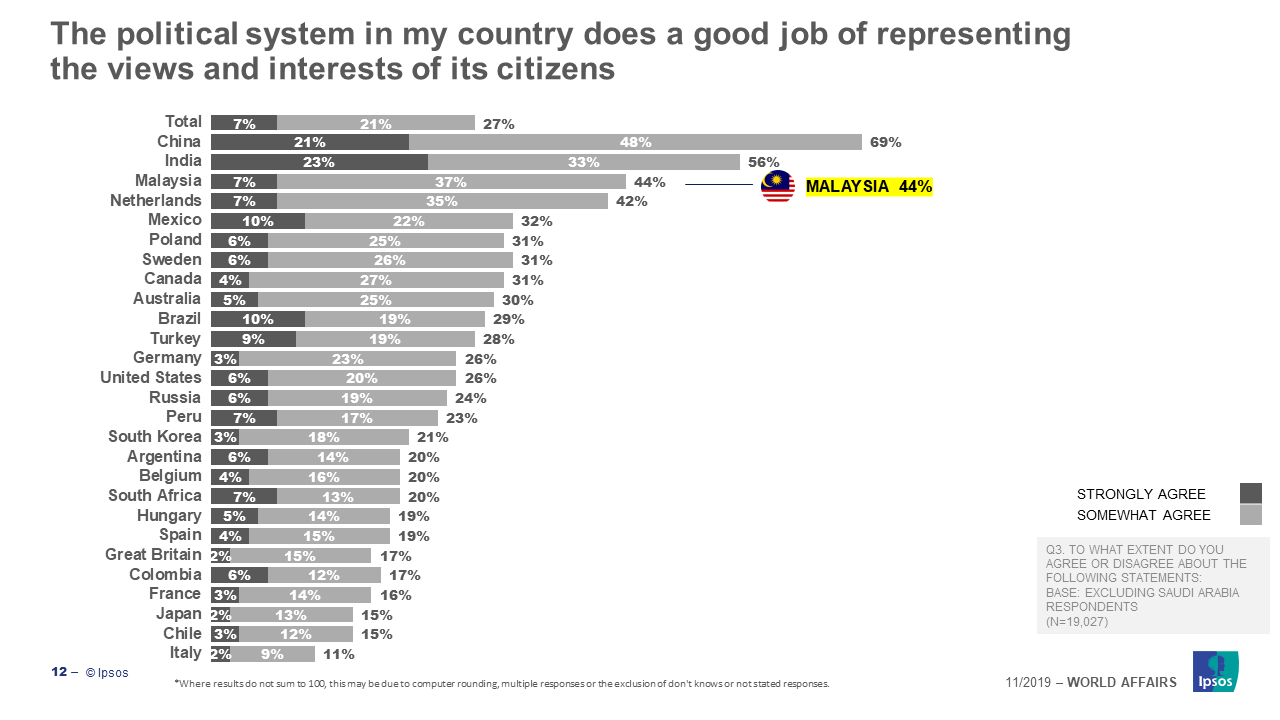 When asked what Malaysia has done successfully to achieve Vision 2020, 62% of those polled agree that Malaysia has successfully fostered and developed a mature democratic society. This is supported by the World Affairs Study done by Ipsos in November 2019 which revealed that 44% Malaysians agree that the political system in the country does a good job of representing the views and interests of its citizens. This is much higher than global average of 27% and is just behind China (69%) and India (56%). 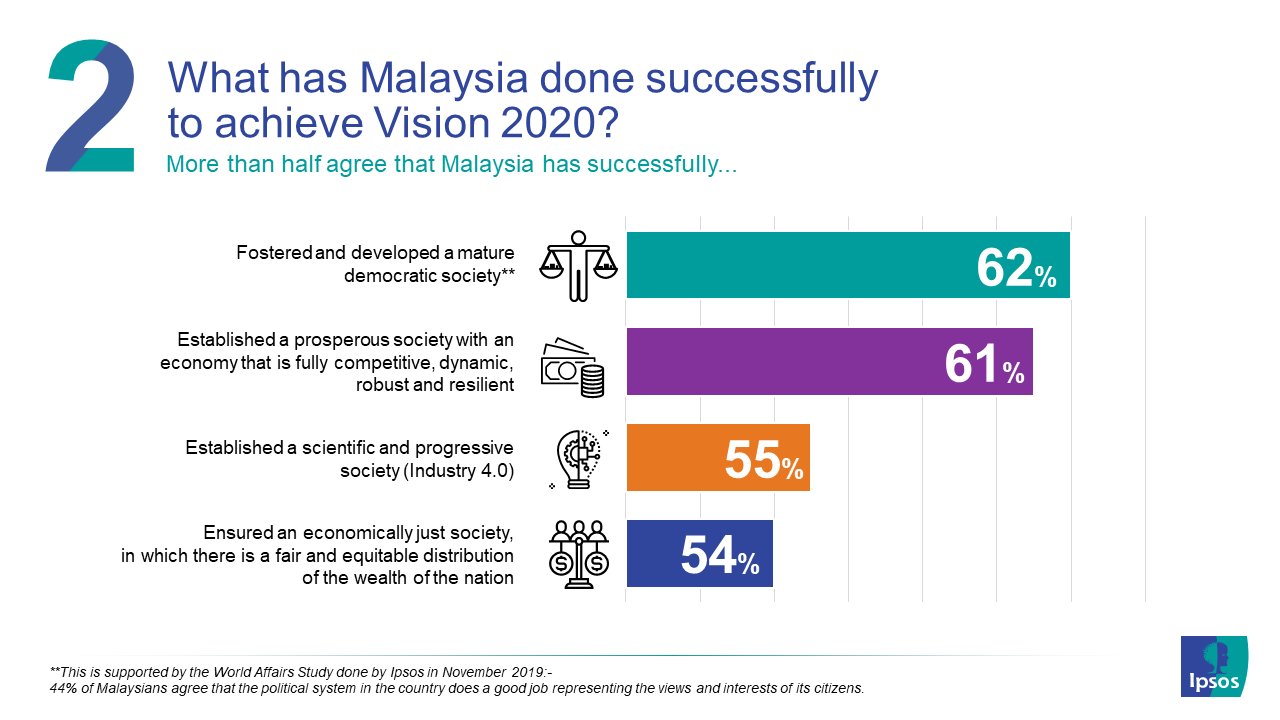 What’s more, the Ipsos Malaysia study further revealed that more than half of those polled agree that Malaysia has successfully established a prosperous society with an economy that is fully competitive, dynamic, robust and resilient (61%), established a scientific and progressive society (55%) and ensured an economically just society, in which there is a fair and equitable distribution of the wealth of the nation (54%). 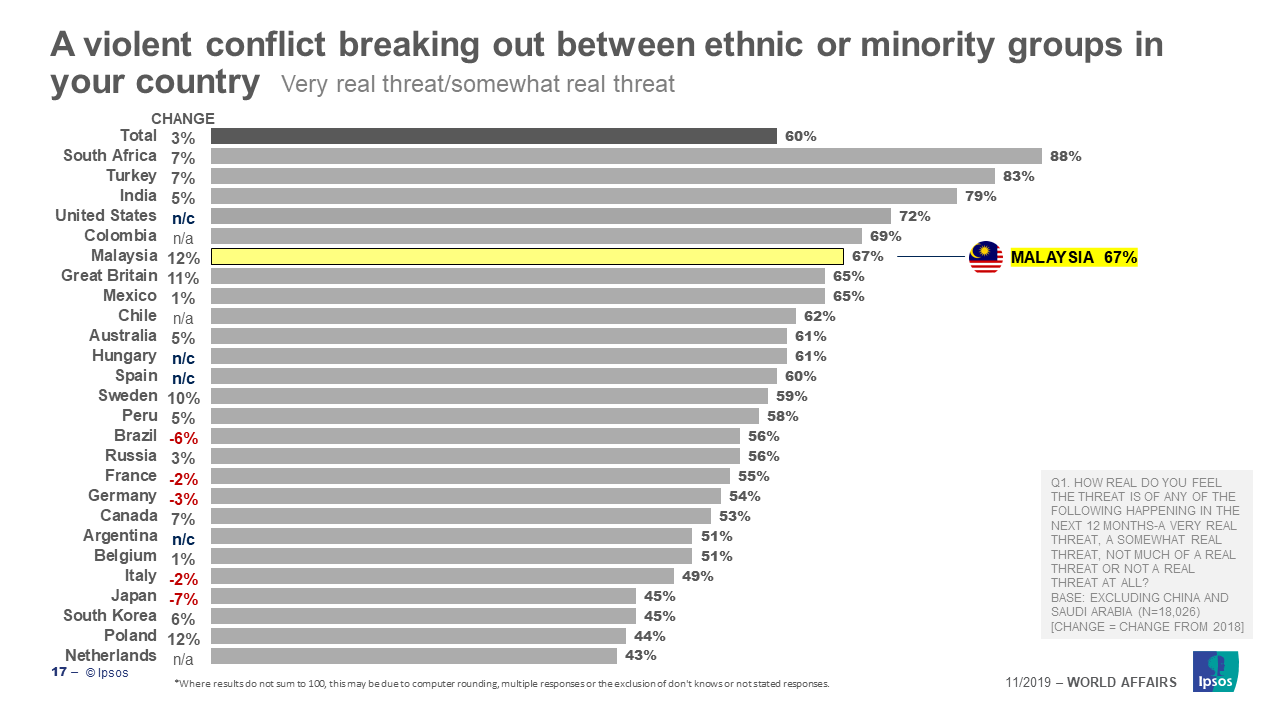 Moving forward, Malaysians are quite worried when it comes to concerns related to national unity and safety. As per the Ipsos World Affairs Study, majority Malaysians are worried about eruption of violent conflicts between ethnic or minority group in the country is quite real. Threat of conflict between ethnic or minority groups is high in Malaysia (67%) compared to global average of 60% and 65% in UK. For Malaysians, this threat is quite significant as it has risen by 12% in just a span of one year. Malaysia is 6th in the pecking order after South Africa (88%), Turkey (83%), India (79%), United States (72%) and Colombia (69%). 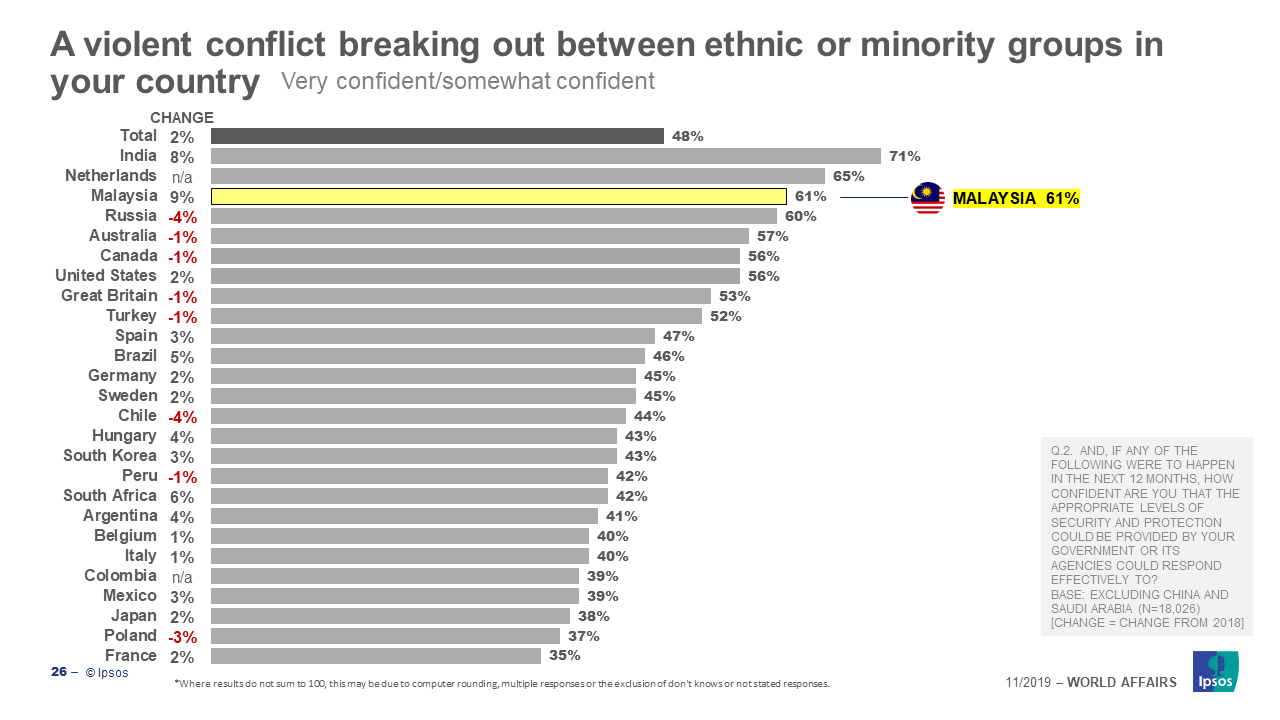 Although there is a genuine concern, more than half of Malaysians (61%) are confident that appropriate levels of security and protection would be provided by the government and its agencies if a violent conflict were to break out in the next 12 months between ethnic or minority groups in the country. This shows the confidence that Malaysians have in the government in handling such conflicts. 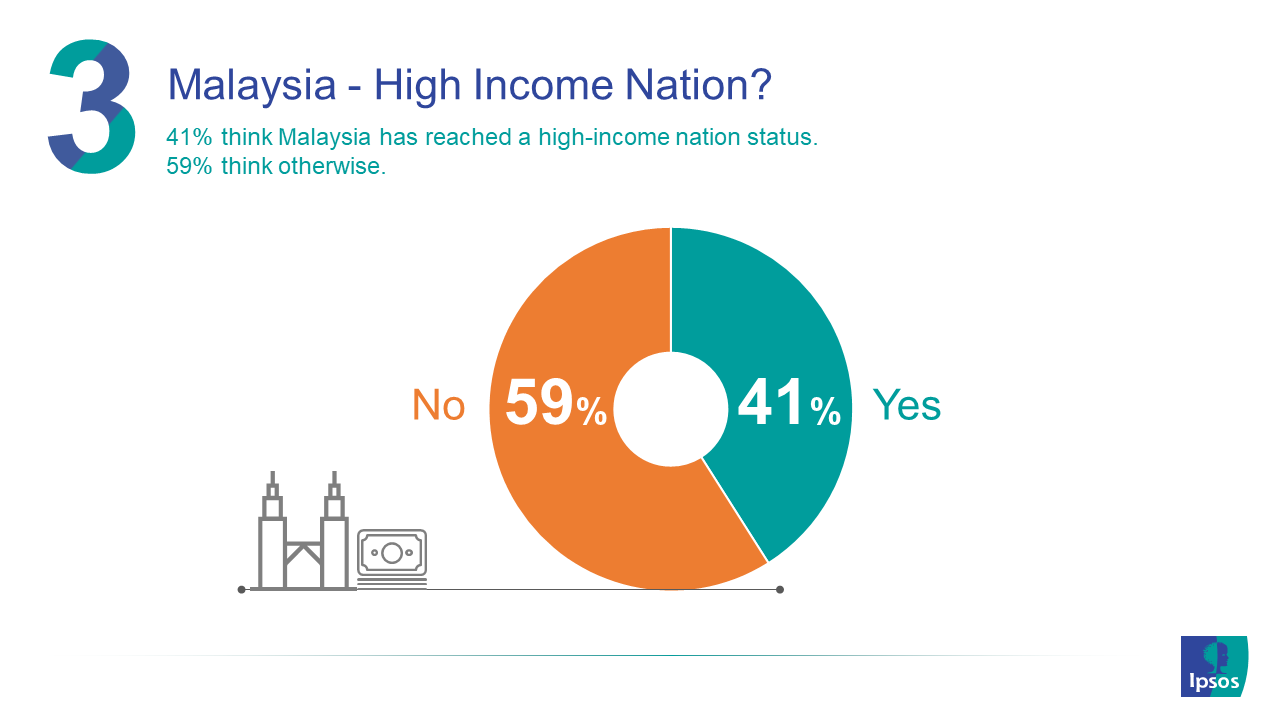 Ipsos Malaysia study further revealed that 59% Malaysians do not think that they have reached a high-income nation status. However, more than half (58%) Malaysians believe that Malaysia's overall economy will improve in the next one decade. While 39% believe that the overall economy would maintain status-quo in the next 10 years, only a small minority of 3% think that the Malaysian economy would worsen by 2030. This clearly shows that most Malaysians are quite optimistic about the next decade. 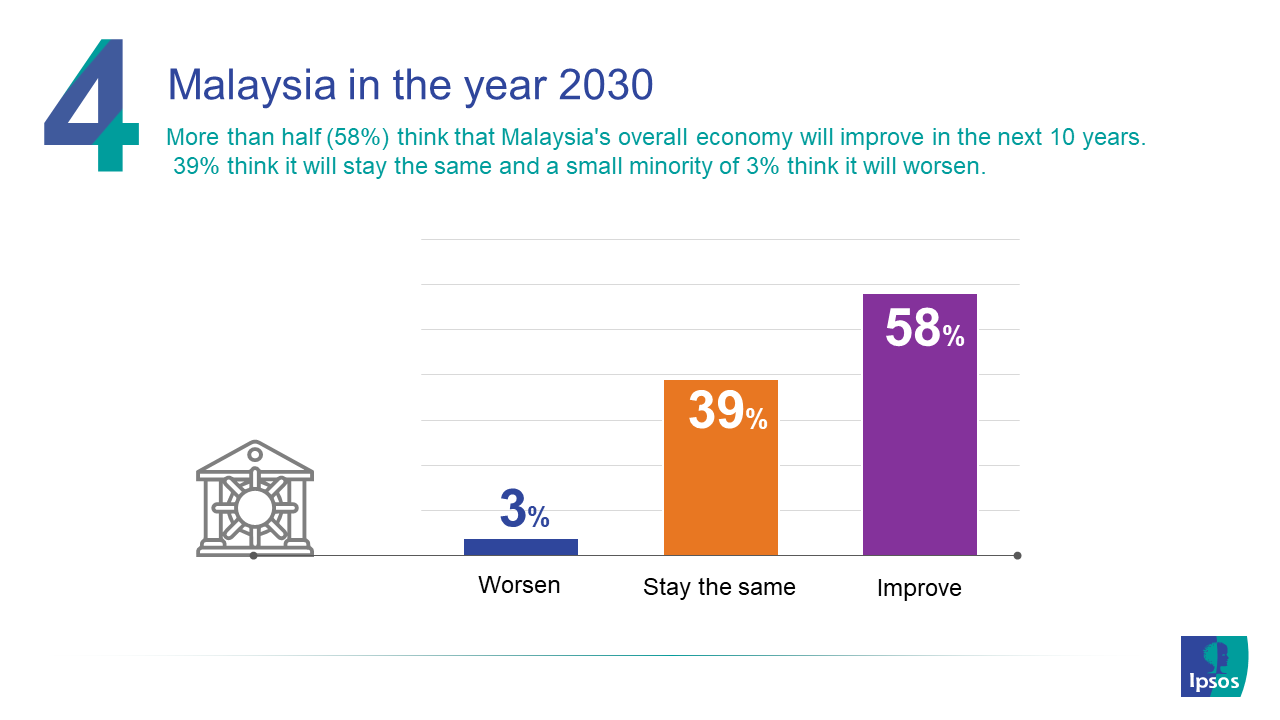 When it comes to global aspirations, the Ipsos World Affairs study revealed that Malaysians are quite positive in their outlook. 90% of Malaysians agree that Malaysia should work towards global goals, even if the country does not always get what it wants. This is in stark contrast as current global situations like US-China trade war and Brexit are putting a dampener on the global economic environment. The optimistic viewpoint of Malaysians has put the country right on top of the table among the nations surveyed and 11% higher than the global average of 79%. 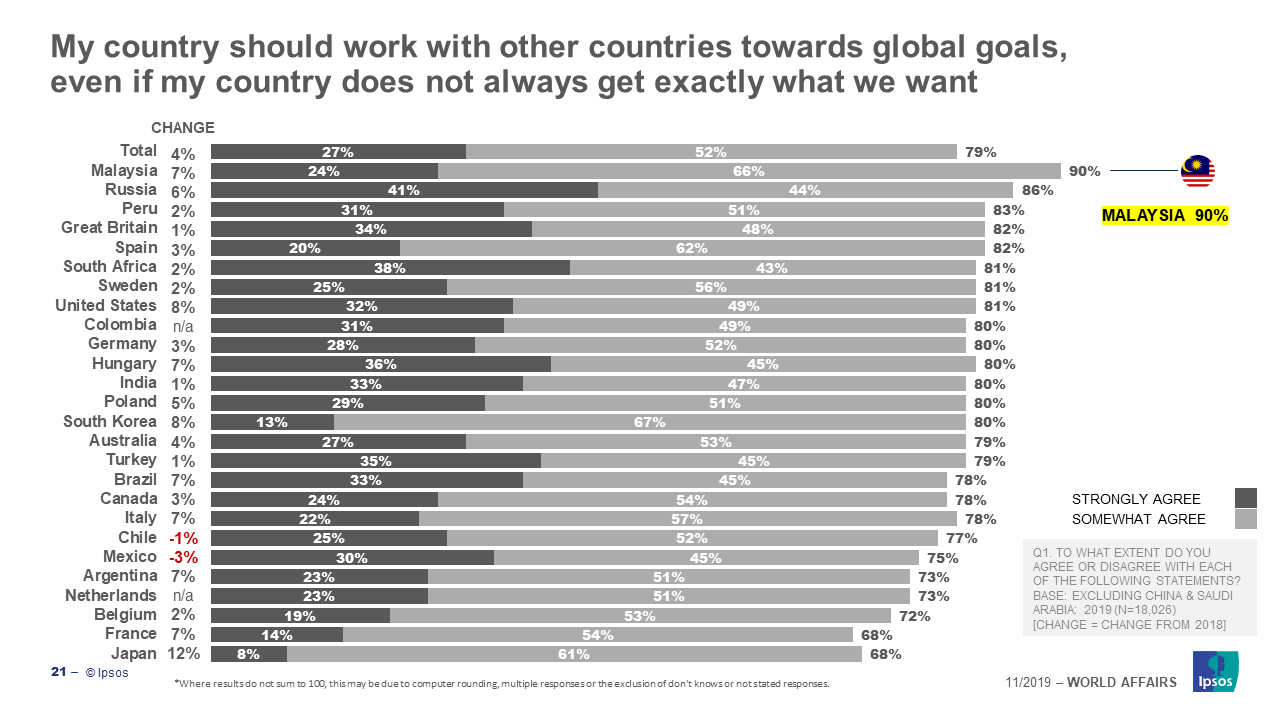 The Ipsos World Affairs study further revealed that a little over half of the Malaysians polled (51%) feel that China offers a political and economic model that they would like to emulate as opposed to the United States (35%). This is higher than the global sentiment of 39% who feel China is the country to emulate. 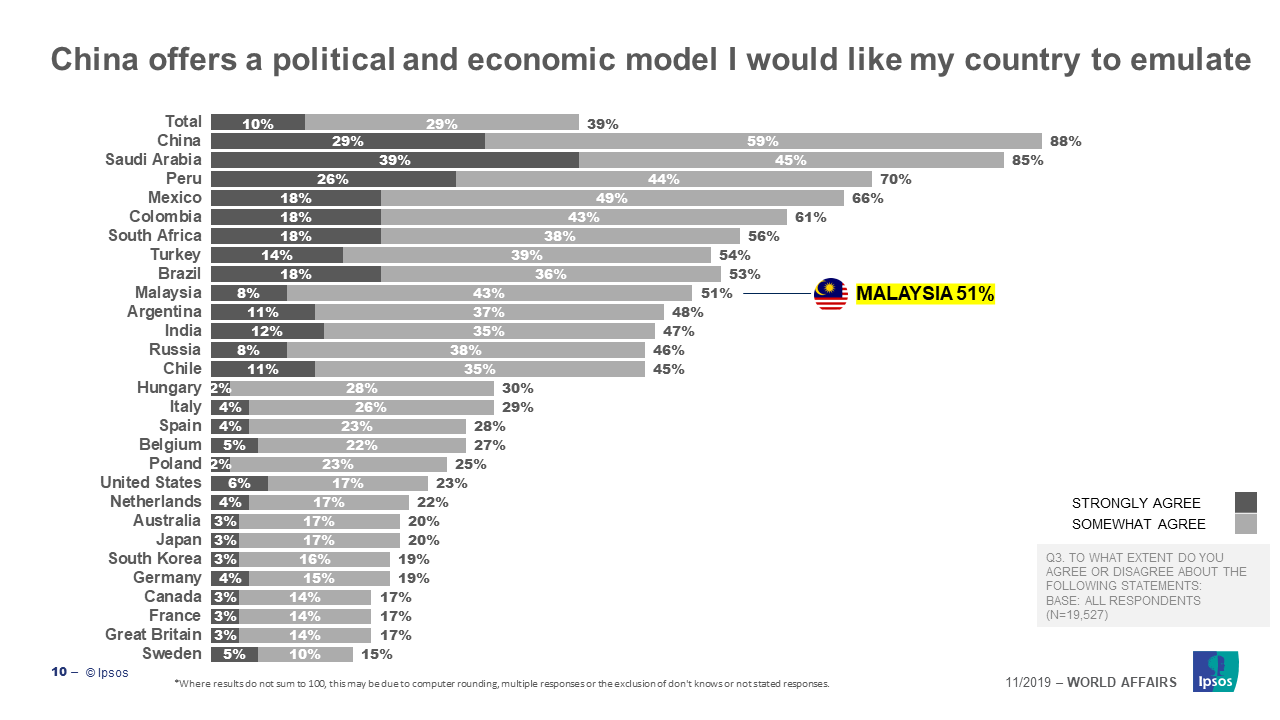 “Wawasan 2020 was undoubtedly a visionary thought conceived by the government almost 3 decades ago. It created a roadmap for Malaysia to achieve the status of a fully developed nation. In the last 30 years, Malaysia has grown by leaps and bounds politically, socially and economically. Malaysia may not have achieved Vision 2020, but the next decade would surely be a litmus test for the country to prove its detractors wrong.”

ABOUT THE STUDY
The findings are from a nationally representative survey, conducted among n=1,000 Malaysians from 1 – 30 September 2019. The survey covered both peninsular and East Malaysia, and all key demographic groups.

ABOUT IPSOS WORLD AFFAIRS STUDY
These are the findings of the Global Advisor Wave 131, an Ipsos survey conducted between August 23 - September6, 2019.

For the results of the survey presented herein, an international sample of 18,526 adults aged 18-74 in the U.S., South Africa, New Zealand, Turkey and Canada, and age 16-74 in all other countries, were interviewed.Approximately 1000+ individuals participated on a country by country basis via the Ipsos Online Panel with the exception of Argentina, Belgium, Chile, Colombia,Hungary, Malaysia, Mexico, Netherlands, Peru, Poland, Russia, Saudi Arabia, South Africa, South Korea, Sweden and Turkey, where each have a sample approximately 500+. The precision of Ipsos online polls are calculated using a credibility interval with a poll of 1,000 accurate to +/- 3.1 percentage points and of 500 accurate to +/- 4.5 percentage points. For more information on the Ipsos use of credibility intervals, please visit the Ipsos website.