Links to 2021 recent study updates in Malaysia on Cyberbullying:-

Globally, 17% say their child has experienced cyberbullying. This number is on the rise, namely in South Africa (up from 10% in 2011 to 25% now) and Turkey (up from 5% in 2011 to 19% now.) The United States has also seen a significant uptick in parents reporting their child has been cyberbullied, up to 27% this year from 15% in 2011. The prevalence is relatively high in Malaysia as well, where about 1 in 4 parents (23%) say that their own child has experienced cyberbullying. 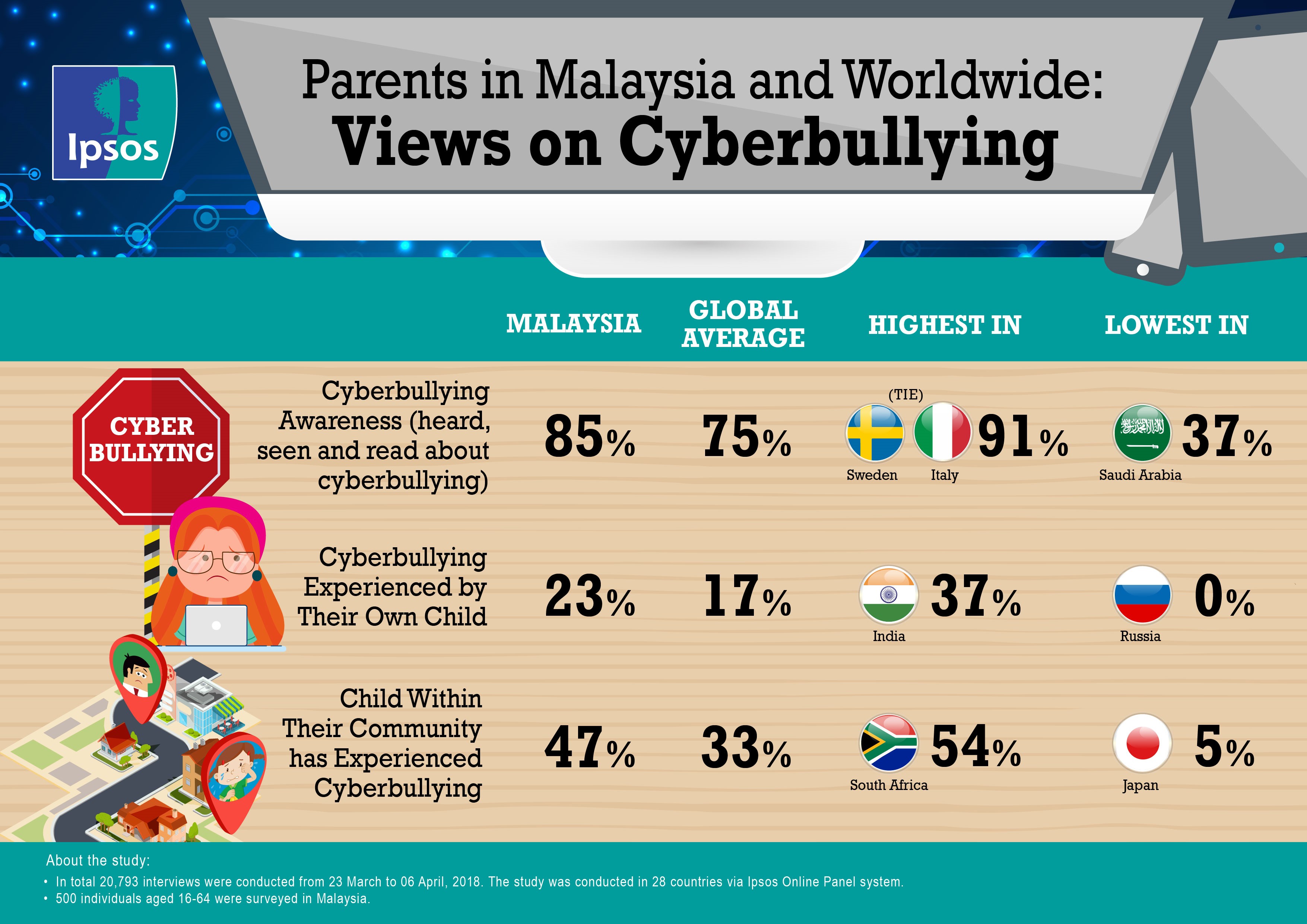 71% of Malaysian parents whose child has experienced cyberbullying or know of a child in their community who had been cyberbullied, report the harassing behaviour takes place on social networking sites. This is significantly higher than the APAC average of 53%.

Across the board, 51% globally reported that the cyberbully is a classmate of the affected child. Malaysia is close to this global average at 53%. In North America, this number is the highest (65%), and in the Middle East/Africa (39%) it is the lowest. 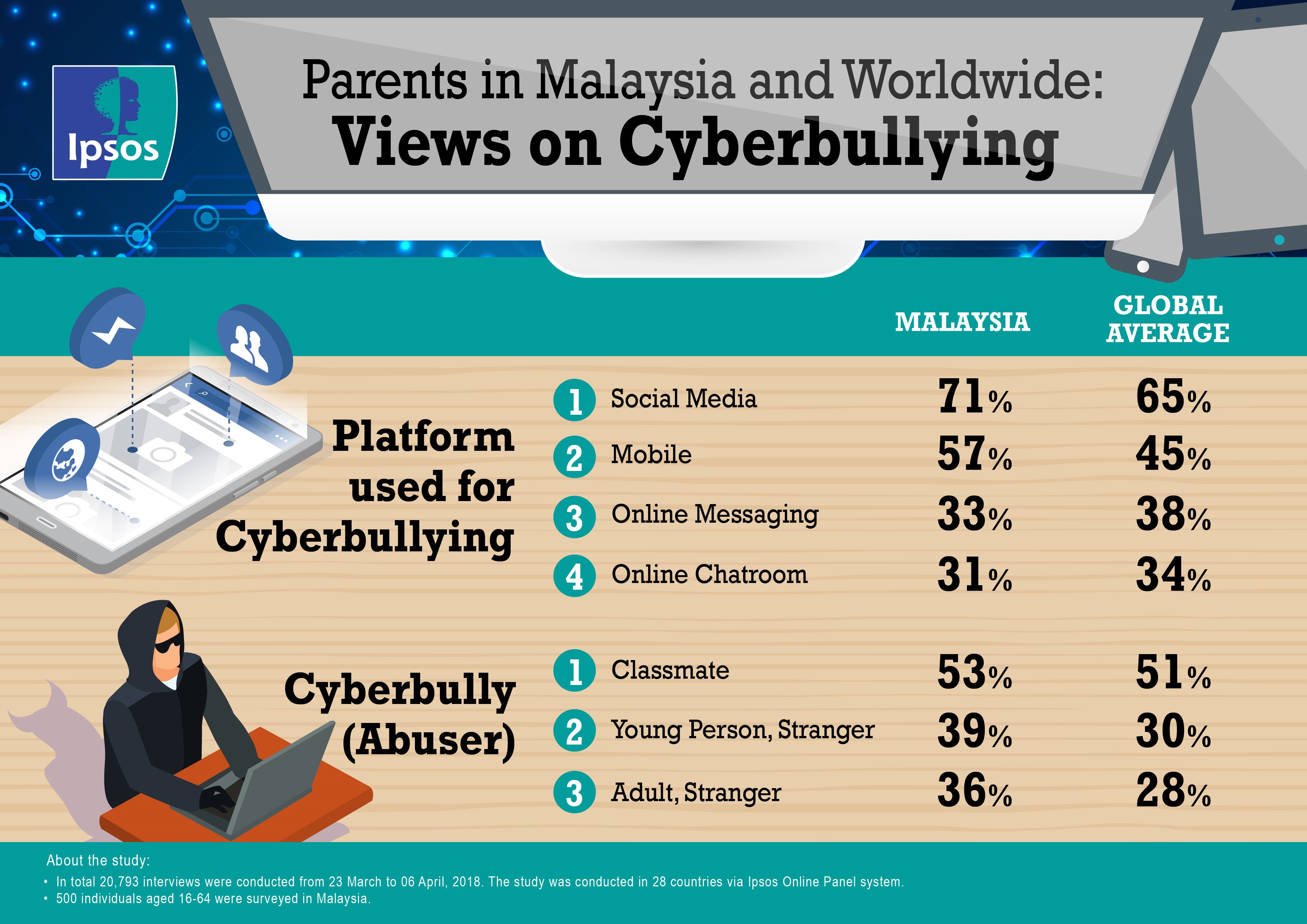 Globally, a majority of adults (76%) feel that cyberbullying is a fundamentally different type of bullying that needs special attention from parents and schools, in addition to existing efforts to address bullying in general. In Malaysia, a similar proportion of adultst (75%) feel the same way.

"For Digital Natives, Cyberbullying can be as real bullying in person. Our youth are growing up in a time where there is little distinction between digital and the physical. Their lives heavily intertwined with social media, and where texting is often the primary mode of communication among their peers. It is good that the awareness of cyberbullying is high is Malaysia, but it is important for parents to help their children recognize the abuse when it happens, and from a very young age. Needless to say, schools, pre-schools and the larger community too have a big part to play. It would be great to see more corporates like media and technology companies consuder supporting the cause through their products and marketing campaigns too." Comments Arun Menon, Managing Director, Ipsos in Malaysia.

These are the findings of a Global Advisor Cyberbullying Study. In total 20,793 interviews were conducted between March 23 – April 6, 2018 among adults aged 18-64 in the US and Canada, and adults aged 16-64 in all other countries. Where applicable, trended questions have been shown from Ipsos’ November 2011 and September 2016 cyberbullying studies.

Between 500 and 1000+ individuals participated on a country by country basis via the Ipsos Online Panel. The sample was 1000+ in Australia, Brazil, Canada, China, France, Germany, Great Britain, Italy, Japan, Mexico, Spain and the United Stated of America. In all other countries the sample was 500+. The precision of Ipsos online polls is calculated using a credibility interval with a poll of 1,000 accurate to +/- 3.5 percentage points and of 500 accurate to +/- 5.0 percentage points. For more information on Ipsos’ use of credibility intervals, please visit the Ipsos website.