In the last one decade, the news media landscape had witnessed a radical change. Gone are the days when one waited with bated breath for the morning newspaper or evening news on television/radio to get the daily quota of breaking news. But today, social media has become the main source of news supply for the world population anywhere, anytime!

Whatsapp, WeChat, Facebook, Twitter, YouTube, Instagram, Blogs, News Apps and other social media platforms have replaced traditional media with constant influx of content, with breaking stories on their feeds now grabbing instant eyeballs. However, breaking stories can be forgotten in an instant, as humans have limited attention span, unless they get turned around and shared. So sensational news breaking, proliferation of misinformation and spreading fake news and hoaxes on social media has been found to be the easiest way to create instant buzz and ensure audience engagement for a longer duration.

In the aftermath of a series of coordinated and and fatal terrorist attacks in Sri Lank on Easter Sunday in April, the government temporarily shut down all social media platforms in an attempt to halt the spread of false information and prevent further inflaming an already tense situation. And just last month, the Indian government shut down Internet services in the state of Kashmir after revoking Article 370 in the state. The intent of the governments in both instances of social media & Internet ban was to avoid propagation of unverified reports and unnecessary speculations, which could have created unwanted communal tensions and panic.

A month after the deadly Sri Lankan attacks, Ipsos Global Advisor conducted a survey of nearly 20,000 people across 27 countries to understand whether cutting off social media access during a crisis is acceptable to the general population at large. People around the world are divided on whether governments should shut down access to social media during a crisis, depending on if they see the platforms as valuable news sources, or a supplier of fake news. Six in ten global citizens (60%) opined tat it is acceptable to temporarily cut off access to social media platforms during times of crisis and if there was a terror attack to prevent the spread of misinformation. 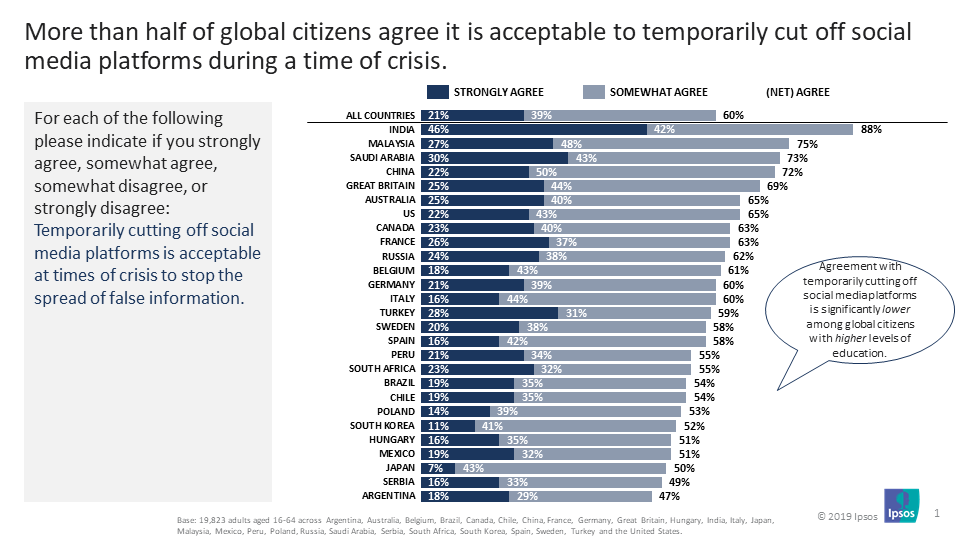 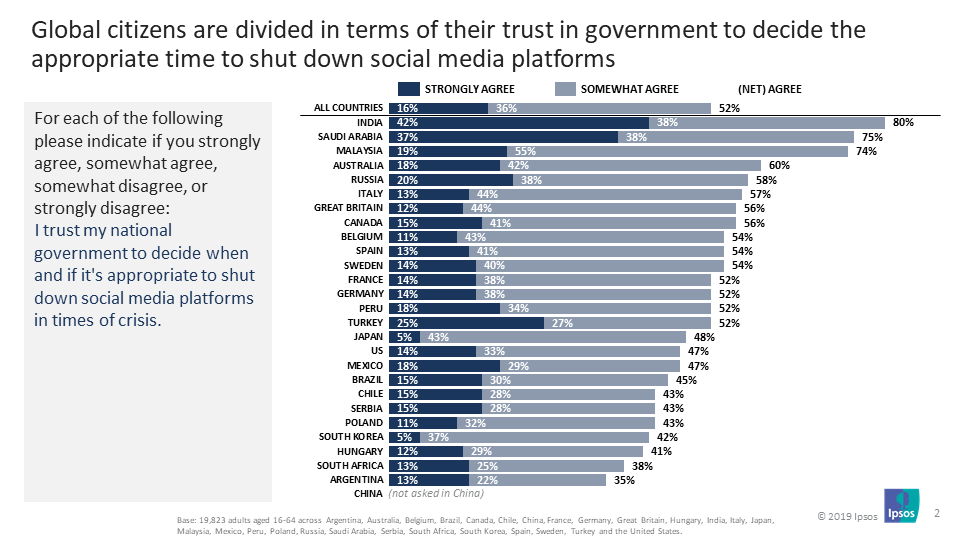 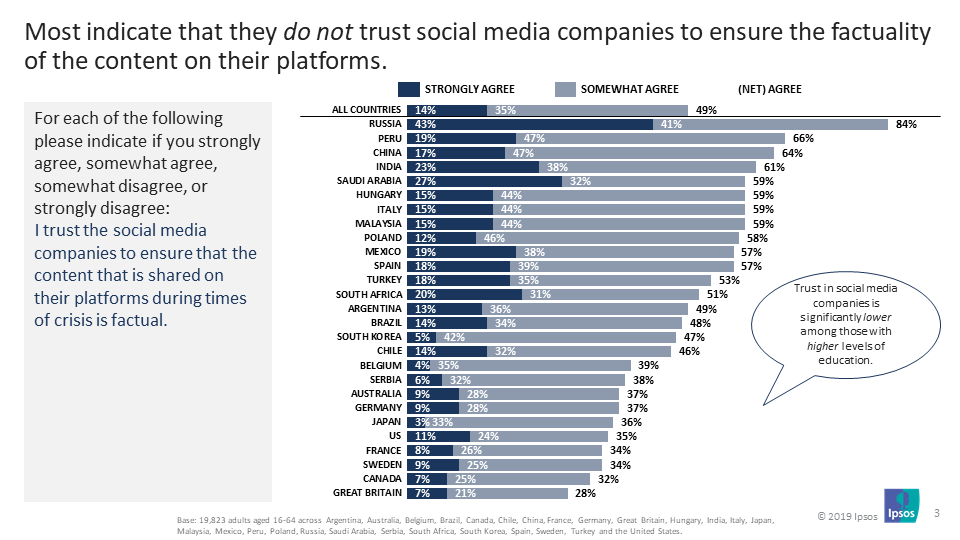 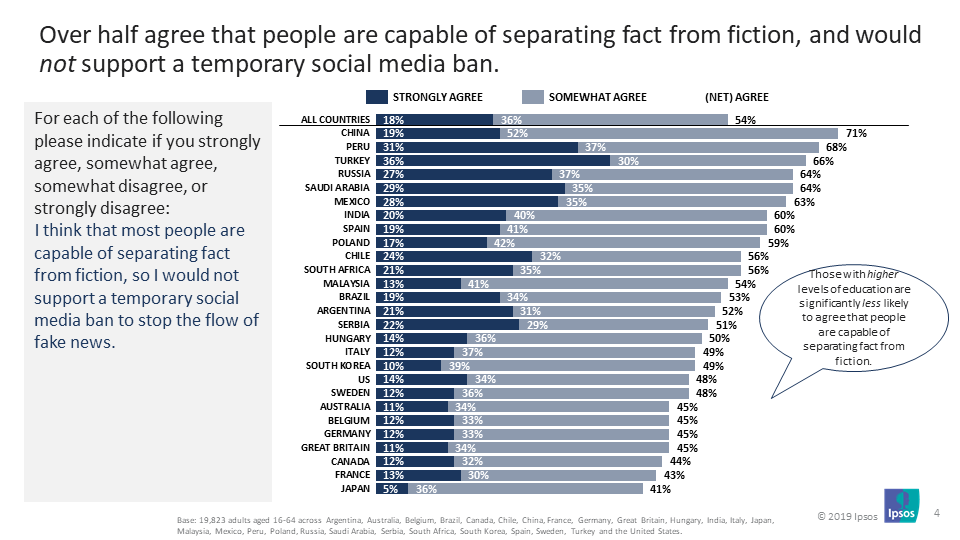 Comparable to the proportion of citizens who support social media bans, 62% of global citizens also agree that it is unacceptable to temporarily cut off social media during times of crisis, because these platforms are a primary source of news and information for many people. In fact over half of Malaysian (54%) agree that people are capable of separating fact from fiction, and would not support a temporary social media ban to stop dissemination of fake news. 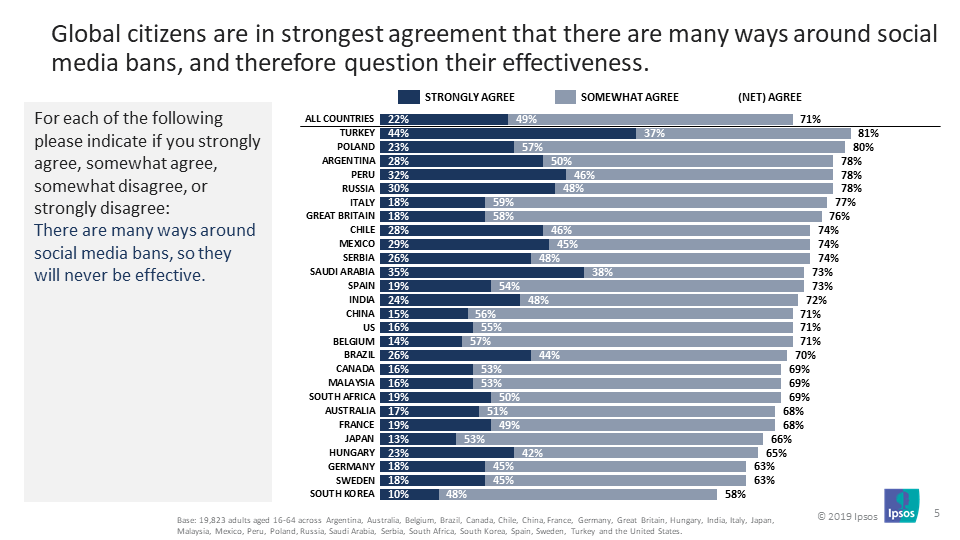 "Today's world is heavily reliant on social media for news and information. Social media has played a big role in the rise of fake news and spreading rumours. Lack of accountability and absence of thorough measures by social media companies to weed out fake content will prompt the public to trust governments to step in with regulations".

These are findings of the Global Advisor Wave 128, an Ipsos survey conducted between May 24th and June 7th, 2019. The survey instrument is conducted monthly in 27 countries around the world via the Ipsos Online Panel system. The countries reporting herein are Argentina, Australia, Belgium, Brazil, Canada, Chile, France, Great Britain, Germany, Hungary, India, Italy, Japan, Malaysia, Mexico, Peru, Poland, Russia, Serbia, South Africa, South Korea, Spain, Sweden, Turkey and the United States of America. For the results of the survey presented herein, an international sample  of 19,823 adults aged 18-74 in the US, South Africa Turkey and Canada, and aged 16-74 in all other countries, were interviewed.

Approximately 1000+ individuals participated on a country by country basis via the Ipsos Online Panel. The precision of Ipsos online polls are calculated using a credibility interval with a poll of 1,000 accurate to +/- 3.1 percentage points and of 500 accurate to +/- 4.5 percentage points.For more information on the Ipsos use of credibility intervals, please visit the Ipsos website. 15 out of the 27 countries surveyed online generate nationally representative samples in their countries (Argentina, Australia, Belgium, Canada, France, Great Britain, Germany, Hungary, Italy, Japan, Poland, South Korea, Spain, Sweden, and the United States of America)

Brazil, Chile, India, Malaysia, Mexico, Peru, Russia, Serbia, South Africa and Turkey produce a national sample that is more urban & educated, and with higher incomes than their fellow citizens. We refer to these respondents as "Upper Deck Consumer Citizens".

They are not nationally representative of their country. Where results do not sum to 100, this may be due to computer rounding, multiple responses or the exclusion of don't knows or not stated responses.