At 48.5, February 2020’s Ipsos Global Consumer Confidence Index, measuring consumer sentiment across 24 world markets, is nearly unchanged from its level of last month (48.7) and three months ago (48.6). However, since the outbreak of the COVID-19 virus was first reported in January, China’s consumer confidence, as measured by its National Index, has fallen by 4.3 points. That is the steepest decline observed over the past month across all 24 markets measured. At 65.3, China’s National Index is at its lowest level in three years.

Nevertheless, China remains the market with the highest level of consumer sentiment even though Saudi Arabia (64.6) and the United States (62.9) are now very close. At the opposite end of the spectrum, Turkey is the country surveyed with the lowest National Index score (34.9), followed by Russia (37.7) and South Africa (38.8).

While it appears to have been stable in aggregate at the global level, consumer sentiment has increased notably in several countries while dropping significantly in other markets. Between last November and February, significant upticks have been recorded in the National Index of Argentina (+4.1), Great Britain (+3.3), the United States (+1.9) and Spain (+1.5). During the same three-month period, in addition to China (-3.7), three countries have experienced comparable dips: Poland (-4.6), Hungary (-4.4), and Israel (-3.1).

The Expectations Index, indicative of the personal financial, local economic, and employment outlook, shows even more pronounced changes over the past three months in a positive direction for Great Britain (+5.0) and the United States (+3.3) and in a negative direction for China: (-5.0). 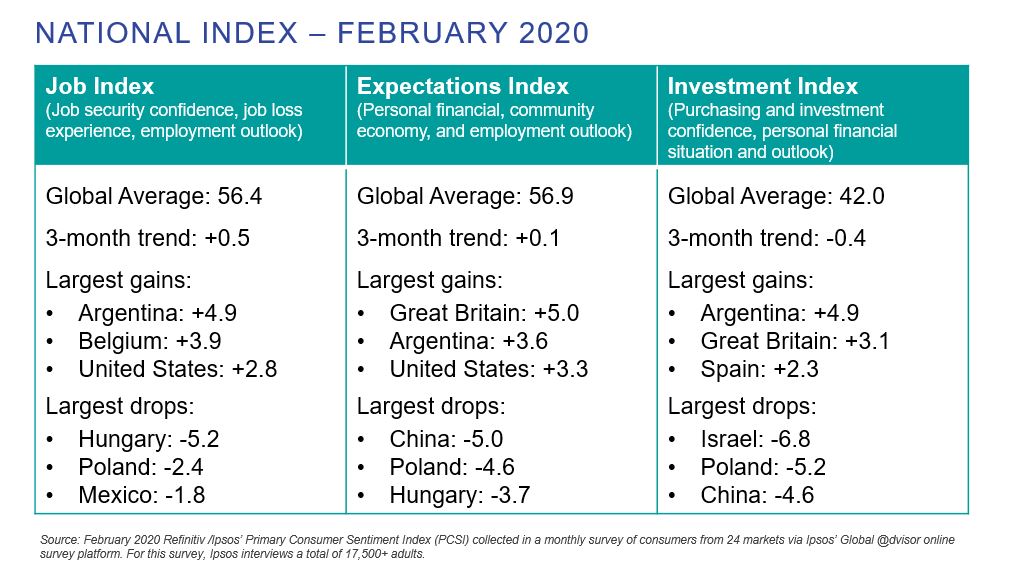 Visit our interactive portal, Ipsos Consolidated Economic Indicators (IpsosGlobalIndicators.com) for graphic comparisons and trended data pertaining to the Ipsos Global Consumer Confidence Index and sub-indices -- and all the questions on which they are based.