Less than half the Australian population (44%) are familiar with the metaverse, while only 36% express positive feelings about engaging with extended reality in daily life, a new global survey conducted by Ipsos for the World Economic Forum finds. Globally, about half of adults across 29 countries say they are familiar with the metaverse (52%) and 50% have positive feelings about engaging with it.

Ipsos Australia Director, David Elliott, said: "The findings from this latest Global survey show that Australia is well behind a lot of countries around the globe in terms of our familiarity with extended reality and our feelings towards it. What we know from other research is that a familiarity improves so to does the potential for trust and positivity. As we hear more about these technologies and learn more about them, it is likely we will become more positive about them and their potential to hopefully have a real impact on our lives."

Globally, the survey points to wide differences in familiarity and favourability toward these new technologies across countries and demographic groups.

Excitement about extended reality is significantly higher in emerging countries than it is in most high-income countries. In China, India, Peru, Saudi Arabia, and Colombia, more than two-thirds say they have positive feelings about the possibility of engaging with it. However, it is the case of fewer than one-third in Japan, Great Britain, Belgium, Canada, France, and Germany. 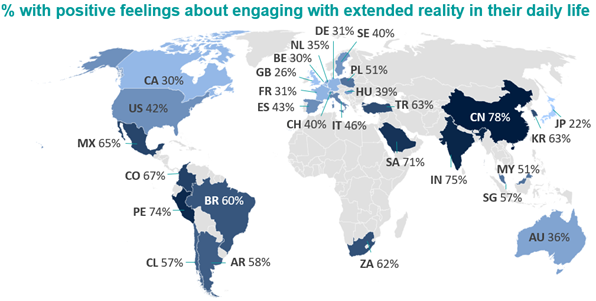 Levels of familiarity with virtual reality, augmented reality, and the metaverse show a similar pattern. More than two-thirds in Turkey, India, China, and South Korea report being at least somewhat familiar with the metaverse, compared to fewer than one-third in Poland, France, Belgium, Germany, and the Netherlands. 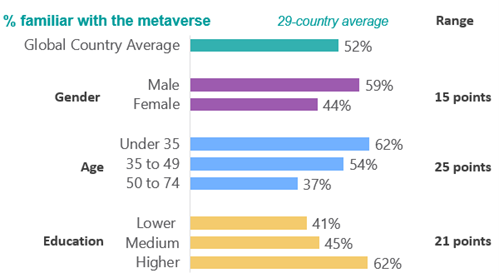 Despite significant differences in familiarity and enthusiasm, the global public widely expects that various types of metaverse apps using XR will significantly change people’s lives over the next decade – most of all virtual learning (for a 29-country average of 66%), digital entertainment in virtual reality, and virtual work settings.

Expectations about the impact of metaverse apps also vary by country and by demographic characteristics, following the same pattern as favourability toward extended reality. However, differences are not as sharp, suggesting that, whether they look forward to it or not, most people expect their lives to be profoundly impacted by the new technologies in the coming years.

The samples in Argentina, Australia, Belgium, Canada, France, Germany, Great Britain, Hungary, Italy, Japan, the Netherlands, Poland, South Korea, Spain, Sweden, Switzerland, and the United States can be taken as representative of these countries’ general adult population under the age of 75.

The samples in Brazil, Chile, China, Colombia, India, Malaysia, Mexico, Peru, Saudi Arabia, Singapore, South Africa, and Turkey are more urban, more educated, and/or more affluent than the general population. The survey results for these markets should be viewed as reflecting the views of the more “connected” segment of their population. The data is weighted so that each country’s sample composition best reflects the demographic profile of the adult population according to the most recent census data.

Where results do not sum to 100 or the ‘difference’ appears to be +/-1 more/less than the actual, this may be due to rounding, multiple responses, or the exclusion of don't knows or not stated responses.

As a foundation member of the Australian Polling Council Ipsos complies with the Council’s Code of Conduct. The purpose of the Code is to provide journalists and the public with greater confidence and trust in publicly released polling and survey data. We strongly encourage the inclusion of methodological details in any reference to published Ipsos results. The Long Methodology Disclosure Statement for the study will be available at https://www.ipsos.com/en-au/disclosure_statements within two business days.