A new study by Ipsos across 27 countries in collaboration with International Women's Day, highlights the level of concern people around the world have about a number of equality issues.

The top three issues facing women globally are sexual harassment, sexual violence and physical violence. Malaysians agree with the same issues, with the exception of 'sexualisation of women and girls in the media', which is the third most important equality issue faced by women. Balancing work and caring responsibilities and gender stereotyping are more pressing issues for Malaysians compared to the global audience.

Support for pregnant women/new mothers and the lack of women in leadership roles are prevalent in Malaysia, as these issues are in the top 10 equality issues faced by women in the country. 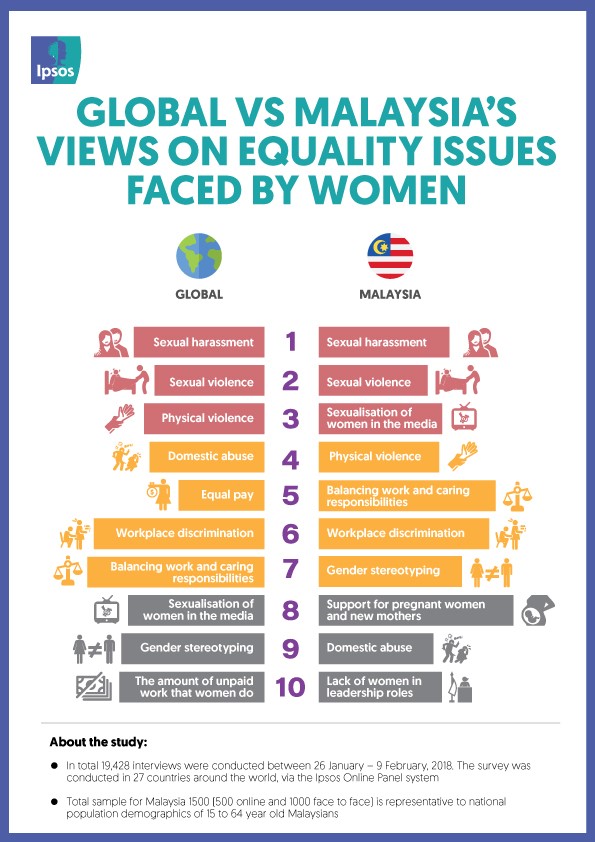 Sexual harassment is seen as the top issue facing women...

Three in ten people (32%) globally believe that sexual harassment is the biggest equality issue facing women and girls in the country - the top answer picked out from a long list of equality issues. Malaysians share the same belief, and more than half of them (51%) believe this is the number one issues for women in the country.

...but people underestimate its prevalence and half still think that reports of sexual harassment are ignored

Even with these high levels of concern about sexual harassment, people underestimate just how common an occurrence this is in each country where we asked this question. For example, 68% of women in Britain say they have experienced sexual harassment at some point - but the average guess by survey participants is that 55% have.

In contrast, people overestimate women's experience of physical or sexual violence from partners or former partners. Overall, across all countries, the average guess is that 41% of women have experienced this, when the actual proportion of women that say this has happened to them is 25%.

A considerable share of Malaysians (44%) shift the responsibility to women; that sexual harassment would end if the women simply told the man to stop, while in India it is 57%.

However, there is strong support for a zero tolerance policy on sexual harassment; three quarters (78%) of Malaysians feel that this is essential to bring about change in society, which matches the global figures.

People are wildly over-optimistic about the pace of change on pay and economic equality...

Nearly half of people globally (47%) think that equality between men and women will be achieved in their lifetime, which does not match current estimates by the World Economic Forum, which estimates that this will not be achieved for another 217 years at the current rate of progress. The average guess across countries is that it will be achieved in 35 years, with a large number of countries, including Malaysians, thinking it will be 20 years or less.

...and we hugely overestimate women's representation in business leadership

Misperceptions about reaching equality may be influenced by the fact that we think that aspects of women's lives are better than they actually are. In particular, we hugely overestimate the extent to which women are represented in business leadership; we estimate that, of the world's top 500 companies, one in five (19%) has a female CEO - when the actual figure is just 3%.

Even so, the majority view around the world is that women need to be better represented; six in ten people (61%) globally agree that things would work better if more women held positions with responsiblities in government and companies. In Malaysia, 55% agree with this too. Though this is an option held more by Malaysian women (65%) than Malaysian men (45%).

Most support achieving equality but close to half think things have gone far enough when it comes to giving women equal rights...

Katharine Davis, Managing Director of Ipsos in Malaysia, comments, "More and more people now understand the equality issues and the empowerment of women and girls is not just a goal in itself, but a key to sustainable development, economic growth, and peace and security. The study revealed that there is a sense of complacency that we've already come far enough, and it is important for Malaysians to be aware that there is still a long way to go. Where women are fully represented, societies are more peaceful and stable. Standing up for women's rights and development is standing up for the global good."