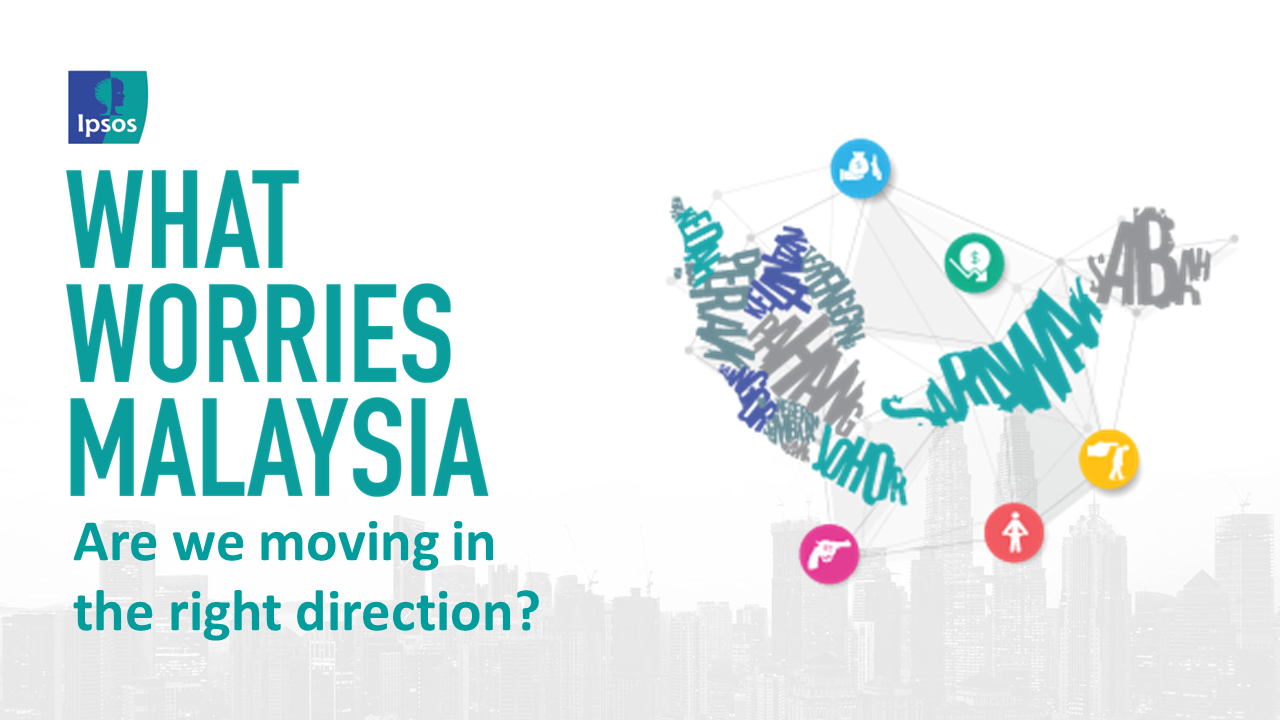 The Malaysian public’s excitement following the election of the new government have subsided after a year, but Malaysians still remain positive on the country’s direction under the current government leadership. Looking at the key concerns, Malaysians expect the government to come up with more measures to address the perception of crime & violence in the country and significantly lessen the financial burden to improve the quality of the life for its citizens.

Corruption was the biggest concern for Malaysians pre & post GE14, 1 year after the new ruling government has been in power, main worries has shifted to Crime and Violence (39%) followed by Inflation and Cost of Living (34%).

As positivity gradually adjusts to everyday reality, more than half of Malaysians (57%) remain confident and believe the country is moving in the right direction, compared to three quarters of the population (75%) immediately after GE14.  At the current rate, perception of wrong direction is gaining momentum and Malaysia is getting closer to the global average.

Pre GE14, the educated and youth was the one that was primarily concerned about where the country is heading. A paradigm shift to positive sentiment emerged across all demographic segments immediately post GE14. An year on, youth and lower income segments are becoming more concerned about the national direction.

Malaysian perception on the strength of current and future local economy, has reached a full circle.  One year from GE 14, Malaysians are less confident to make any major purchase (House, Car, etc).

Confidence levels of the Mar-Apr 19 period are significantly similar to that right before GE14. Confidence in the local economy has eroded primarily among young, urban, middle and lower income households.

Crime and Violence (39%).  Though it has moved up in ranking, % of those concerned remain stagnant. Despite actual statistics, relentless news coverages and reports are contributing to the public perception of this concern. The coverage of abuse, bullying, street crime, racial & sexual discrimination on top of reported crime like burglary & murder are the key topics of discussion among Malaysians on social media.

Inflation/Cost of Living (34%) has risen to become the second biggest concern for Malaysians today. At individual and family level, financial concerns and how to sustain a way of life is becoming more rampant in daily conversations.

Corruption (32%) still remains to be a major worry amongst Malaysian even though it has now dropped significantly to the third biggest concern compared to it being a big concern of almost half of Malaysian last year (47%).

Poverty (31%) and Unemployment and Jobs (28%) remains as key concern for the Malaysian public similar to last year.

Previously it ranked as the top concern of Malaysians living in the Central region and Non-Bumiputeras in particular, it has currently dropped the 4th main concern. Significant measures from the government to address this should have contributed to the change in rank.

Malaysians with a high household income of RM5,000 and above are also less worried with the issue of corruption as the ranking has fallen to 3rd place this year.

Inflation has become the biggest worry for Urban Malaysians. Youth (between 18 and 24 years old) and the low household income earners (below RM3,000) are most affected, where inflation and cost of living is ranked 3rd and 2nd respectively, as opposed to 5th place last year. Fresh graduates, young Malaysians starting their careers/families are the few groups that needs government attention.

What worries the World

The Ipsos What Worries the World study finds the majority of people across the participating 28 nations feel their country is on the wrong track (58% on average), with South Africa (77%), France (77%), Spain (76%), Turkey (74%) and Belgium (74%) recording the greatest levels of apprehension.

The study finds that most people across the 28 countries surveyed say that their country is on the wrong track (58% on average). There are, however, wide-ranging disparities in scores across the globe:

The four major worries for global citizens are: