After 100 days with a new government, two-thirds of Malaysia is confident that the country is on the right track. The Malaysian public is expecting a sustained crackdown on financial and political corruption, and a greater focus on alleviating unemployment and improving the quality of Malaysian jobs.

The results of the Malaysian General Elections 2018 had Malaysian citizens feeling upbeat and hopeful for their country and the economy. The first 100 days were critical for the new government, Pakatan Harapan to deliver on several of their promises. Even as the positivity adjusted to the everyday realities, the majority of Malaysians (66%) remain as confident, agreeing that the country is heading in the right direction. 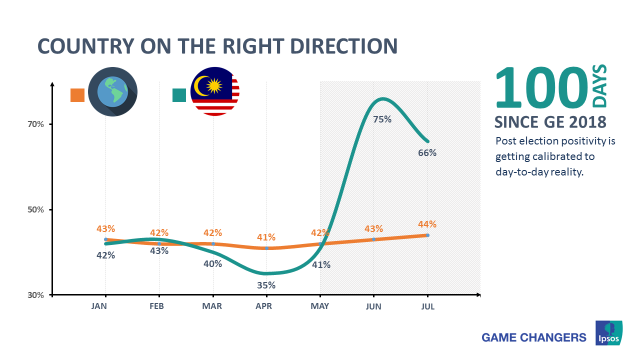 Malaysia showed 34 percentage points increase between May and June. This is the highest jump ever recorded post any national elections in 2018. In July, Malaysian optimism is still high (66%), but has caliberated down by 9 points from June.

In this 2018 follow-up study on "What Worries Malaysia", Ipsos asked Malaysians what their top concerns were among a series of current issues. The study tracked sentiments of Malaysians before GE 2018, immediately after GE 2018 and 100 days on.

The study revealed that the new government's efforts in abolishing the GST and reducing the cost of living, have helped to alleviate Malaysians' worry about Taxes and Inflation. However, Financial/Political Corruption persists as the top worry for 60% of Malaysians followed by Unemployment & Jobs (43%) and Crime & Violence (41%). 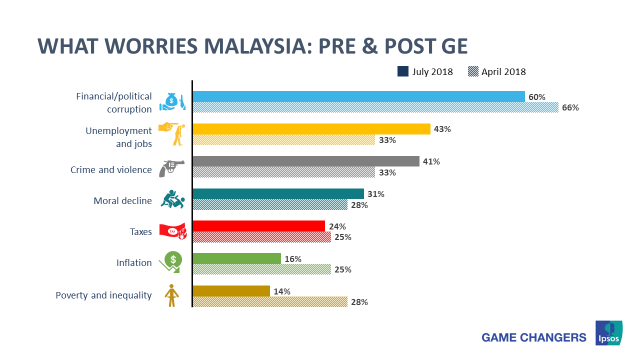 Commenting on the findings, Arun Menon, Managing Director of Ipsos in Malaysia, said:

"As expected, countries that have gone through change of governments, tend to record a higher sentiment. But what we have seen for Malaysia is ground-breaking. High positive sentiment translates to a resurgent confidence among Malaysians that they are capable to draw their own future.

For the new PH government, this offers a challenge as they face an all-time high expectation from the public. Further, there is a need for better accountability and scrutiny of their actions.

Calibration of sentiment is natural, and it shows that the government is heading in the right direction. The sentiment is supported by the government measures taken to clamp down on corruption and taxes. After the first 100 days, we should expect to see the focus shift to day-to-day realities like jobs and security."

What Worries the World

Running in parallel to "What Worries Malaysia", was the global study "What Worries the World" conducted across 27 other participating countries.

Unlike Malaysia, the study finds that on average, global citizens feel that their country is on the wrong track (56%). With Brazil (85%), Peru (78%), South Africa (76%) and Hungary (74%) citing the greatest levels of concern. 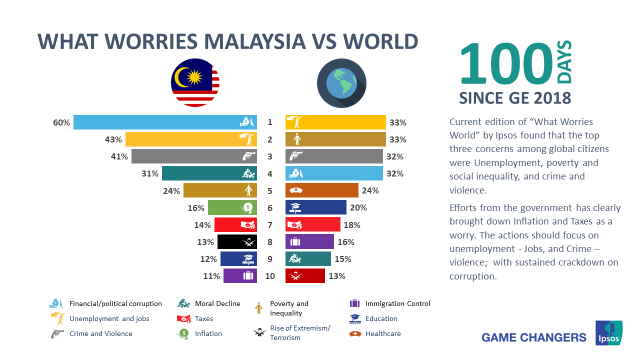 To discover the other findings of the study, download the PDF version of the release.