In just one film (2 hours 12 minutes to be exact), the internationally acclaimed “Parasite” movie conjured and reflected the reality of economic hopes and tragedies. Coming from a single-parent family and growing up with my grandparents, I found myself laughing and deep in thought as my sister and I too scoured our flat like ‘parasites’ for free wifi (I still remember the wifi network name ‘linksys’), going to friends’ houses to stay and of course, using our imagination as a form of escape for a more stable and better life.

The use of ‘scholars rock’ in the movie adds an extra layer to the story, initially I felt it was a metaphorical symbol of social mobility but at the end it carried this somber tone like it was a cursed object. There was also clever usage of stairs to indicate the higher class and sublevel apartment indicating the differences. In my country, the little red dot called Singapore, we have our own version to distinguish class differences – we jokingly say that there are the kids who own Smiggles stationary, and those who are able to afford fish at our ‘cai fan’ stalls (ubiquitous canteen-style food stalls), though there is some truth to it.

I still remember previously the Singapore society has the well-known ideal of 5Cs (Cash, Car, Credit Card, Condominium and Country Club membership). However, in recent times, increasing awareness of the gap, social mobility and shift in focus to personal ideals allowed the 5Cs goal to fade out.

“The promise of equality is often described as a promise of mobility. That is, national leaders emphasize that they are focused on delivering opportunities for upward movement, for improvement: we cannot say the outcome will be equal, but we can promise that everyone will get to fairly play the game.”
Teo You Yenn, This is What Inequality Looks Like

How does Singapore fare on Social Mobility? 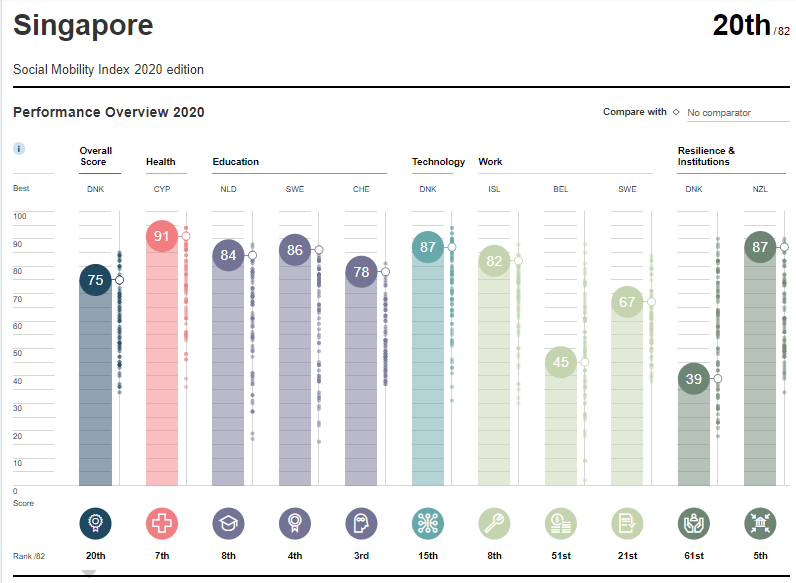 In a recent study that Ipsos conducted for the World Economic Forum (part of the 2020 Social Mobility Index), Singapore is ranked 20th among 82 countries in terms of social mobility. As a country, we excel in health (7th), education access (8th), education quality (4th) and lifelong learning (3rd) as well as technology (15th) dimensions that aids social mobility – though we under-perform in 2 critical areas: 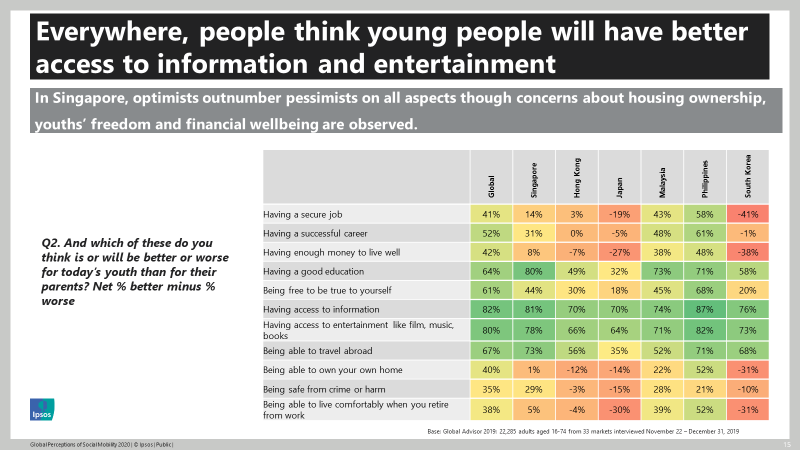 Given where we are today, I ponder upon 3 essential concerns that continues to underlie the complex nature of social mobility (raised by Associate Professor Walter Theseira, School of SUSS):

In a freshly independent Singapore context, economic growth was dubbed as a “rising tide that lifted all boats” helping to generate wealth across all levels of society. Yet, with gloomy global economy that is expected to slow and weaken (both abroad and at home), social mobility or the lack of it will come into sharper focus. Even when speaking to some of my friends, they have expressed wariness in today’s economy and are concerned about securing a job after graduation especially with the COVID-19 pandemic amid other cues of slowing growth.

The culture of ‘face’ and social perception towards marriage partners continue to push forth the notion of marrying a ‘good match’ – which most often than not we see a power couple together likely from the same income or education class pairing. Being of the age where I’ve started to receive wedding invites from close friends, that is indeed true for majority of the couples I’ve come across. Not that it is wrong to seek someone who is ‘on par’ with the other, but looking at the bigger picture, it paints a self-reinforcing loop with serious economic costs in the long-term. Links between positive assortative marriages and social mobility could also be looked at via the lens of having potential gaps in income, gaps in parenting, gaps in opportunity (for instance). This is not only an issue in Singapore, but globally.

While Singapore’s narrative has been built on the idea of an open meritocracy that everyone has a fair opportunity to move up the social ladder, the notion of personal responsibility hence implies that social mobility is created through individual decisions to study, invest and work on oneself – but how much of it is really true? While the system has worked for many, we cannot ignore those that function with the psychological burden of scarcity without the buffer of wealth are at an disadvantage. This has been explored in the realms of education where we compare an individual from a well-to-do background with the availability of private tuitions and family safety nets as oppose to another who must work and study to make ends meet – sometimes while living with their foster families.

What kind of Singapore do I want to live in?

We have constantly been in a long-term struggle to enable more parity between social classes and I applaud the nation’s commitment to doing so with the progressive wage model and heavily subsidised rental flats for low income families (just to name a few). Despite best efforts to mitigate this, I have had my fair share of scepticism where concerns that increasing such generosity will breed dependence and generate undue costs in the long-term which took time to unlearn from my level of privilege and dialogue with my peers.

From the standpoint of a millennial in Singapore, I strongly yearn to lead a meaningful life with strong social bonds, to hold myself to higher standards in my pursuit for career and learning amid future uncertainty. I would want to live in a Singapore that holds true to its commitment that “no one is left behind”.

Referencing back to the Parasite movie, rather than stepping on each other to climb out of the semi-basement apartment and fighting for life-and-death with Moon Gwang and her husband in the underground bunker; I would like for the Park family (who owns the house) to acknowledge and genuinely help the other families towards their ladder of success. Unlike the term “every man for himself”, I’m hoping that the society will progress together and help each other on our way forward.

Being an idealist, I still wonder if there are any models or area of thought that can allow us to not forsake social mobility in our fight for progress.