A majority of people in 26 countries say the overall cost of food, goods and services have increased for them and their families since the coronavirus outbreak commenced, according to a global survey by Ipsos.

Three in five people (60%) in an online poll of nearly 18,000 people conducted from May 22 to June 5 say costs have increased somewhat or a lot, with those in Argentina, South Africa and Mexico (81%), Turkey (80%) and Chile and Belgium (79%) are at the top of the list of countries experiencing increases.

In South Africa, women are more worried about this issue than men, with 84% of women and 77% of men saying that the overall cost of necessities have increased over the last few months. When looking at the different age groups, older people are more keenly feeling these cost increases, with 87% of those 50 years and older, 83% of those 35 - 49 years old and 76% of those 18 - 34 years old saying that costs have increased a lot or somewhat.

The global results show that more than a quarter of people in Hungary (27%) and South Korea (26%) say costs have decreased somewhat or a lot since the outbreak began, followed by Japan and Russia (21%). Meanwhile, almost three in every ten in all countries (29%) say costs have stayed the same, with a majority agreeing with this in Sweden (53%), where restrictive lockdown measures were not implemented. Almost half of people in the Netherlands and Japan (49%) and South Korea (48%) also agree with those in the Scandinavian country. 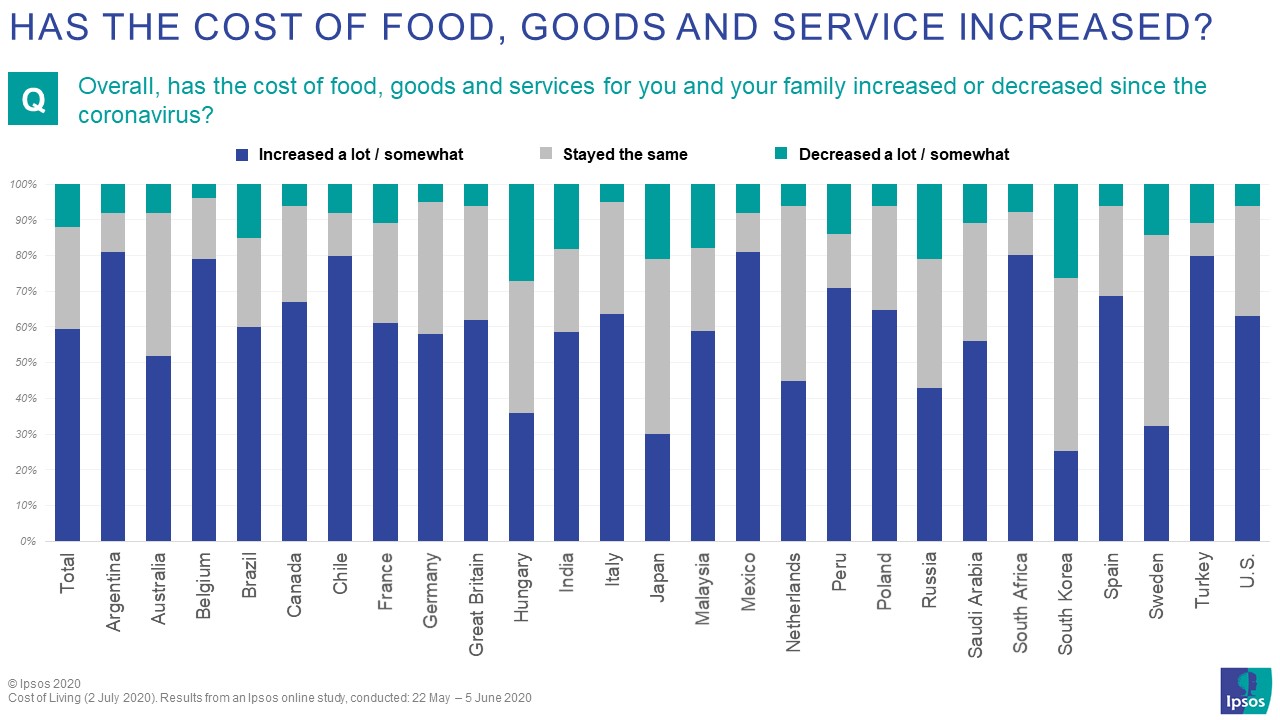 By region, people in Latin America (75%) are most likely to say costs have increased, followed by those in the Middle East and Africa (72%).

More than six in every ten online citizens globally (63%) said the cost of food, groceries and household supplies increased since the Covid-19 outbreak began – highlighting the only majority average out of the 11 cost categories presented. This sentiment is highest in emerging markets of Argentina and Turkey (86%), Chile, Mexico and South Africa (80%).

Utility bills, which include items like water, electricity, refuse removal, phone / television / internet services, is the second biggest cost people said increased (39%). Those in Turkey (74%), Chile (68%), and Malaysia (65%) are most likely to cite this.

Other costs that have been identified as having increased is for personal care and body products, and services (28%), followed by healthcare (27%), and entertainment (25%) products and services. 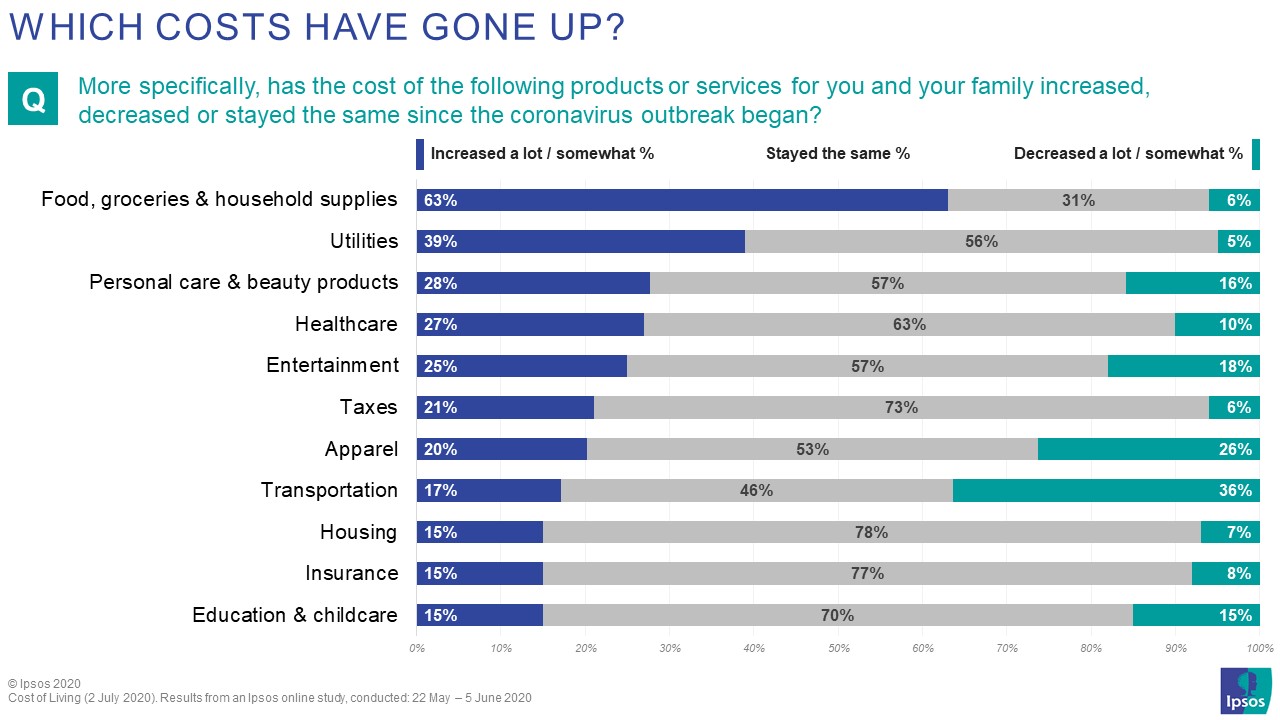 In terms of where costs remain unchanged, more than three quarters (78%) said housing costs such as rent and mortgage payments stayed the same, followed by insurance at 77% and taxes at 73%. Another major expenditure where 70% of people said they are not paying more, or less is education and childcare.

While costs have either increased or stayed the same, there are some areas where a significant portion of people say costs have decreased. More than a third (36%) said transportation such as using vehicles, buses, trains and fuel costs have decreased – likely a result of less travel as restrictions forced people to work from home. A majority of people in Turkey (56%) cited this, followed by Malaysia (52%), Great Britain (51%) and Canada (50%).

The opinions of online South Africans about cost increases per item are summarised as: 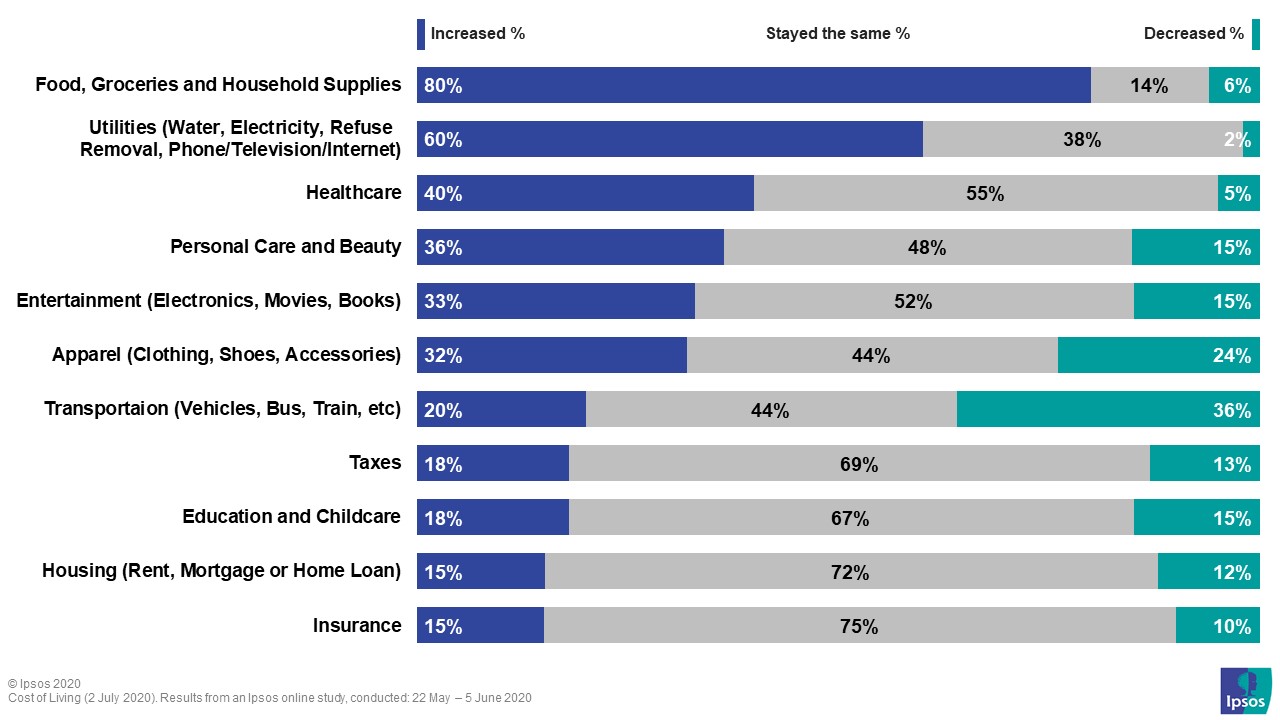 In terms of why people think costs increased for them – half (50%) said it is because they had to purchase more expensive items or pay delivery charges, due to store closures and a shortage of supplies since Covid-19. But at the same time, an equal proportion of people globally disagree. 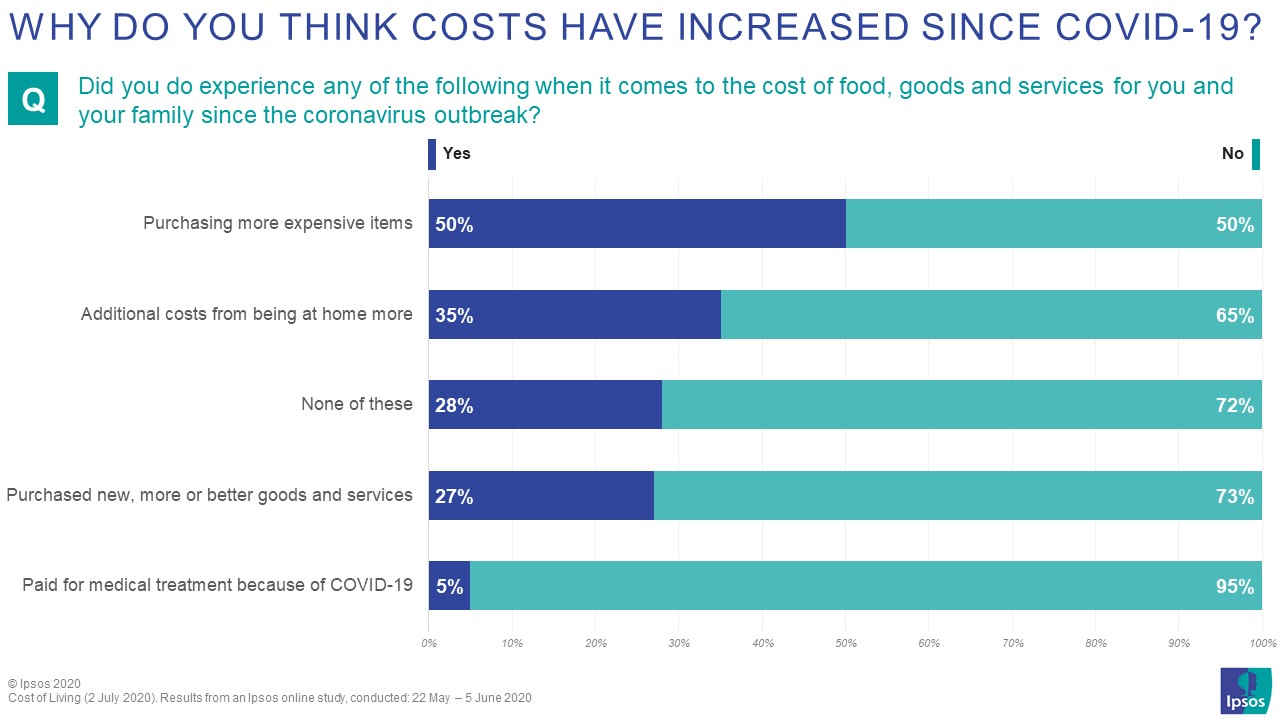 This sentiment is highest in South America, with respondents in Peru (78%), Chile (72%) and Argentina (68%) agreeing. Those in Asian countries of South Korea (91%) and Japan (83%) are most likely to say this was not the case for them, followed by respondents in Sweden (77%) and the Netherlands (73%). 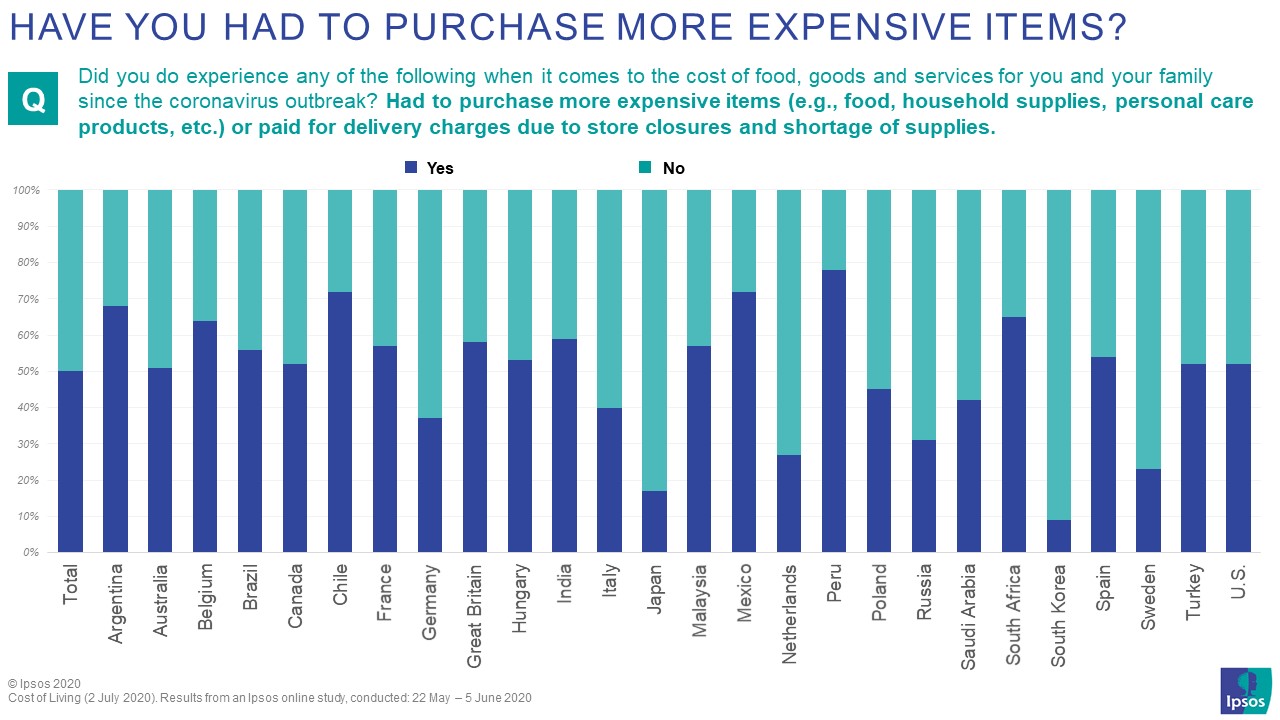 Meanwhile, more than a third (35%) of people said they incurred new or additional costs such as larger utility bills due to spending more time at home or working from home, with respondents in Turkey (65%) and Malaysia (63%) in most agreement. People in European countries, including the Netherlands (84%), Sweden and France (83%), and Belgium (80%) are most likely to disagree.

In terms of spending more to cope with effects of isolation, more than a quarter globally (27%) said they purchased new, more, or better goods and services for relief from lockdowns and social distancing. This sentiment is highest in Peru (45%), Turkey (37%), Chile (35%), Argentina (34%), Saudi Arabia and Canada (32%). People in Europe were most likely to disagree, with Hungary (89%), Germany (86%) and Russia (82%) at the top.

One in every ten (11%) of online South Africans indicated that they had to pay for medical treatment because of Covid-19, while 89% did not have this expense (It is not clear whether this payment was for them personally or for a member of their family, a friend, or another person). Globally, most people (95%) also said they didn’t have medical expenses related to Covid-19.