After a very challenging year in 2020 and a pandemic that has potentially impacted our lives and habits forever, 2021 provided a much needed rebound, especially when it comes to advertising expenditure in our region.

The overall situation continues to differ greatly from one country to the next. While most countries in the Levant are struggling, the GCC is flourishing. Economies in countries such as Saudi Arabia, the UAE and Egypt are growing, and this has been reflected in advertising expenditure. For countries such as Lebanon, which has, and is, suffering hugely from an economic and political crisis, the ADEX has dropped dramatically.

My personal analysis is based on an estimation of real advertising expenditure in the region, which I was able to build using different sources and my own personal knowledge and know-how. If we followed advertising expenditure based on official rate card figures, the numbers would be much higher than they are, especially for traditional media. This is a longstanding problem. Although we have raised our voice for many years in an attempt to solve this issue, nothing has changed. Both media owners and media agencies have a tendency to inflate their numbers, which are far higher than reality. Although this is a discussion for another day, it’s an issue that I hope can be solved. Because the solution cannot come from a measurement company like Ipsos. It must come from the media players themselves. By adopting a fully transparent rate card – one that limits the discount levels offered to clients – the difference between an official rate card and reality can be reduced to an accepted minimum. Hopefully one day this issue can be resolved.

Many people will argue over the numbers in this report – and many others will agree. What I do know is that the majority will say the numbers are much lower in reality. Every year I receive the same comments. This is, I believe, because a culture of negativity reigns. People do not like to say they are doing well or they are making money. I even think these numbers might be slightly conservative. 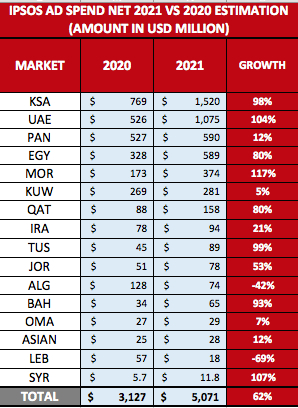 In general, online advertising grew by 84 per cent, while offline grew by 47 per cent compared with 2020. Online’s share of total advertising expenditure in 2021 was 47 per cent. Digital advertising is now the clear leader, with close to half of all advertising expenditure in our region spent on digital. Most advertisers and agencies have shifted their budgets to online, especially as online is a one-to-one media and is far more affordable for small businesses compared with other mass offline media. Big tech companies take between 70 and 80 per cent of total spend, leaving the remaining 20 per cent for thousands of local publishers to live from. TV comes in second with 24.5 per cent market share; OOH remains very healthy in our region with a share of 19.5 per cent; newspapers lost a lot of ground with 5.5 per cent of total media expenditure; and cinema and magazines have half a percentage point each.

In terms of growth, digital grew by 82 per cent from $1.29 billion in 2020 to $2.37 billion in 2021. Because of the way digital advertising is served, estimating digital spend is a very difficult task, not only in our region but globally.

While we have our own automated system to collect ads from different types, the Interactive Advertising Bureau (IAB) in the GCC took a different approach and asked agencies to manually fill in an excel sheet. This shows how difficult it is to estimate digital expenditure. However, our system is based on passively and automatically collecting the highest number of ads from thousands of websites and social media platforms with the least human intervention. This growth in digital spend is mainly being driven by a handful of countries, namely Saudi Arabia and the UAE.

TV comes in second with $1.24 billion, growing by 14 per cent from $1.09 billion in 2020. Television is under huge pressure from digital and is losing ground to it. This pressure is set to continue. The two main markets where TV still reigns are pan-Arab and Egypt.

In third place and with huge potential in most countries because it hasn’t been negatively impacted by digital, is OOH. On the contrary, a lot of OOH is utilizing digital technology and some people are even talking about programmatic OOH – something that I’m personally not a big believer in. This media grew by 176 per cent from $358 million in 2020 to $986 million in 2021. OOH is always underestimated and is still not adequately measured in our region. That’s why it is a top priority for Ipsos this year and moving forward. The biggest countries for OOH are Saudi Arabia and the UAE, although it is sizeable in smaller countries such as Morocco, Iraq and Egypt.

Newspapers grew by 21 per cent from $232 million to $281 million in 2021. This medium used to be huge many years back, especially in the GCC, but has suffered a lot since then and was the first victim of digital. Although they are witnessing growth, cinema and magazines both remain very small in comparison, with $29 million and $27 million respectively.

In terms of countries, Saudi Arabia is first with $1.52 billion, driven mainly by digital and OOH (TV is mainly allocated under the pan-Arab market). Local advertisers are spending heavily and a lot of Saudi brands feature in the ranking of top spending brands, especially now that the focus is on promoting Saudi tourism. 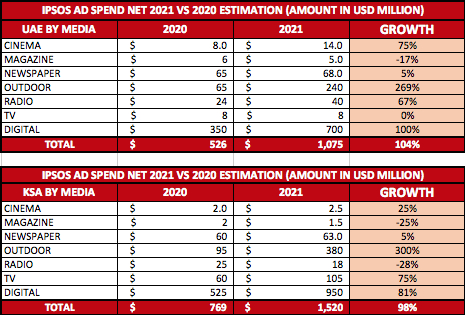 The UAE comes in second with $1.07 billion, mainly driven by digital and OOH. Expo 2020 was among the top advertisers boosting spend in 2021.

In fourth is Egypt. It is the only market where TV grew by a big percentage (close to 40 per cent of growth).

Morocco (another large market with big potential) saw growth of 117 per cent, driven mainly by TV and digital, and comes in fifth with $374 million.

Kuwait is placed sixth with $281 million; Qatar is seventh with $158 million; Iraq is eighth with $94 million. These are followed by Tunisia in ninth place with $89 million and Jordan in 10th with $78 million. Then there is Algeria, Bahrain, Oman, pan-Asia, Lebanon and Syria. 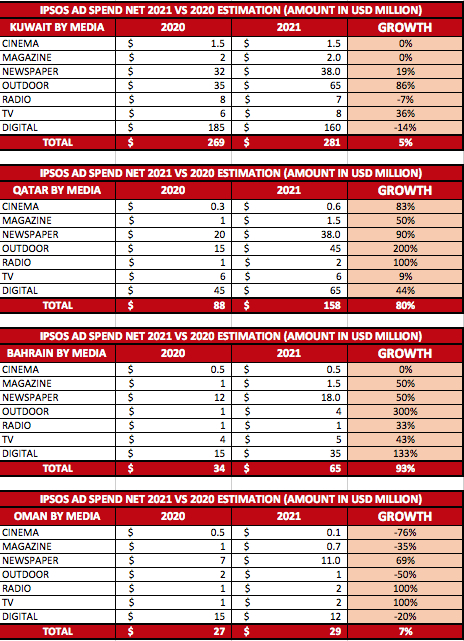 Of course, Lebanon’s advertising spend has dropped dramatically with the economic crisis and the devaluation of the lira. Historically, Lebanon used to always occupy one of the top spots. 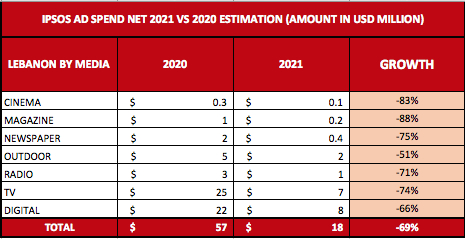 Looking at the numbers by category, real estate is placed first, with a lot of projects taking place in many countries and investors turning to the MENA region. Telecommunications, confectionery, banking, and e-commerce (a growing category) complete the top five. These are followed by pharmaceutical products, washing detergents, exhibitions and events, hair care and diapers. 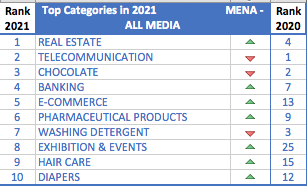 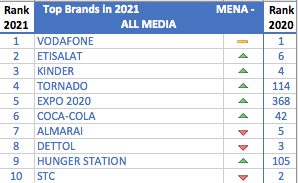 Finally, I will leave it to you to read the following tables. These tables and rankings are the fruit of continuous labour and we have collected the information using the latest technology.

For their hard work and dedication, I thank the team at Ipsos, without whom none of this would be possible.