A survey conducted by Ipsos over the days when DORSCON (Disease Outbreak Response System Condition) alert level in Singapore was raised to Orange, revealed that Singaporeans remain confident in the Government and the country’s ability to contain and manage the COVID-19 outbreak. The survey was conducted over the period of 5th to 9th Feb 2020 among a nationally representative sample of 1000 Singaporeans.

With the DORSCON alert level raised to Orange, 91% of Singaporeans say they had started taking maximum precaution in keeping themselves safe from contracting the Coronavirus. This was an increase from 86% of Singaporeans in the days just before the change in DORSCON.

While 74% of Singaporeans agreed that their income would be affected if the COVID-19 situation does not improve in the next 6 months, Singaporeans said they are confident that the Singapore Government would implement suitable measures to successfully guide the country through an economic downturn brought about by the virus. This confidence increased from 79% before DORSCON Orange to 84% after the announcement.

In that survey, 8 in 10 Singaporeans predicted that this would turn into a worldwide health pandemic, but they also trusted that Singapore is well equipped to contain and manage the COVID-19 outbreak. This confidence had also increased from 77% to 82% before and after DORSCON was raised to Orange. Furthermore, there was greater confidence in the country’s ability to combat the outbreak than when Singapore was fighting the SARS virus in 2002/2003 (73%).

Tan Hui-Ching, Director of Public Affairs at Ipsos in Singapore said, “Despite the several accounts of panic behaviour we have seen, the survey clearly finds Singaporeans hopeful and are placing their trust in the Singapore Government. This is validation of the Government’s strategy in maintaining constant communication with Singaporeans.” 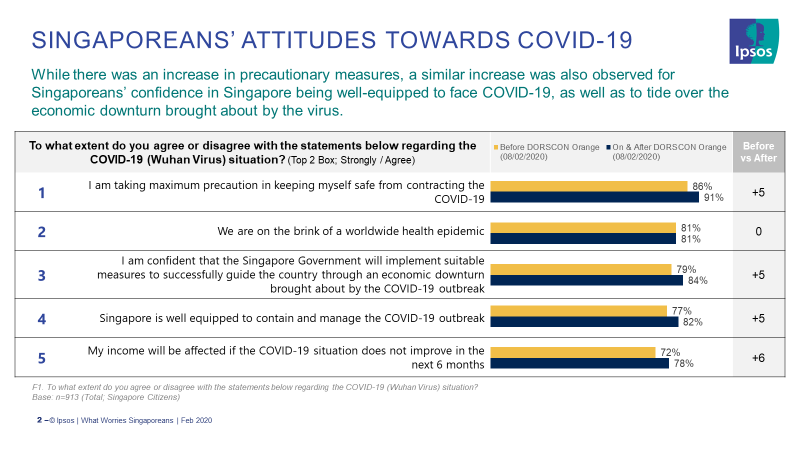 Since the outbreak of COVID-19 in Singapore, Social media has been awash with chatter. Analysis conducted by the Social Intelligence Analytics unit at Ipsos over the period of 1st Feb to 9 am on 13th Mar 2020, saw more than 63,000 social media posts on the topic in Singapore alone.  A deeper analysis on 500 of these comments posted on social media sites and forums in Singapore revealed a similar picture to the survey conducted earlier.

Majority of these comments showed the camaraderie and vigilance of the Singapore people in this crisis. Singaporeans are trying to be part of the solution by proactively sharing helpful information (eg. Advice on practicing good hygiene) and reproving irresponsible behaviour.

Support for the steps taken by the Government was apparent too. Some applaud the measures that Singapore had taken especially in contrast with other countries who had not reacted as quickly; and ministers were commended for their show of solidarity towards healthcare workers and others working on the frontline.

Negative sentiments were seen around confusion or conflicting information received over the use of masks only if one is sick. Some also question the credibility of the number of reported cases in Singapore when other countries such as S.Korea and the USA are reporting much higher numbers.

After Prime Minister Lee Hsien Loong addressed the nation in a live telecast at 8pm on 12th March, social media saw strong positive reactions to the PM’s speech. There is trust in the government’s game plan to tide over this difficult time, there is belief in SG United and they are feeling reassured that the Government is thinking ahead.

Payal Maheshwari, Director of Social Intelligence Analytics at Ipsos, said, “Naturally, Singaporeans will talk about their worries under such fearful circumstances. But they are closely watching the situation and are wary of fake news. Some try to keep a sense of humour too. What was very clear was that Singaporeans are taking it seriously. They are trying to be part of the solution and are taking the lead from the country’s leaders.”

This study did not have any external sponsors or partners. It was initiated and run by Ipsos with the intention to share our understanding about the world we live in and how citizens think and feel about their world.