Despite this confidence, Singaporeans are relatively inaccurate in identifying 'fake news'. When shown a series of ten headlines from digital channels and asked to indicate which ones were 'fake news', four in ten (43%) correctly identified two or fewer 'fake news' headlines out of five. 91% incorrectly identified one or more as being real. There is no correlation between people's confidence in their ability to detect fake news and their actual ability.

Personal opinion and its bearing on identification of 'Fake News'

When asked to what extent they agreed with the statement "If I disagree with a news story, it is likely fake", more than one quarter (28%) agreed. Singaporeans with lower levels of education attainment - Secondary School or lower - were significantly more likely to agree with this statement (35%).

Furthermore, more than four in ten (43%) of all Singaporeans indicate that they trust news that they agree with. This belief is more commonplace among males (47%), and less common among those aged 35-44 (35%).

Singaporeans derive their news from a wide variety of media. Online sites (including social media) are the primary sources of information for many Singaporeans; Facebook is the most commonly accessed (60%), followed by social media generally (53%) and newspapers' websites (52%). In addition, more than 4 in 10 (44%) indicated that they consumed news shared with them via WhatsApp in the month preceding the survey.

Fewer indicated that they get their news from traditional media sources such as broadcast/cable TV news (38%), news radio (30%), and talk radio (14%). 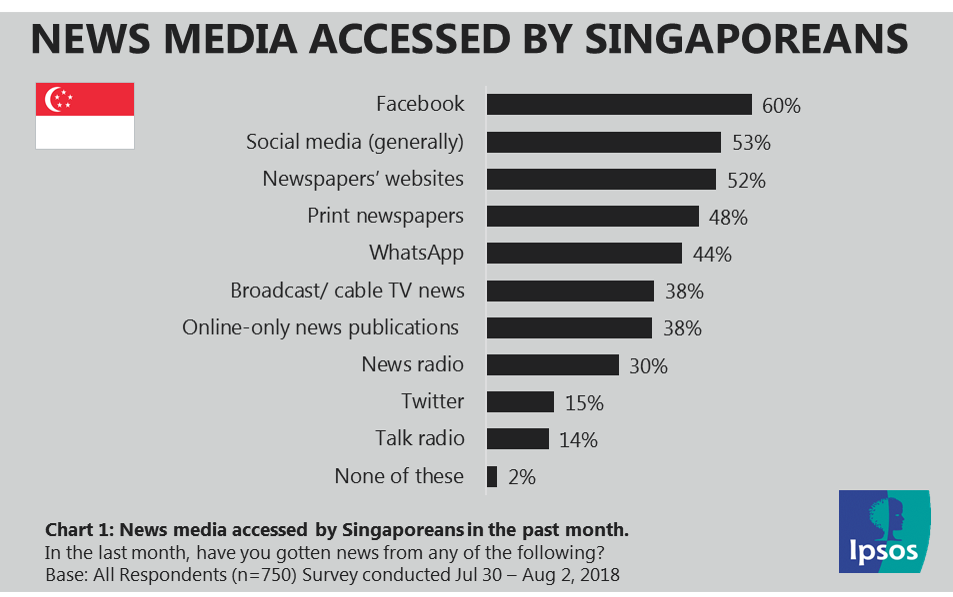 Trust and confidence in news sources

The extent to which Singaporeans trust the news the access via traditional and non-traditional channels differs according to their demographic profile. Males are significantly more likely to trust digital channels, including: online-only news publications and social media (34%); Twitter (30%); and WhatsApp (29%). On the other hand, older Singaporeans - those aged 45-65 - trust traditional sources more, including print and news radio.

Singaporeans are relatively reliant upon social media as a source of information. However, the extent to which they trust news stories accessed on social media is contingent upon who shares it.

While majority of Singaporeans value veracity of the news above all else (77%), 14% place greater weight on the news's ability to evoke certain emotions in them, while a smaller group 99%) appreciate contents' alignment with their personal opinions.

Robert McPhedran, Associate Research Director, Ipsos in Singapore said: "This research corroborates the Government's strong concern with respect to fake news. Despite their high levels of confidence, all Singaporeans - irrespective of educational attainment and media consumption habits - find it difficult to discern between real and fake news. Given the proliferation of digital media in Singapore and the dire consequence of 'fake news' globally, this is indeed a serious social issue."

Technical notes about the study: