While people around the world recognise that there are positives to getting old, including having more time to spend with friends and family (36%), more time for hobbies and leisure (32%), more time for holidays and travel (26%) and giving up work (26%) they also identify a number of downsides. Globally, three in ten worry about not having enough to live on (30%) with a quarter worrying about losing mobility (26%) and losing memory (24%).

Despite this, a majority of us worldwide expect to be fit and healthy in old age (57%), and this is even higher in South Africa at 64%. There is considerable variation between the countries surveyed. Nine in ten of those in Colombia, Argentina, China, Peru and Malaysia (89%, 88%, 88%, 86% and 85%respectively) agree with this sentiment. In comparison, those least likely to agree are those in South Korea (17%), France (20%), Japan (23%) and Belgium (24%).

Taken together though, this results in high levels of concern about later life. Globally, half (52%) of us worry about old age with people in Brazil and China (72% in both countries) most likely to agree with this. Those in South Korea are least concerned; only one in six (16%) agree that they worry about old age. Online South Africans are slightly less concerned than global average, with 46% saying they are worried about old age. 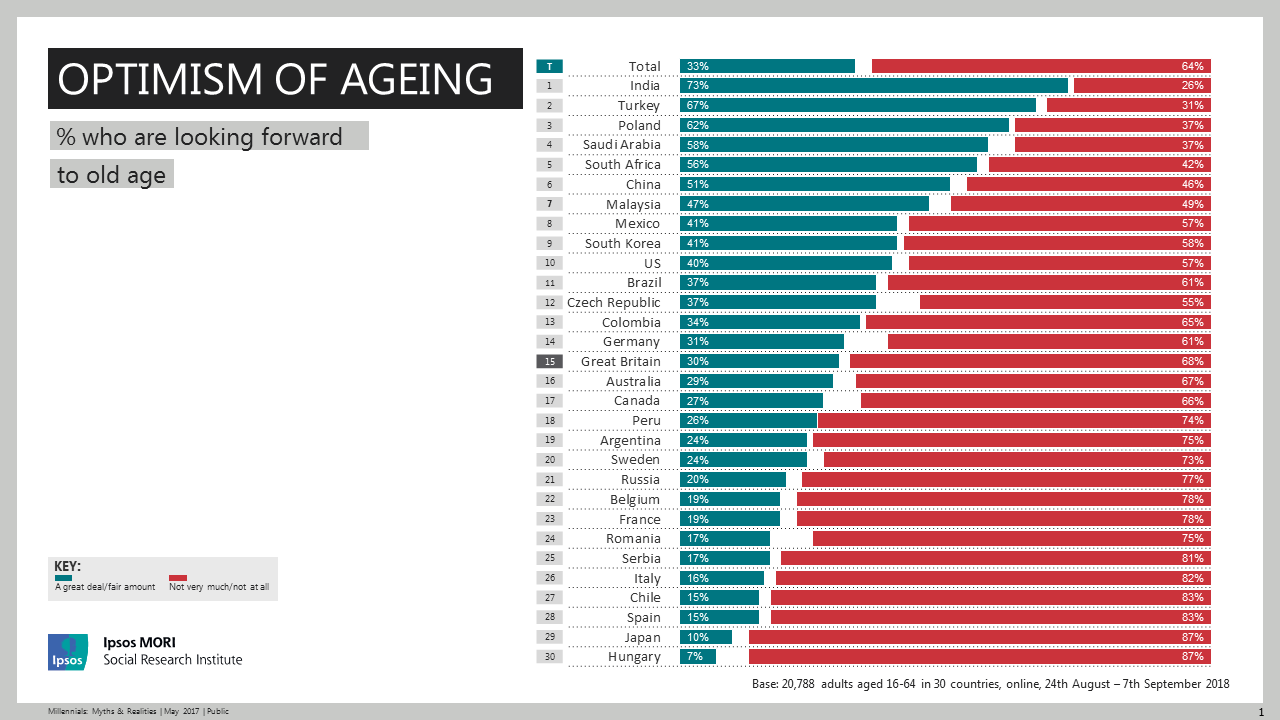 When is old age, and what does it mean?

Mari Harris, Senior Client Director at Ipsos comments “The growth of the ageing population is one of our greatest achievements. However, it also presents society, business and brands with significant challenges as well. Our research shows that, globally, there is a great deal of negativity towards later life, with financial and health concerns prevalent. Feeding into this negativity is a sense that the media does not do enough to portray later life as a time of potential. It is therefore, perhaps, little surprise that when describing those in old age people commonly reach for terms like ‘frail’, ‘lonely’ and ‘unfairly treated’ along with ‘wise’. There are reasons for optimism, however.”

Representation in the media

The potential for technology

Harris continued that “More people globally have faith in the power of technology to improve the lives of the elderly. People also tend to think that there are things that they can do to ensure they are prepared for old age – though there is a gap between what we know we should be doing, and what we are doing in practice. Later life should be our golden years – but there is clearly much work to be done for this time in our life to be seen as such”.