Anxiety, overeating and under-exercising, insomnia and depression are all seen as problems arising as a result of the Covid-19 pandemic and lockdown in South Africa.

Only three in every ten online South Africans (30%) indicated that they do not suffer from any of the listed conditions. Males were slightly less open to answering the question than females were.

“Are you suffering from any of the following as a result of Covid-19?”

*Please note: Respondents were not asked whether they have suffered from these conditions at some time before the pandemic.

With unlimited exercise hours commencing on the 1st of June, one can assume that less people will complain about insufficient exercise, but the Level 3 regulations will not make a difference to those suffering from anxiety, overeating, insomnia and depression.

Interpreting the table above, women clearly feel that they are suffering more from these conditions than men are.

South Africans are not alone in experiencing negative psychological effects from the coronavirus and lockdown.

In keeping with the ban on alcohol sales in South Africa during lockdown level 4, almost one in every five (19%) men indicated that they have consumed less alcohol, with females not far behind at 14% - and despite the ban on cigarette sales, 8% are smoking more than they did before the pandemic, probably adding weight to the reports about the easy accessibility of illicit cigarettes in the country.

More people across 16 countries say they feel that they are suffering from not exercising enough and anxiety. This is out of 11 possible ailments presented as a result of the coronavirus pandemic.

The second most cited health concern on the international list is anxiety, with at least a quarter of people in 11 countries saying they are suffering from this because of the pandemic. Respondents in Brazil (41%), Mexico (35%), Russia and South Africa (32%) and Canada (29%) are more likely to say this. 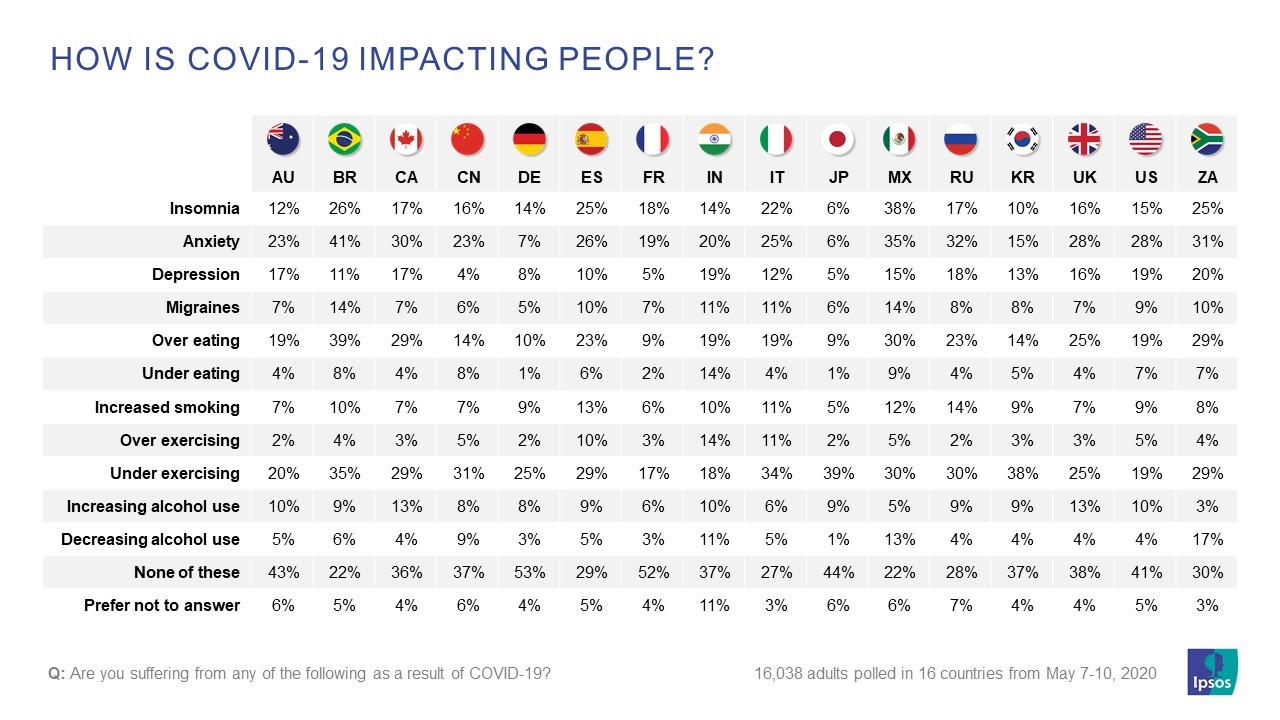 Stewart Shankman, Chief of Psychology at Northwestern University’s Feinberg School of Medicine in Chicago, USA, said the pandemic is fraught with uncertainty ̶ about how long it will last, who will catch it, etc., and uncertainty is one of the biggest precipitants of anxiety.

Overeating and insomnia were reported as the next two down the list of ailments that people are suffering from. Respondents in Brazil (39%) were most likely to say they are overeating, followed by South Africa and Mexico (29%), Canada (28%) and the United Kingdom (25%).

Dr William Schaffner, Professor of Preventive Medicine and Infectious Diseases at Vanderbilt University Medical Centre in Nashville, USA, said if you are home with food, and feeling sad and lonely from being isolated, there is a greater tendency to snack. 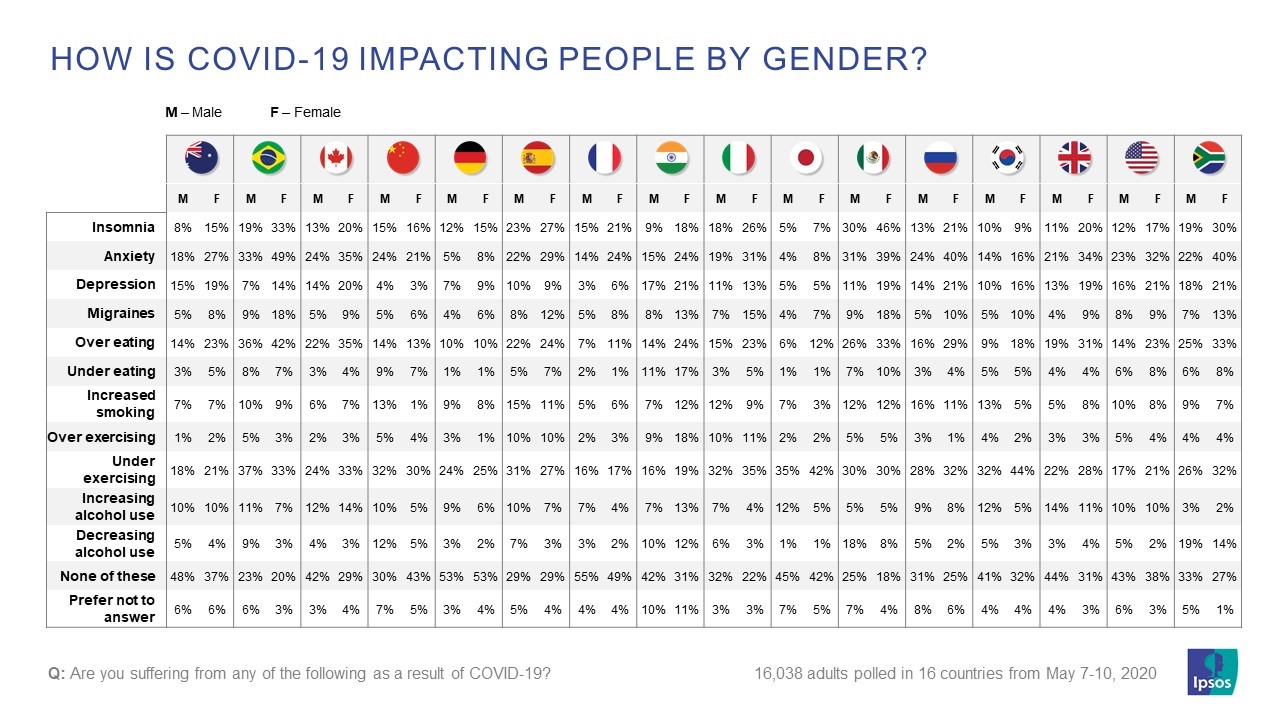 Meanwhile, women are more likely than men to say they are impacted in all the categories except for alcohol consumption and increased smoking. The percentage of younger women – those aged 34 and under – were also more likely to cite insomnia, anxiety and depression as result of the outbreak.

Overall though, more people across the 16 countries said they were not affected by any of these conditions because of the pandemic. This sentiment was true for the majority in Germany (53%) and France (52%), followed by Japan (44%), Australia (43%) and the United States (41%).

Prof. Shankman said these results highlight people’s resilience and something we’ve seen in response to numerous other natural disasters and traumas in the past. Still, Prof. Schaffer advises people to move around as much as they can while keeping a social distance.