Amid the Covid-19 crisis, South Africans – and many other citizens across the world – say that governments should not take their eyes off the issue of climate change. In an online study conducted from 21 February 2020 to 6 March 2020, respondents were asked: 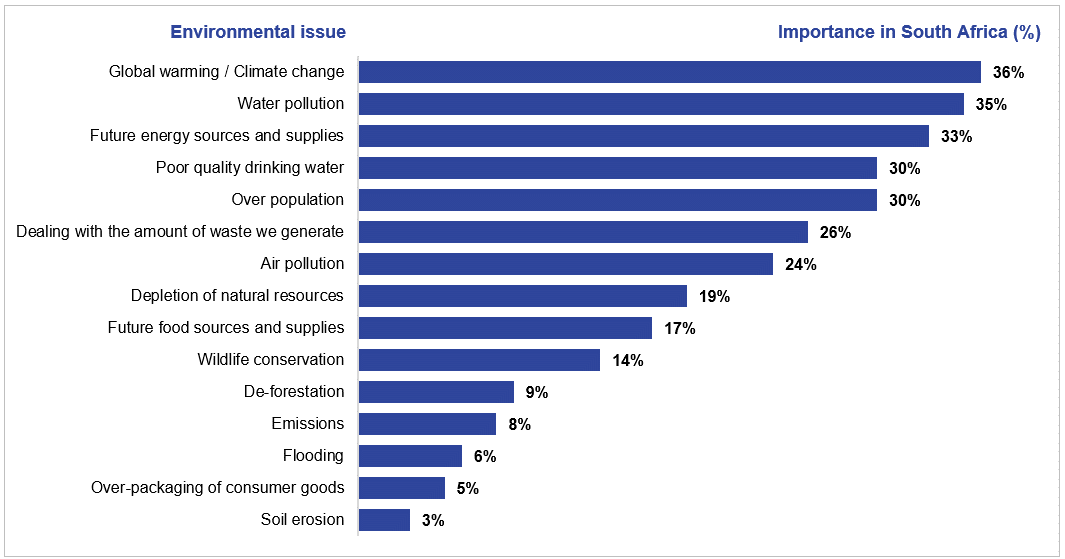 Apart from the issue of global warming and climate change, the South African response to this question reflects the environmental issues we have dealt with over the last few years of droughts and the Eskom / energy crisis. Combating water pollution, ensuring high water quality and the availability of future energy sources are mentioned by about a third of online South Africans. As the size of the population places stress on scarce resources, three in every ten also want leaders to give attention to this issue.

Worldwide, two-thirds agreed that government actions should prioritise climate change issues in the economic recovery planning for “the day after tomorrow”, after the Covid-19 crisis. A very high proportion ( 84%) of online South Africans agreed that “If South Africa’s government does not act now to combat climate change, it will be failing the people of South Africa.” (In this opinion, we are only second to Columbia at 87%).

In South Africa, voting behaviour is entrenched and voters seldom change the party they vote for in an election, but almost two-thirds (64%) agreed that “If a political party’s policies don’t deal seriously with climate change, this would put me off voting for them.” Although we should see this as a prompt for political parties to formulate viable environmental policies, it is important to keep in mind that this study was carried out online –covering almost two-thirds of the South African adult population. (Results are therefore not nationally representative .)

Mari Harris, Director and Political Analyst at Ipsos South Africa said: “It is interesting to note that the same proportion, namely 84%, of online South Africans expressed the belief in 2014 and again in 2020, that human activities contribute to climate change. And, although much more can be done to encourage citizens to change behaviour, to limit their influences, six in every ten online South Africans are saying that they are prepared to avoid buying products with a lot of packaging and are prepared to recycle materials such as glass, paper and plastic. Policymakers can definitely help entrench these positive climate behaviours, especially by enabling and encouraging South Africans to recycle on a much larger scale.”

These are the headlines of the South African findings; the rest of the press release looks at the worldwide findings in more detail.

A new Ipsos poll conducted in 14 countries finds 71% of adults globally agree that, in the long term, climate change is as serious a crisis as Covid-19 is. The survey shows widespread support for government actions to prioritise climate change in the economic recovery after Covid-19, with 65% globally agreeing that this is important. The survey was conducted online among more than 28,000 adults between 16 April 2020 and 19 April 2020. (It is important to note that South Africa did not form part of this specific 14-country survey.)

Another Ipsos survey, carried out online among more than 20,000 adults across 29 countries between 21 February 2020 and 6 March 2020, finds that while climate change remains the most important environmental issue for citizens globally, citizens are no more likely to say they plan to make changes to their own environmental behaviours than they were six years ago. (South Africa did form part of this study.)

The top global findings include:

Majority of citizens feel they are likely to make changes to their own behaviour to limit personal contribution to climate change. However, the proportion saying they are likely to make such changes has not increased since Ipsos last asked this question six years ago. Citizens remain more likely to plan on taking actions which are convenient and easier to achieve than they are to plan changes which are more far-reaching - such as avoiding flying or making changes to their diet.

Citizens are divided on how likely they are to undertake less comfortable and convenient lifestyle changes.

There has been very little change since 2014 in how likely the public are to say they plan to change their behaviours to limit their personal contribution to climate change, across the 12 countries where Ipsos has trend data.

“There is real support among the public for a green economic recovery from the Covid-19 crisis, and climate change remains the single biggest environmental concern globally. What remains to be seen, however, is whether and how people plan to change their behaviour to combat climate change when they adjust to a new life once the Covid-19 pandemic passes.

A strong positive is that people believe that governments around the world should be acting now to avoid failing their citizens on combating climate change. Nearly six in ten would be put off from voting for a party if they didn’t take climate change seriously, sending a strong message to all political parties around the world about the importance of this topic to voters.”