This year is marked by an overall decline in perception of nations’ reputations, and the top-10 NBI nations are not immune to this overall negative sentiment. While Germany retains the top position in the 2020 Anholt-Ipsos Nation Brands IndexSM (NBI) for the fourth year in a row, this year is marked by noticeable gains and losses among leaders in the NBI ranking:

Germany again ranks #1 out of 50 nations, marking the sixth time Germany tops the NBI list. Germany was the highest-ranked NBI nation in 2008, 2014, 2017, 2018, 2019, and 2020. Germany is just one year away from matching the United States’ record of seven years as the top NBI nation. Germany’s leading advantage is its consistent strengths across multiple reputational categories, particularly: Exports, Immigration and Investment, Culture, and Governance. Global citizens have positive feelings about buying German products, the employability of the German people, and the appeal of investing in German businesses, placing Germany first in all three categories for 2020.

The United Kingdom gains through culture, people and tourism

France slips in the ranking

Global attitudes toward France remain strongly positive overall, despite dropping from second to fifth place in 2020. France ranks in the top-5 on the NBI 2020 ranking. This year, France’s reputational strengths are on the Culture and Tourism categories – driven by positive opinion about its contemporary culture and the vibrancy of its cities. Conversely, France’s relative brand weaknesses are on the Immigration and Investment and People categories – particularly on the perception of equality in society and the welcoming nature of its people.

In 2020, the first NBI measurement since the COVID-19 Pandemic, the United States and China are the nations with the most notable declines on overall NBI rank. The United States - which held NBI’s top spot on seven occasions: in 2009-2013, 2015, and 2016 - has dropped four positions from sixth place in 2019 to 10th place in 2020. The United States’ decline is triggered by a sharp decrease in public opinion of its Governance, People, Tourism, as well as Immigration and Investment – traditional areas of reputational strength for the United States. China - whose reputation remained stable at 23rd place over the past four years – sees an overall rank decline of 12 positions from 23rd place last year to 35th place this year. China’s ranking declines across multiple categories this year – particularly Governance, People, Tourism, and Immigration-Investment.

These outcomes denote the lowest NBI rankings ever recorded for both of these nations. Most notably, the United States and China see score declines on the same reputational categories, implying that they are both facing similar reputational challenges stemming from trade tensions and the COVID-19 Pandemic.

Australia and New Zealand are two nations with notable improvements on the overall NBI rank. It is possible that their highly-respected handling of the global public has positively impacted their global standing. Both nations improve by two positions each: Australia’s overall NBI rank improves from 10th place to eighth place, while New Zealand's improves from 14th place to 12th place - marking the highest NBI rankings ever recorded for both of these nations.

Australia and New Zealand are positively perceived on the Governance, People, and Immigration and Investment categories - which suggests that the manner in which both of these nations have approached the challenges imposed by the COVID-19 Pandemic are reflecting positively on these nations’ leadership, infrastructure, and societal values.

The top-5 ranking for the NBI 2020 Exports category remains generally unchanged from 2019, with the exception that Japan rises to first place and the United States falls to second. Germany, the United Kingdom, and Canada round out the list of top-5 nations - in the exact same rank order as last year.

The top-5 ranking for the NBI 2020 Culture category sees some noticeable re-organization in 2020. Italy improves from third place in 2019 to first place in 2020. The United Kingdom improves from fifth place to third place while France falls from first place to second place and the United States falls from second place to fifth place. Germany’s fourth place ranking on this category remains unchanged from last year.

The top-5 ranking for the NBI 2020 People category sees some minor changes from 2019. The composition and ranking of the top-3 nations – Canada, Australia, and Italy – remains unchanged. However, the United Kingdom makes its appearance in the top-5 of category after improving from seventh place in 2019 to fourth place in 2020 and replacing Switzerland; and New Zealand makes its debut in the top-5, after improving from ninth place last year to fifth place, replacing Sweden.

The top-5 ranking for the NBI 2020 Tourism category sees some slight reconfiguration in 2020. Italy and France remain at the top of the list. The United Kingdom improves from fourth place in 2019 to third place this year, and consequently Spain falls from third place last year to fourth place in 2020. Greece re-enters the top-5 for the first time since 2018, ranking in 5th place - replacing the United States.

The top-5 ranking for the NBI 2020 Immigration and Investment category remains largely unchanged. Canada, Germany, Switzerland, and the United Kingdom retain the same rank from last year. Sweden makes its debut in the top-5 at number five, after improving from sixth place and replacing the United States – marking the first time the United States has ever fallen out of the top-5 on this reputational category. 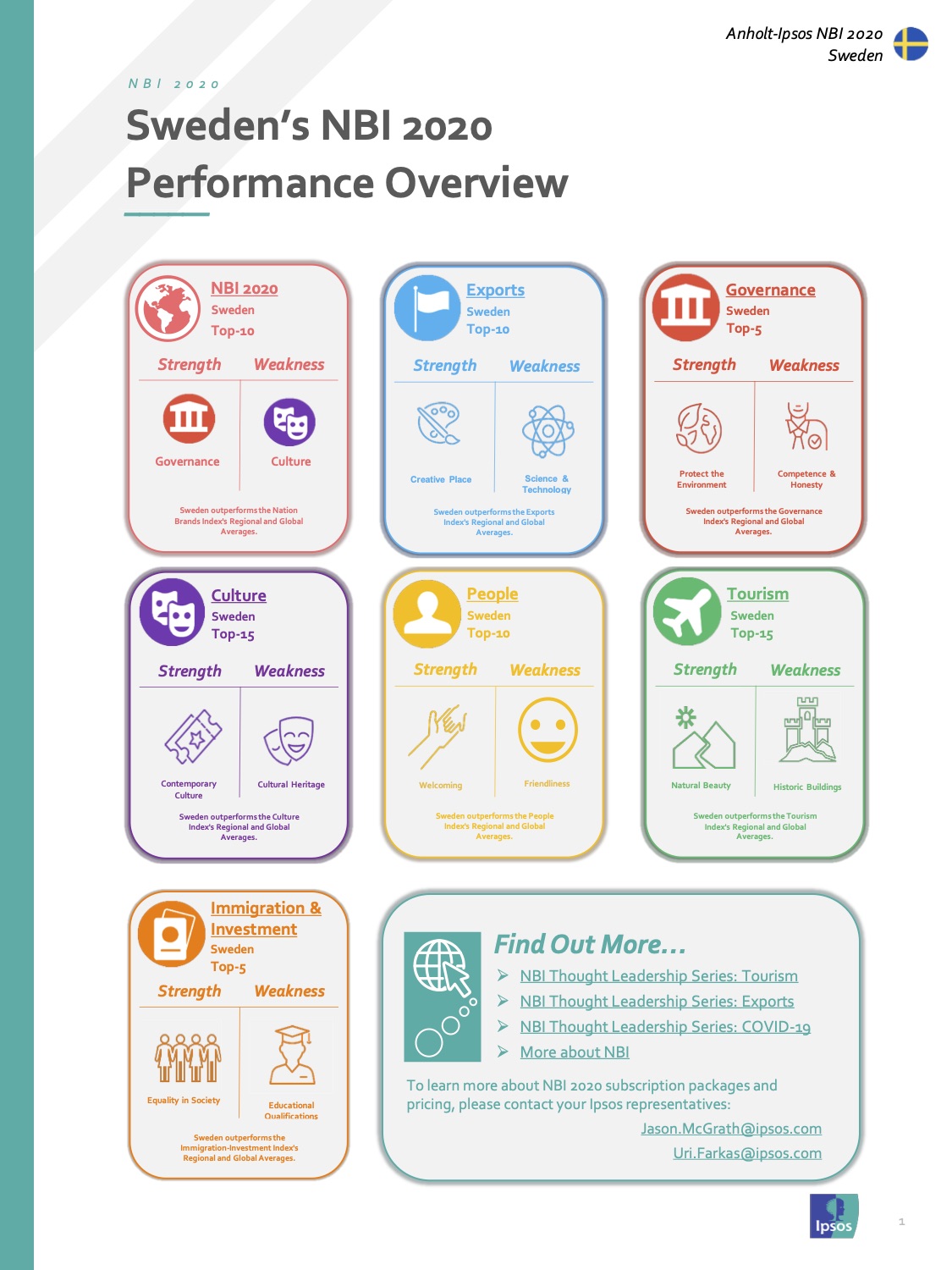