Every year, with the exception of last year due to the loss of our beloved Walid Azzi, we publish advertising expenditures across the MENA region in collaboration with ArabAd. And every year while analysing the data my frustration grows. Because the way we report the numbers is based on official rate cards, and those rate cards are never respected due to competition over price and a lack of transparency. Rate cards do not reflect reality because the numbers reported are inflated and do not represent what advertisers are actually paying.

Every time we have tried to find ways to reduce the numbers – and to report figures that are closer to reality – we have faced fierce objection from agencies requesting that we report our numbers based on (inflated) rate cards. Those who objected then complained that we were reporting unrealistic numbers. This really created a big dilemma for us. So, to solve this issue, we decided to do things differently this year. We decided to report our estimation of the real numbers in this region, something that has never been done before. These numbers are by country and by media and my analysis will be based on these numbers from now on, not on inflated numbers.

How did we do it? By following these steps:

The comments of my colleagues, who analyse the markets of each country and can be found in the following pages, are based on the inflated advertising expenditure numbers (as per rate card). My analysis of the regional numbers, however, is based on the estimated expenditures, which is revealed for the first time in such a detailed fashion in our region.

This very interesting exercise has revealed that things are not as bad as we are led to believe. It shows that we have a strange way of indicating our industry is in bad shape.

The reported figures according to rate cards total around $22 billion in the MENA region, including digital. Our estimation shows that the real numbers are close to $3.9 billion. I believe we hit $5 billion a few years ago, but that number has since fallen to $3.91 billion, which is better than the $2.5 billion being predicted by many players in the market. So the numbers are not that bad. 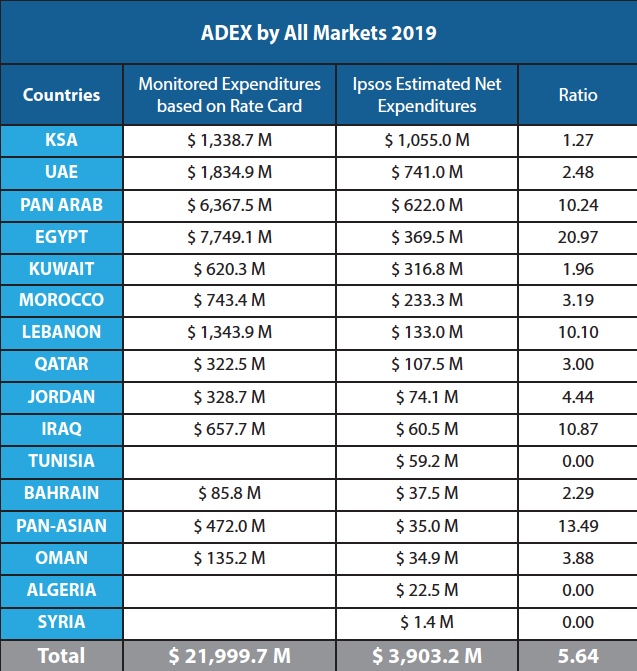 Looking at the numbers by media, digital takes the lead with $1.26 billion. This number might increase to more than $2 billion if we consider local brands that are targeting countries outside of the MENA region. But our numbers take into consideration advertising campaigns that target this region only, and we all know how complicated it is to measure digital. Nevertheless, digital has come a long way and has taken the lead as the biggest media in our region.

Our estimation also shows that around 70 to 75 per cent of this number goes to Facebook and Google. Also, it is worth mentioning that this money is being sent out of our region and is not being invested or spent here.

I am aware that this figure will be extensively questioned, because for many people TV is witnessing its last days. But although adspend on TV has dropped from around $2 billion over the course of the past few years, we can safely say it is still in the game. And despite the very low estimated numbers shared by many people, there are several markets where TV is still big, such as Saudi Arabia, Egypt, Morocco and, of course, the pan-Arab market. Also, after talking to many players, a lot are predicting that TV could witness an increase in 2020, with many advertisers considering going back to TV.

The third media, and which is really underestimated, is OOH. Our regional estimate is that the total advertising expenditure on OOH is close to $825 million, with Saudi Arabia and the UAE local markets being the biggest. This is a medium that is huge, is still growing, and is still not measured properly yet. And we at Ipsos will be focusing on measuring it more comprehensively in the coming years. 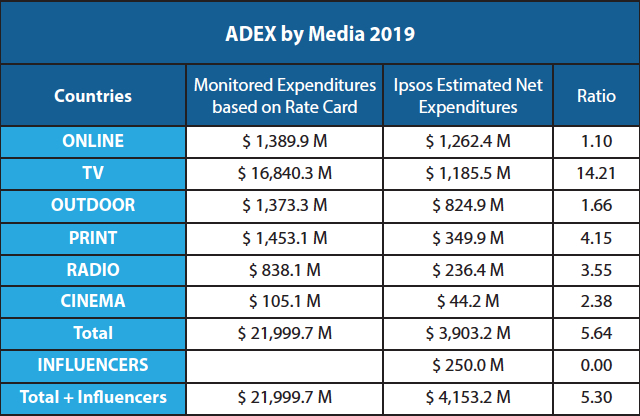 Newspapers have fallen quite dramatically, but despite all the claims that newspapers are dead they came in fourth and are generating more than $303 million across the region. In many countries, including Saudi Arabia, the UAE and Kuwait, newspapers remain one of the biggest media. The problem newspapers face is that they used to generate a lot more money than they do now and their costs are very high, hence the need to adapt.

Radio is another underestimated media and generates $237 million, ensuring its position in fifth place. This is also a medium that has high potential.

Then we have $46 million for magazines and $44 million for cinema. The latter is expected to grow exponentially with the booming of cinema theatres in Saudi Arabia.

If we look at the numbers by country, the whole scene changes compared with the ranking based on rate cards. Saudi Arabia leads with a little over $1 billion, with the two biggest media being digital and OOH. This is because we consider TV in the country to fall under the pan-Arab market, which is ranked in third place with $622 million. MBC, of course, takes the lion’s share of TV adspend. In second position is the UAE with $741 million, with digital and OOH being the biggest.

Egypt comes in fourth and, with a population close to 100 million, is generating $369 million of advertising expenditures. TV is the biggest media, followed by OOH.

Morocco – a very promising market – is ranked fifth with $233 million. Something that needs to be said about Morocco is that it might be the most organised market in the region, alongside Lebanon of course. It has proper joint industry currencies (JICs) for every big media and its three biggest media are TV, OOH and digital.

The other markets are mostly under $100 million, with the exception of Lebanon, which comes in sixth place with $133 million. Despite all the problems that began in the fourth quarter of 2019, one good thing that happened in Lebanon – and which was initiated by ArabAd – is the round table that gathered together all of the big media agencies in the country to discuss the inflated adspend numbers that are based on rate cards. We all want to come up with a better estimation of the real numbers.

We are therefore talking about a total of $3.91 billion, with the three biggest media being digital, TV and OOH. But there is one important factor that a lot of people are missing. And that is the boom in influencer marketing. This new media should not be neglected and should be added to the equation.

We will hopefully start measuring this new media soon, but there are so many different estimations about the size of this market – estimations that range from $60 million to more than $1 billion. However, my estimation, which is based on many calculations, is around $250 million, and this number is set to grow exponentially in the coming years. So, by adding this to the equation, we reach around $4.16 billion in total advertising expenditures in the MENA region in 2019.

Even if this detailed exercise is being done for the first time, and the market has fallen from between $4.5 billion and $5 billion five or six years ago, we have not reached the low point of $2.5 billion or $2.7 billion that some people have estimated. The market is changing, is shifting, and we need to adapt, but at the same we should not neglect the fact that media such as TV, OOH and even newspapers are not dead. They are still alive and kicking and should start to grow again in line with global trends.

This drop in advertising expenditures compared to a few years back can be explained. If you look at the tables below, they show how people are consuming different media. We have used a few examples of countries where TV used to be consumed heavily – such as Saudi Arabia, the UAE and Kuwait – and shown that, in the last couple of years, the average time spent watching TV in those countries has fallen. In Saudi Arabia, TV viewing has dropped from 6h 44 min to 4h 51 min; in the UAE from 4h 28 min to 4h 08 min; and in Kuwait from 3h 50 to 2h 35. This decrease in TV consumption can be explained by the higher penetration of OTT platforms, particularly amongst Millennials and Generation Z. In both demographics, the penetration of OTT platforms jumped from 47 per cent to 53.5 per cent in the UAE, and from 34 per cent to 45.4 per cent in Saudi Arabia in the last couple of years. 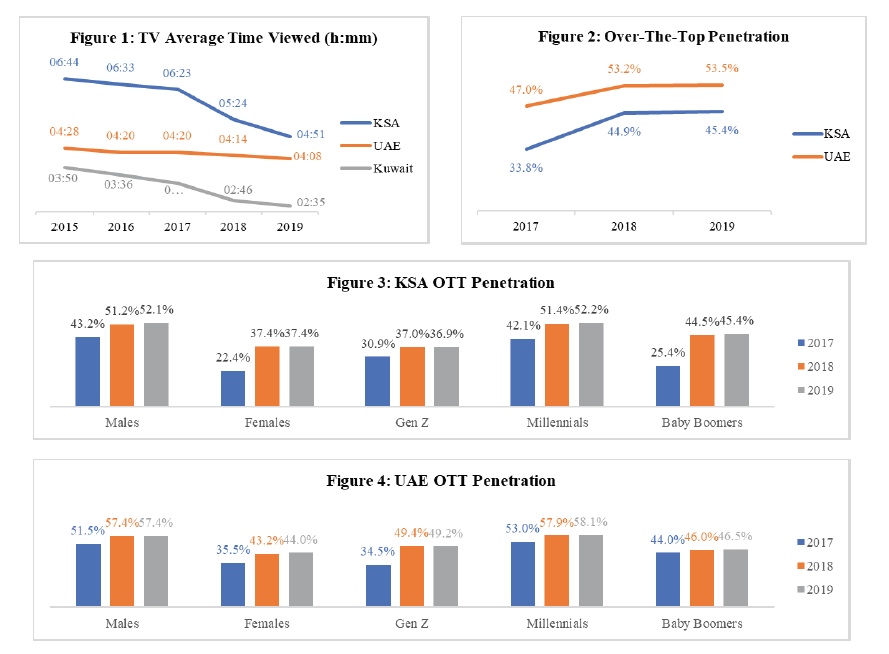 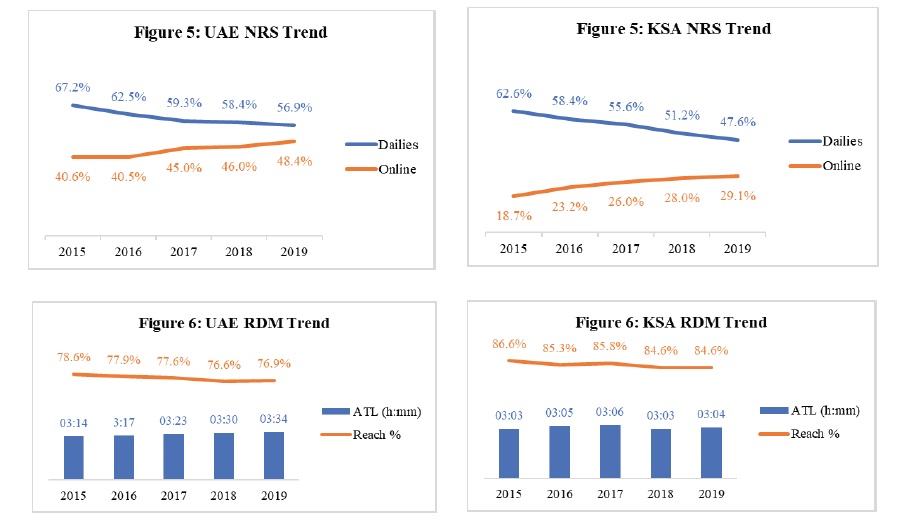 Not only TV consumption has been affected. Readership habits in the region have changed, too, as our national readership survey reveals. It shows a drop in readership from 67.2 per cent to 57 per cent in the UAE, while the online consumption of daily newspapers increased from 40 per cent to 48.4 per cent. In Saudi Arabia, the readership of newspapers fell from 62.6 per cent to 47.6 per cent, while online readership went from 18.7 per cent to 29.1 per cent. Radio trends also reveal a slowdown in daily reach, but a consistent (and even an increase) in the amount of time spent listening to radio in many countries, including the UAE and Saudi Arabia.

Other tables below show the top 10 brands, products and sectors in the region. They are based on monitored numbers, which are based on rate cards, and the tables speak for themselves. The analysis carried out by my colleagues from different markets includes one very important article about online impressions in the region and the source of digital revenues and share. 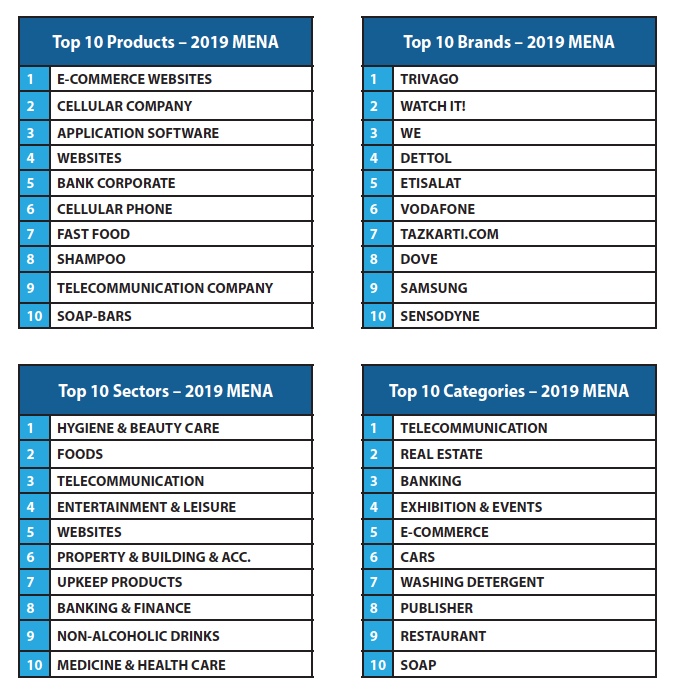 One final comment. I believe this detailed exercise, which has been done for the first time and reveals Ipsos’ estimation of real advertising expenditures in our region, was a very important decision and will hopefully be repeated every year. Because it reveals real numbers and the ratio between those numbers and the inflated figures based on official rate cards. Finally, I’d like to thank the devoted team at Ipsos for putting so much effort into releasing our numbers for 15 different countries on a daily basis. I hope you enjoy the read.