Toronto, Ontario, February 4th, 2020 — With the 2020 edition of the World Economic Forum (WEF) in Davos now wrapped up, three global polls conducted by Ipsos specifically for the event reveal a wealth of information about Canadians: what we’ve changed, where we stand, and what we can expect for the future.

How to tackle climate change was a key point of contention at this year’s Forum. One Ipsos study for the WEF found that most people (69%) in 28 countries around the world claim to have already made changes regarding the products and services they buy or use, specifically out of concern about climate change.

Canada is very much in line with the global average, with 68% of Canadians say they’ve made changes. As with nearly every country surveyed, most (53%) say they’ve made just a few changes, while fewer (15%) claim to have made a lot of changes.

Canada ranks 15th overall on change, ahead of the United States, which ranks 25th out of 28 countries. Countries with the highest number of people claiming to have changed their consumer behaviour include India (88%), Mexico (86%), Chile (86%), China (85%), and Malaysia (85%).

Other areas where Canada bucks the world trend on adopting more climate-conscious consumer behaviour include how often they reuse products (73%. +23 pts above the global average), how much energy they use in their homes (68%, +13 pts), and their choice of motor vehicle (28%, +5 pts). 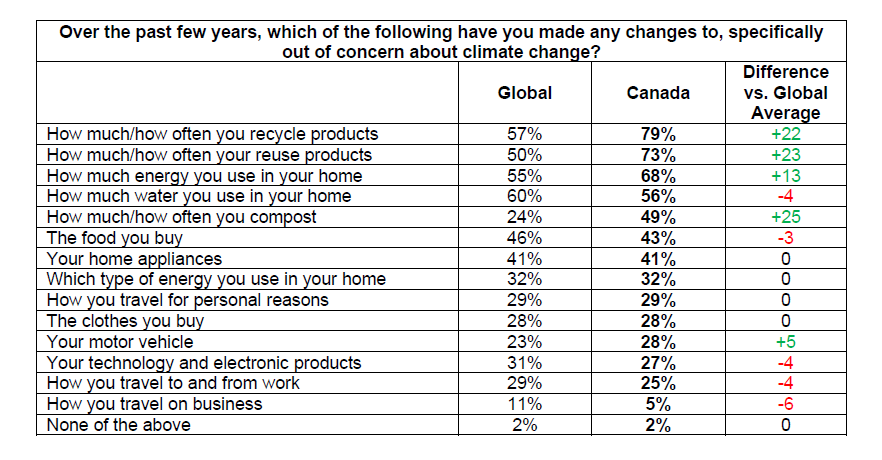 Thinking about themselves in relation to their parents’ generation, Canadians think they have (or will have) it better than their parents in some respects, but worse in others. On the positive side, most Canadians say they are doing better when it comes to things like access to information, access to entertainment, with net perceptions (“better” minus “worse”) firmly in positive territory – in line with most of the 33 countries surveyed. Canadians are also mostly optimistic about their chance at having a good education, being free to be true to themselves, and being able to travel abroad.

Asked to look ahead to how today’s youth will fare in comparison to their parents, Canadians’ views are even more bleak. Across the board, fewer expect the next generation to do better than the one before, while more expect them to do worse.

A majority expect young Canadians to have it worse than their parents on everything from being safe from crime to being able to live comfortably in retirement. Home ownership is again the metric Canadians are most pessimistic about: two in three (68%) think today’s youth will fare worse than their parents on being able to own their own home, while just 17% think they’ll have it better – a 51-point gap.

Jobs are a critical issue when it comes to Canadian youth. While just enough Canadians (38%) think that they themselves have it better than their parents in terms of having a successful career to keep net perceptions positive (+6 points), only 33% think today’s youth will be more likely than their parents to have successful careers. Four in ten (40%) think they will have it worse, placing net perceptions at -7 points overall.

Likewise, more than half of Canadians (55%) expect youth to do less well than their parents on job security, while only 23% expect them to have an easier time of finding a secure job, creating a perception gap of -32 points.

Despite widespread pessimism on the future of job security in Canada, automation of jobs does not appear to be a major cause for concern. Another global Ipsos study released at the WEF asked employed residents of 28 countries around the world how likely their job was to be automated within the next 10 years. Globally about one in three workers (35%) say it’s likely (10% very/25% somewhat) their job will be automated, leaving a majority (54%) who think it unlikely and one in ten (11%) who aren’t sure.

Canadian workers appear less concerned about the possibility of their jobs being automated within the next decade: only one in four (25%) think it likely (9% very/16% somewhat), while two in three (65%) think it unlikely, and 10% don’t know. This places Canada 20th out of 28 countries surveyed, just ahead of the United States, where 24% think that job automation is likely within the decade.

Canadians are also more confident about having the skills they need to ensure their job continues to exist in the future. Three in four (74%) are confident, placing Canada above the global average of 69%. Canada ranks 13th out of 28 countries on confidence, below India in first place (84%) and the United States in third place (82%), but well above last-placed Italy (61%), Poland (51%), Russia (50%), South Korea (33%), or Japan (23%).

These are some of the findings of three Ipsos polls conducted on the Global Advisor online platform. The first study (on climate change) was conducted among 19,964 adults aged 18-74 in the United States, Canada, Malaysia, South Africa, and Turkey, and 16-74 in 23 other countries. The survey was fielded between October 25 and November 8, 2019. The sample consists of approximately 1,000 individuals in each of Australia, Brazil, Canada, China (mainland), France, Germany, India, Italy, Japan, Spain, Great Britain and the U.S., and 500 individuals in each of Argentina, Belgium, Chile, Hungary, Malaysia, Mexico, the Netherlands, New Zealand, Peru, Poland, Russia, Saudi Arabia, South Korea, South Africa, Sweden and Turkey.

The third study (on job automation) was conducted among 13,751 adults aged 18-74 in the United States, Canada, Malaysia, South Africa, and Turkey, and 16-74 in 23 other countries. The survey was fielded between September 20 and October 4, 2019, except for South Korea, Malaysia, South Africa, and Singapore, where it was fielded between October 25 and November 8, 2019. The sample consists of approximately 1,000 individuals in each of Australia, Brazil, Canada, China (mainland), France, Germany, Italy, Japan, Spain, Great Britain and the U.S., and 500 individuals in each of Argentina, Belgium, Chile, Hungary, India, Mexico, the Netherlands, Peru, Poland, Russia, Saudi Arabia, Sweden and Turkey.