Toronto, ON, October 16, 2019 —With unmet expectations and broken promises a focal point of the campaign, new Ipsos polling done exclusively for Global News reveals what Canadians think about their political leaders and the extent to which they trust them to deliver on their campaign pledges.

When it comes to keeping the election promises made during this campaign, the Conservatives come out as the top pick for being the party most seriously committed to keeping their election promises (28%), followed by the NDP (23%), the Liberals (22%), Greens (14%), People’s Party (6%), and Bloc Québécois (6%). Those in Alberta (50%) and Saskatchewan and Manitoba (46%) are more likely to think the Conservatives under Andrew Scheer are the most seriously committed to keeping their promises, whereas those in Quebec (28%) and Ontario (27%) see the Liberals as being the most seriously committed to doing the same. However, political cynicism remains high, as three-quarters (78%) agree (25% strongly/52% somewhat) that regardless of which party leader becomes prime minister, they will break their election promises.

While more Canadians think the Conservatives will keep their word more than the other parties, both Trudeau (28%) and Scheer (27%) are in a virtual tie over who would make the best prime minister. Just last week, Justin Trudeau had a five-point lead over Andrew Scheer. That lead has since evaporated, with Singh benefitting from this shift in perceptions.

Regional divides are clear when it comes to who prefers which candidate; Those in Quebec (34%) prefer Trudeau, while those in Alberta (55%) and Saskatchewan and Manitoba (37%) would rather see Scheer lead the country. The two major party leaders are followed by Singh (23%), May (10%), Bernier (4%), and Blanchet (4%). Another 4% simply don’t know which party leader would make the best PM.

When it comes to the two main party leaders, there is a distinct characterization in the minds of voters. Compared to the other party leaders, Trudeau is seen as someone who will best represent Canada on the world stage (30%), whereas Scheer outperforms when it comes to being seen as someone who will tackle Canada’s deficit (34%), spend taxpayer money wisely (25%), and get things done (25%).

How well do these perceptions align with the issue that Canadians care about the most? The most recent Ipsos polling has found that healthcare, climate change, and affordability are the top three issues that are the most determinant of how Canadians will vote next week. Therefore, it is very telling that a quarter (24%) of Canadians say no party leader is best to help improve health care, 2 in 10 (21%) say no leader would be best to tackle climate change, and a 3 in 10 (31%) say no one will make things more affordable.

Perhaps then it is not surprising that 40% agree (12% strongly/28% somewhat) that they don’t really like any of the parties this election. Even taking politics out of the equation, when asked with which major party leader they would like to have a coffee or beer, almost 3 in 10 (28%) said none of them. Of the party leaders, Singh is the most popular (22%) drinking mate, followed by Trudeau (20%), and Scheer in a distant third (14%). That the major party leaders are not seen as addressing the issues that matter most to Canadians and dislike for the parties and their leaders may mean that those who are still on the fence about their vote choice may simply stay at home. 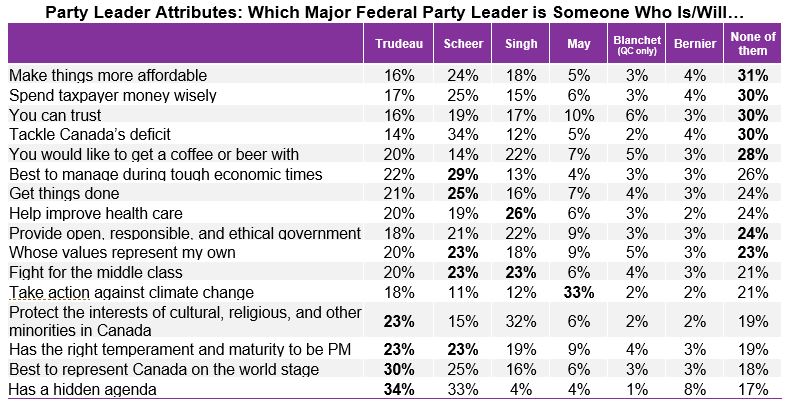 These are some of the findings of an Ipsos poll conducted between October 11 and 13, on behalf of Global News. For this survey, a sample of n = 2,204 Canadians aged 18+ was interviewed. A sample of n = 1,504 was interviewed online, via the Ipsos I-Say panel and non-panel sources, and respondents earn a nominal incentive for their participation. A sample of n = 700 Canadians aged 18+ was interviewed by live-interview telephone interviewers by landline and cellphone, using random-digit dialing. Quotas and weighting were employed to balance demographics to ensure that the sample's composition reflects that of the adult population according to Census data and to provide results intended to approximate the sample universe (weighting efficiency = 66.9%). The precision of Ipsos polls which include non-probability sampling is measured using a credibility interval. In this case, the poll is accurate to within ± 2.4 percentage points, 19 times out of 20, had all Canadians been polled. The credibility interval will be wider among subsets of the population. All sample surveys and polls may be subject to other sources of error, including, but not limited to coverage error, and measurement error. Ipsos abides by the disclosure standards established by the CRIC, found here: https://canadianresearchinsightscouncil.ca/standards/