New York, April 6, 2020 — London is the world’s top “City Brand”, with Sydney, Paris, New York, and Rome rounding out the top five, according to the people in ten countries surveyed for the Anholt-Ipsos City Brands Index. A total of 5,000 people ranked fifty cities worldwide by evaluating their international status (Presence), physical appeal (Place), amenities (Prerequisites), warmth of their inhabitants (People), activities (Pulse), as well as their educational and business qualities (Potential). On these qualities, top-ranked London is seen as having the greatest Presence and Potential, Vienna is the best Place, Vancouver has the most stellar Prerequisites, Sydney the warmest People, and Paris the strongest Pulse.

“London is widely seen as a world cultural capital, whatever its political relationship with Europe,” Anholt said. 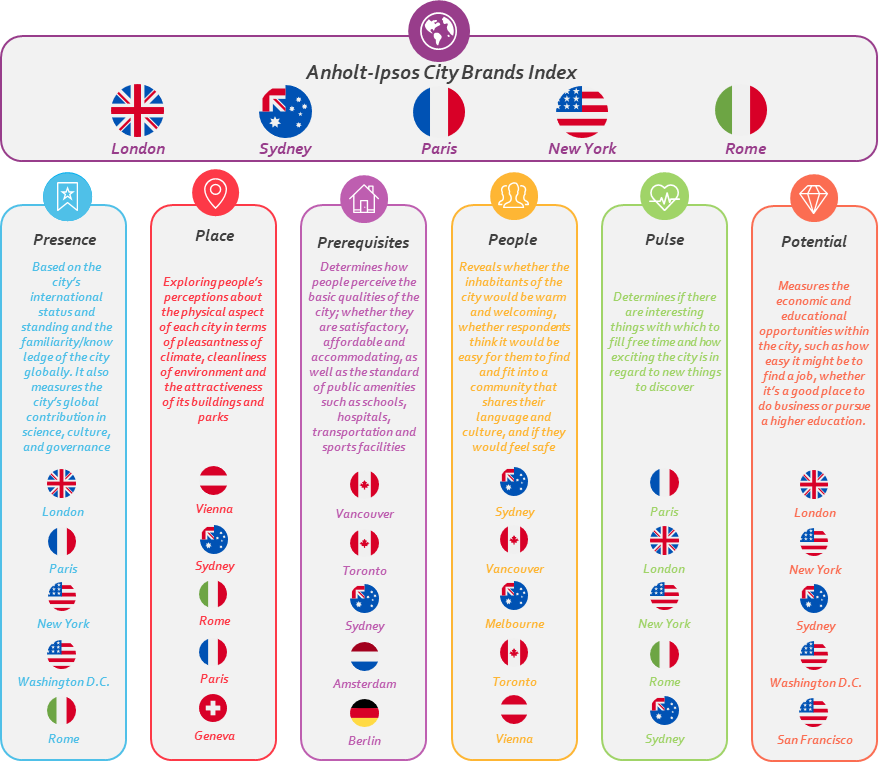 Fieldwork for this study was conducted from January 2-17, 2020; prior to the coronavirus outbreak. However, this data may serve as a useful benchmark to destinations as they seek to recover their tourism markets, develop plans based on the data to highlight strengths and demonstrate resiliency, and track progress throughout the recovery. “These measurements of how the world sees its cities are a fascinating pre-pandemic baseline: no matter how powerful and positive a city’s image may be, the world’s cityscapes are startlingly empty for now. But as lockdowns are gradually relaxed and economic activity picks up once again, we will find out what the new normal looks like, and whether this year’s winners remain on top, or whether some unexpected shift has occurred in people’s behaviors, travel patterns, and views of the world around them,“ Anholt commented.

The 2020 Anholt-Ipsos City Brand Index sees noticeable re-arrangement of the cities in the top-10. London ranks in first place for the first time since 2013, on gains in four out of the six brand categories: Presence, Place, Pulse, and Potential. Opinion of Sydney’s brand improved in two out of the six categories (Presence and Pulse) to put it in second place overall. Paris drops from first place in 2017, to third place in 2020, with losses in five out of the six categories (Presence, Place, Prerequisite, People, and Potential). 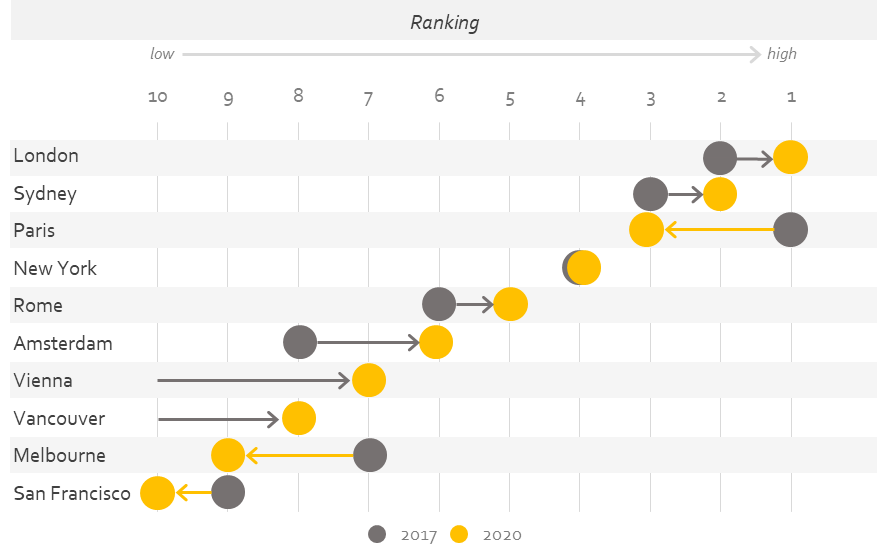 Cities like New York (#4), Rome (#5), Amsterdam (#6), Melbourne (#9), and San Francisco (#10) retain their rank in the top tier again this year. However, 2020 introduces new cities into to the top-10. Vienna, which had previously occupied 9th place in 2011 and 2013, now makes its re-entry into the top-10, with its highest-ever ranking - 7th place. This year Vienna is the best Place; global citizens also rank Vienna highly for its People (#5), and its Prerequisites (#8). Vancouver, which ranks in 8th place in 2020, is the first Canadian city to rank in the top-10 list since 2013 when Toronto ranked in 8th place. In 2020, global citizens deem Vancouver to have the best Prerequisites; moreover, the warmth of Vancouver’s People (#2) and the city’s Potential (#5) further boosts its brand.

European cities overall rank highly, and generally occupy the top half of the ratings: London, Paris, Rome, and Amsterdam rank within the top tier (1-10); Vienna, Berlin, Barcelona, Geneva, Copenhagen, Munich, and Stockholm within the second tier (11-20); Madrid, Dublin, Prague, and Helsinki within the third tier (21-30); Moscow, Warsaw, and Basel in the fourth tier (31-40); and Istanbul in the fifth and final tier (41-50).

The appeal of cities from the old and new world come from different categories.

European cities are most highly ranked on the Place and People categories:

The Anholt-Ipsos City Brands Index evaluates a total of six cities from the Middle East and Africa. Only Dubai ranks in the third tier (21-30), while Johannesburg, Cairo, Doha, Riyadh, and Nairobi rank in the fifth and final tier (41-50). The relative city brand strengths for Dubai and Cairo are their Pulse qualities.

Asia and the Pacific

The Asia Pacific region receives the most divergent ratings on the Anholt-Ipsos City Brands Index. The 12 cities from this geographic region occupy positions across all tiers in 2020: Both Australian cities, Sydney and Melbourne, rank in the first tier (1-10); Tokyo in the second tier (11-20); Singapore, Seoul, and Hong Kong in the third tier (21-30); Beijing, Shanghai, and Bangkok in the fourth tier (31-40); and Taipei, Jakarta, and Mumbai in the fifth tier (41-50). Cities in this region are mostly recognized for their Presence:

Tokyo’s city brand experiences cyclical boosts and declines. In 2011, Tokyo ranked in 10th place, only to observe a decline to 17th in 2013, then see two successive improvements in 2015 and 2017 (to #15 and #11, respectively), and finally a decline to 16th in 2020. Varying opinion of Tokyo on the Place, Prerequisite, People, and Potential categories lead to these recurring ranking changes; however, a consistently strong opinion of Tokyo on the Presence and Pulse categories shields the city from wild swings on its global brand assessment.

For the Anholt-Ipsos City Brands Index, Ipsos conducted 5,000 interviews online in 10 panel countries (Australia, Brazil, China, France, Germany, India, Russia, South Korea, UK, and USA) among adults aged 18 or over. Data are weighted to reflect key demographic characteristics including age, gender, and education of the 2019 online population in each surveyed country. Additionally, race/ethnicity has been used for sample balancing in the countries where it is applicable. Fieldwork was conducted from January 2-17, 2020.

The list of 50 cities is as follows, listed by region:

Simon Anholt designed and launched the Nation Brands Index in 2005. Since 1998, he has advised the presidents, prime ministers and governments of 56 countries, helping them to engage more imaginatively and effectively with the international community. He is recognized as the world’s leading authority on national image. Professor Anholt also publishes the Good Country Index, a survey that ranks countries on their contribution to humanity and the planet and is Founder-Editor Emeritus of the Journal of Place Branding and Public Diplomacy. He was previously Vice-Chair of the UK Foreign Office Public Diplomacy Board. Anholt’s TED talk launching the Good Country Index has received 6 million views, and his more recent one launching the Global Vote, over a million. He has written five books about countries, cultures and globalization and is an honorary Professor of Political Science at the University of East Anglia. His latest book, The Good Country Equation, will be published in August 2020.