Toronto, ON, Nov 22, 2020 – A majority of global citizens support border closures in an effort to combat COVID-19, as relatively few believe the coronavirus is contained, according to new Ipsos polling conducted on behalf of the Halifax International Security Forum. The poll of over 21,000 people in 28 countries reveals that most global citizens are supportive of turning more insular in order to fight the virus at home.

New Zealand Gets Tops Marks on COVID-19 Response; US Earns a Failing Grade

Global citizens were asked to assess whether or not certain countries or organizations have shown good leadership in dealing with the COVID-19 pandemic. New Zealand earns top marks from global citizens, with 74% believing that New Zealand has demonstrated good leadership. However, only 22% believe the same can be said about how the United States has dealt with the pandemic. The chart below shows the proportion of citizens who believe that each country/organization tested has shown good leadership. 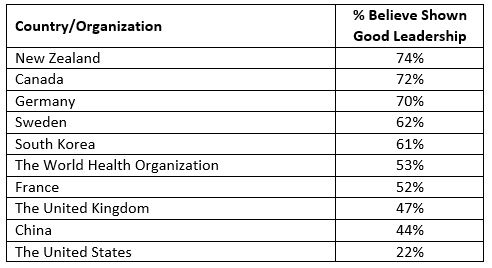 These are the findings of an Ipsos Global Advisor survey conducted between August 21st and September 4th, 2020. The survey instrument is conducted monthly in 28 countries around the world via the Ipsos Online Panel system. The countries reporting herein are Argentina, Australia, Belgium, Brazil, Canada, Chile, China, Colombia, France, Great Britain, Germany, Hungary, India, Israel, Italy, Japan, Malaysia, Mexico, Peru, Poland, Russia, Saudi Arabia, South Africa, South Korea, Spain, Sweden, Turkey and the United States of America. For the results of the survey presented herein, an international sample of 21,104 adults aged 18-74 in the US and Canada, and age 16-74 in all other countries, were interviewed. Approximately 1000+ individuals participated on a country by country basis via the Ipsos Online Panel with the exception of Argentina, Belgium, Chile, Colombia, Hungary, India, Israel, Malaysia, Mexico, Peru, Poland, Russia, Saudi Arabia, South Africa, South Korea, Sweden and Turkey, where each have a sample approximately 500+. Weighting was then employed to balance demographics and ensure that the sample's composition reflects that of the adult population according to the most recent country Census data, and to provide results intended to approximate the sample universe. A survey with an unweighted probability sample of this size and a 100% response rate would have an estimated margin of error of +/-3.1 percentage points for a sample of 1,000 and an estimated margin of error of +/- 4.5 percentage points 19 times out of 20 per country of what the results would have been had the entire population of adults in that country had been polled. All sample surveys and polls may be subject to other sources of error, including, but not limited to coverage error, and measurement error.