Three in four people in 16 countries expect their governments to make protection of the environment a priority when planning a recovery from the coronavirus pandemic, according to a global Ipsos poll conducted to mark World Environment Day. These new results are confirming the worldwide importance of environmental issues as discussed in Ipsos’ press release on Earth Day on 22 April this year.

Disagreement over making the environment a government priority in a COVID-19 recovery, is highest in Germany (36%), South Korea (29%), Japan and Russia (27%), United States and Canada (23%). 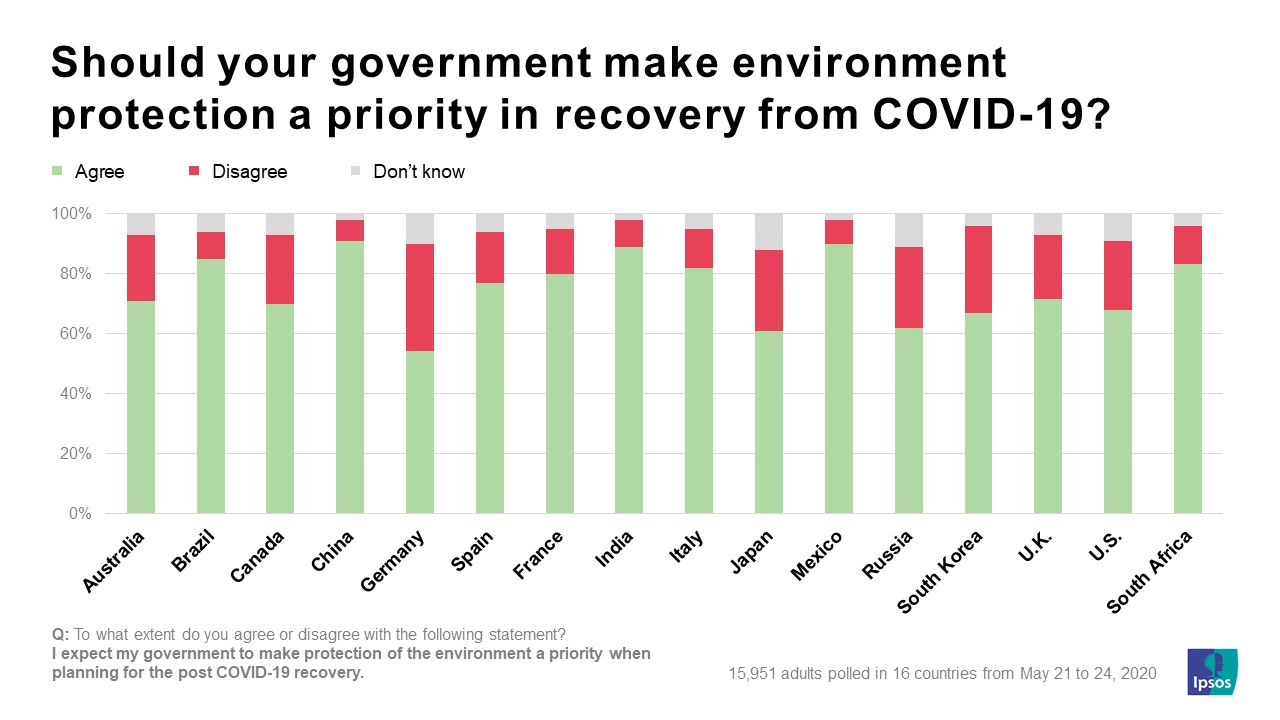 Added to this, there is a view that the environment is a personal priority for people, with half of respondents disagreeing that protecting the environment is far down on their list of priorities right now. This sentiment is highest in many European countries, including Germany and France (67%), followed by Mexico (65%), Spain and South Africa (60%). 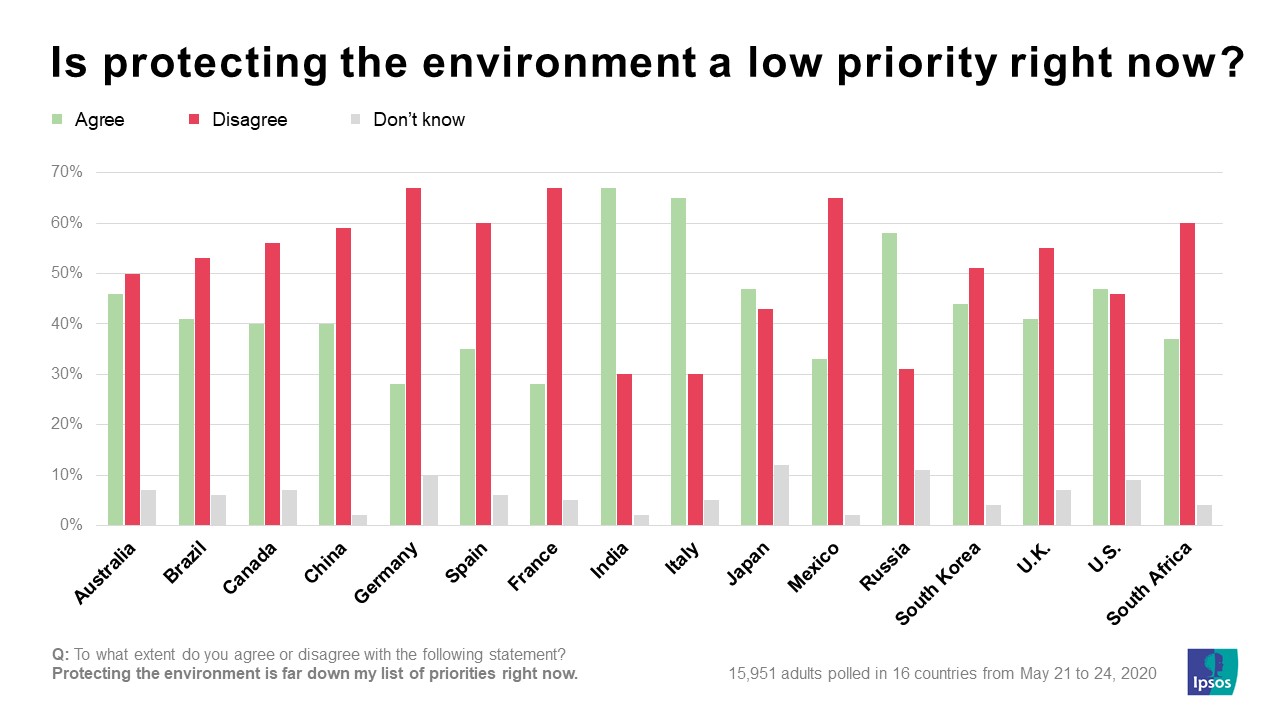 This sentiment is highest again in the developing countries of China (93%), Mexico (91%), South Africa (90%), India and Italy (88%). Meanwhile, the U.S. has the highest proportion of people disagreeing with the seriousness of this threat (17%), followed by Australia (16%).

Overall, people feel a strong responsibility to ensure their generation does not destroy the planet for the next generation. Agreement with this sentiment is close to 80% and over in all the countries with China (92%) and South Africa (91%) topping the list. 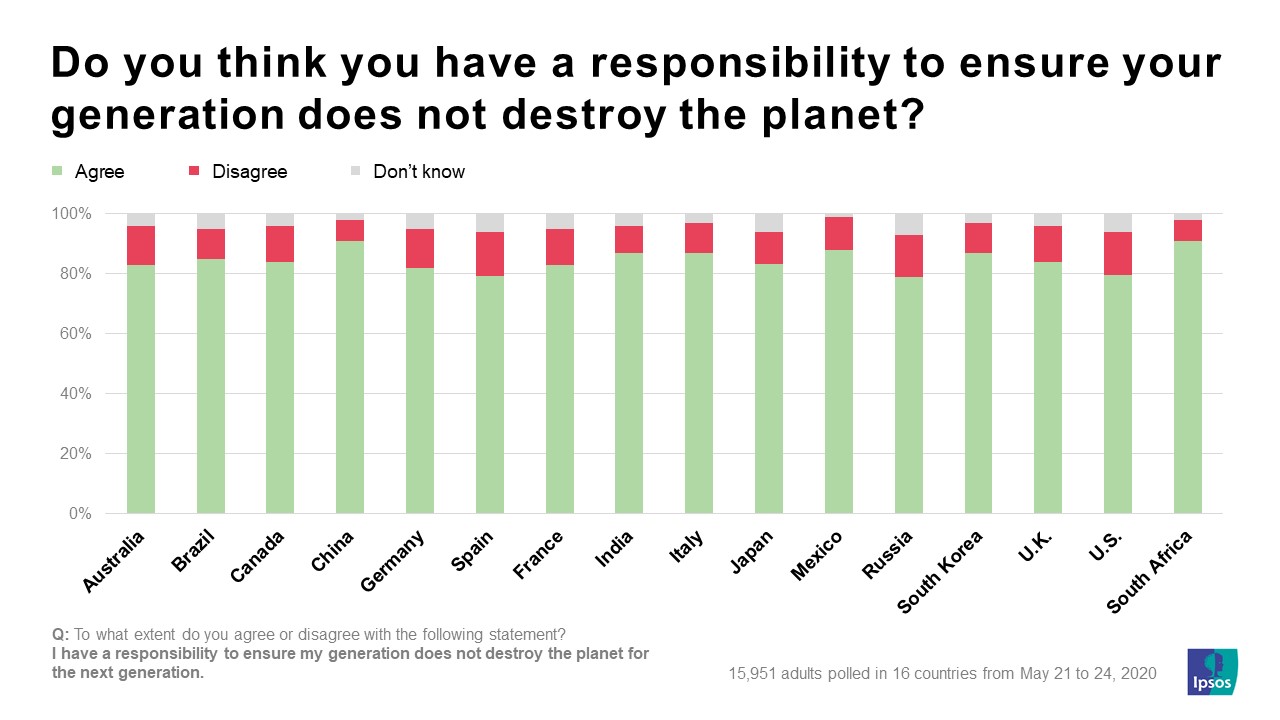 Looking back at Earth Day

The findings shared in this Environment Day release are again highlighting important issues as highlighted in the issues discussed on Earth Day in April 2020. It was said that South Africans’ response to the issues of global warming and climate change was reflective of the environmental issues we had to deal with over the last few years of droughts and the Eskom / energy crisis. Combating water pollution, ensuring high water quality and the availability of future energy sources were mentioned by about a third of online South Africans at that stage. As the size of the population still places stress on scarce resources, three in every ten also want leaders to give attention to this issue.

In South Africa, voting behaviour is entrenched and voters seldom change the party they vote for in an election, but almost two-thirds (64%) agreed that “If a political party’s policies don’t deal seriously with climate change, this would put me off voting for them.” Although we should see this as a prompt for political parties to formulate viable environmental policies, it is important to keep in mind that this study was carried out online – covering almost two-thirds of the South African adult population. (Results are therefore not nationally representative.)