Ipsos undertook a nationally representative study from 14 May to 3 July 2022 in the homes and home languages of 3,600 randomly selected South Africans, 15 years and older. To analyse the political results, the opinions of younger respondents were filtered out and the results from the remaining 3,459 respondents were analysed. It is important to note that these results are representative of all those eligible to vote (in the region of 40 million people). Those registered to vote with the IEC form a much smaller group of between 27 and 28 million South Africans. This poll is thus intended as a gauge of the current political sentiment and not in any way a prediction of things to come.

When it comes to the question “If there were national elections tomorrow, which political party or organisation will you vote for?”, the interviewer hands the electronic interviewing device to the respondent who can then indicate his/her choice of political party on a page resembling a ballot paper, in an imitation of a secret vote. We believe this aids respondents to give honest answers, without influence from others, and it empowers those in very traditional, prescriptive or paternalistic households to express their own opinions.

However, this long before an election it can be very informative to look at one of the other questions in the study. Ipsos asks all respondents to give an opinion on each of six political parties.

Seven different opinions are put to respondents. These seven opinions encompass a spectrum of views, from “I reject this party completely and on principle” to “I will definitely vote for this party” – with five other opinions in-between. Respondents also have the opportunity to say that they do not know the party and therefore they can’t express an opinion . 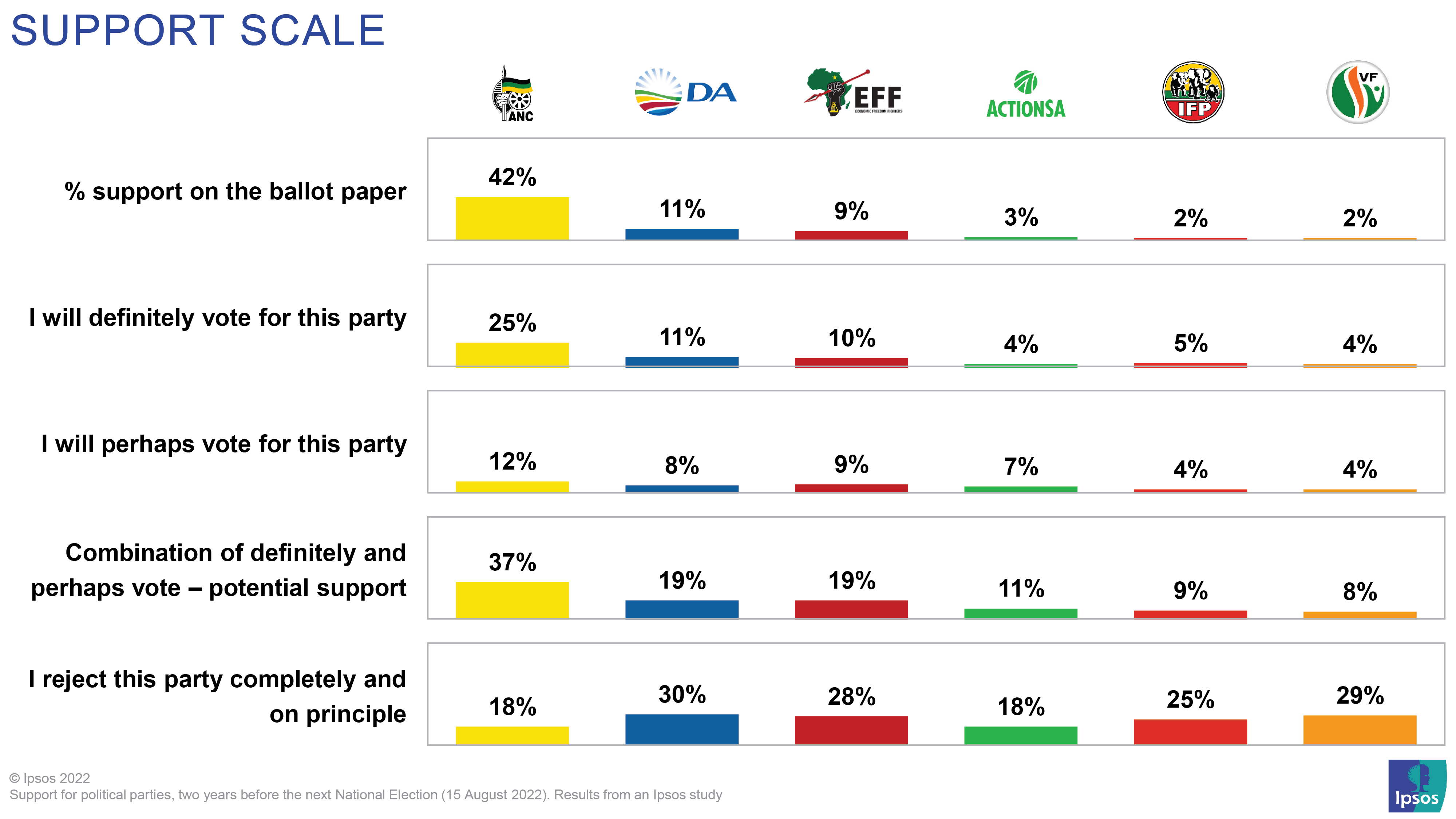 Looking at the combination of the “definitely vote” and “perhaps vote” opinions, all political parties, except the ANC, show a healthy potential support - more than that received on the ballot papers. These results should be motivating to all opposition parties in the sense that their messages potentially have a much larger resonance with the electorate than shown by the straightforward “who would you vote for” question.

The question, however, will be how to translate this latent support into actual votes. “As an opposition political party, you need to prove you are a credible alternative without complaining about everything the government does or does not do. Provide voters with other workable alternatives and be another option – a political party needs to be a positive force, this attracts support”, says Mari Harris, Ipsos SSA Knowledge Director.

According to the results, the potential support for the ANC is 5 percentage points lower than the 42% achieved on the ballot paper, showing that a group of ANC voters vote for the party, as they perceive that they do not have any other option. This poses a very different conundrum to the ANC when compared with that of opposition parties – how do they convince voters to support the party again and turn out to vote?

“Support for the ANC in the whole country is lower than before the local government election (in November 2021). This suggests that new councils have not made a difference. I would be surprised if the ANC gets more than 50% in the 2024 national election,” says Harris.

1 A large number of other political parties were mentioned here. None of them achieved more than 1% of the “vote”.

2 This long before an election, opinions like will not vote/ refuse to answer/ don’t know are legitimate responses. This groups forms 22% of the electorate. This means that more than a fifth of the electorate, even when confronted with the relatively stark choices on a ballot paper, could not choose a party.

3 Please note that this is a very different type of question from the ballot paper, where respondents are asked to choose between parties, here they are asked to express an opinion on each party.