The Nation Brands Index (NBI) was developed in 2005 as a way to measure the image and reputation of the world's nations, and to track their profiles as they rise or fall in six different categories:

The ratings from the above mentioned categories are aggregated into an overall NBI score to determine the reputational strength of each nation; and for over a decade we have published the Nation Brands Index Top-10 List, a ranking of the 10 nations with the strongest overall reputation: 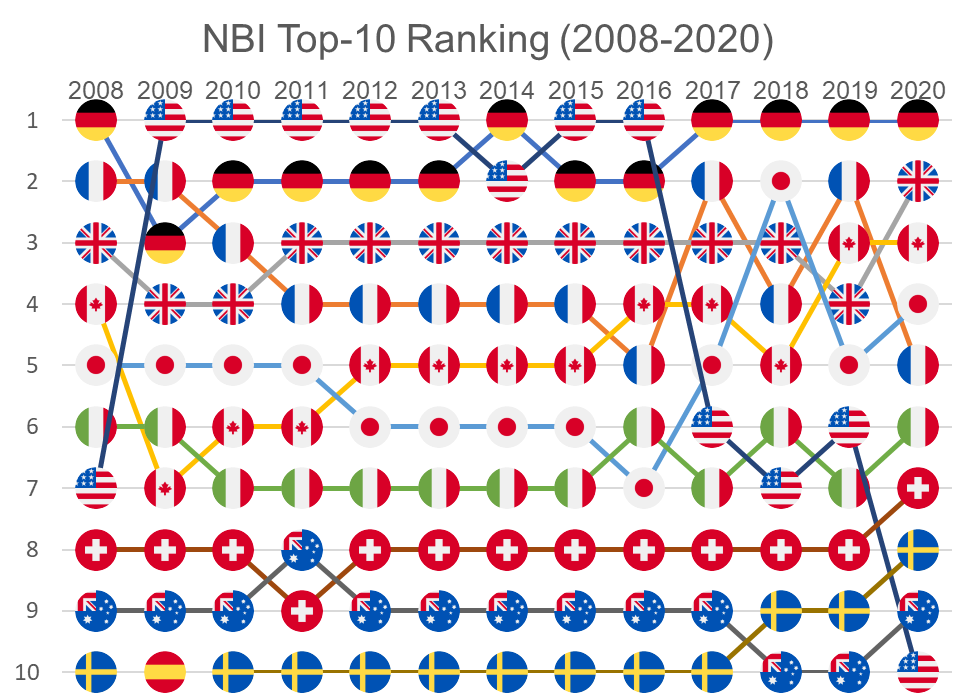 The intention of our program is to empower nations around the globe with informed research so that they can effectively manage their reputational strengths and weaknesses to ultimately promote their brand in an impactful manner.

However, an unintended side effect of publishing ranking lists is that nations are inevitably pitted against each other; and it may be commonly assumed that for a nation’s reputation to improve, the reputation of others must decline. But what if that wasn’t necessarily the case?

NBI data show that opinions about countries are not shaped in a vacuum. An analysis of familiarity ratings by region reveals that there is minimal variation in familiarity levels of countries within each region: implying that perceptions about individual countries, more often than not, are informed and shaped by their region’s reputation.

Consequently, we also uncovered a “reputational halo-effect” where nations’ image are positively impacted by that of their neighbors’. A correlation analysis of NBI 2020 scores for all 50 measured nations reveals how reputational gains for one nation can have a positive effect on that of others: For example, in Africa, we noticed that Botswana’s NBI score is highly correlated to that of Kenya and Nigeria – implying that if Kenya or Nigeria’s NBI score increases, we can expect Botswana’s NBI score to increase as well.
While reputational clustering by region tends to be the norm, we also observed some notable inter-regional relationships, possibly caused by generalized attitudes about these nations’ economies: 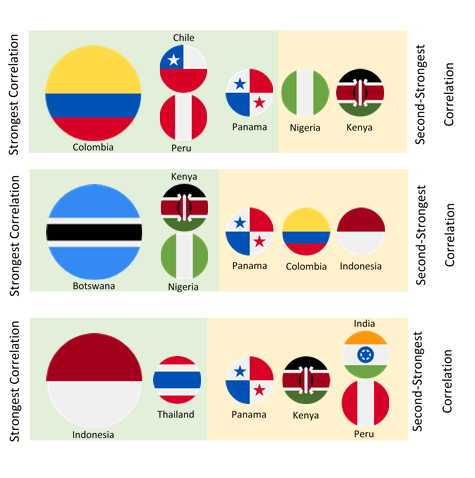 What these findings mean for nations working to further enhance their image is that:

Lastly, while regional collaboration should always be prioritized as part of this strategy, never write off possible inter-regional partnerships because of geographical or cultural differences. Nation branding can make for the strangest of bedfellows – explore these strategic opportunities to common advancement…they can generate a greater positive impact than imagined. Nations can work to increase their reputations without viewing the task as a zero-sum game. Building reputation does not have to come at the expense of others.

As we start to re-emerge from the COVID-19 pandemic, it is abundantly clear that the world we are coming into is not the same one we left in 2019. Moreover, the approaches to nation branding have also shifted considerably, and in an effort to adapt to the landscape NBI 2021 is implementing program upgrades to stay ahead of the curve – this year we are:

These program improvements will augment nations’ ability to manage their brands at this stage of the pandemic. Having an even greater understanding of current perceptions, in the global context and in these turbulent times, can help guide future communications and marketing efforts for greater likelihood of campaign success.