Toronto, ON, Sep 26, 2019 — Climate change is the third-most important issue of the campaign (26%, +1 point from last week), ranking behind only healthcare (37%, +2) and slightly behind affordability/cost of living (28%, +1) as being among Canadians top-three issues that will determine how they will vote on election day. Rounding out the top five are the economy (24%, unchanged) and taxes (24%, +2). This is according to a new Ipsos poll conducted on behalf of Global News.

Despite climate change moving into a position of relative prominence in Canada, many Canadians have vastly different views of how to handle the situation.

But when it comes time to put the money where their mouth is, nearly half (46%) of Canadians aren’t willing to spend anything more in terms of increased taxation or more expensive goods or services in order to help the fight against climate change, rising to a full majority (56%) of Conservative voters. Given these results, it bears repeating that affordability is the #2 issue of the campaign.

How much more would you personally be willing to spend per year (i.e. increased taxation, goods or services costing more, etc.) in order to help the fight against climate change? 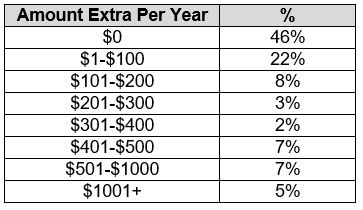 Canadians were presented with a series of statements about climate change and carbon pricing and asked to assess whether each was true or false. In many cases, Canadians admit to simply not knowing what the correct answer is, suggesting that a lack of information, or even misinformation, may be impacting people’s views on climate change

Please answer ‘True’ or ‘False’ to the following statements about climate change and carbon taxes.

Regardless of what they believe to be fact or fiction, eight in ten (78%) Canadians agree (30% strongly/49% somewhat) that Canada needs to do more than it is currently doing to address climate change – including 63% of Conservative voters. Moreover, just one in three (32%) agree (10% strongly/21% somewhat) that people who talk about climate change are overreacting, meaning that most (68%) disagree with this sentiment (37% strongly/31% somewhat).

Most (73%) Canadians also agree (24% strongly/49% somewhat) that Canada has an obligation to lead on climate change globally. In fact, just 27% agree (8% strongly/19% somewhat) that, since Canada is a relatively small contributor to the world’s pollution, there’s not much we can do to make a difference. Similarly, only 41% agree (10% strongly/31% somewhat) that no matter how hard we try, we won’t be able to significantly reduce carbon emissions over the next decade. Conversely, 59% disagree (18% strongly/41% somewhat) with this premise.

But change often comes at a price – or at least Canadians think so. A majority (54%) agrees (11% strongly/43% somewhat) that in order to combat climate change, the solutions will cause economic hardship in Canada. Conversely, nearly half (46%) disagree (7% strongly/39% somewhat) that this is necessarily the case.

It is also clearly a partisan, wedge issue. Three quarters (73%) of Liberal voters support the tax, falling steadily to 65% among Green voters, 60% among Bloc voters, 53% among NDP voters and 28% among Conservative voters.

Bloc (44%) and Tory (27%) voters favour rebates, while a plurality of Green (35%) and Liberal (33%) voters support the funding of green-research initiatives. NDP voters equally favour research (30%) and retraining of workers (31%) in the transition away from fossil-fuel production.

Regardless of what specific actions they want taken, most (81%) Canadians agree (30% strongly/51% somewhat) that they would be more supportive of a carbon tax if they knew the money collected was going directly to initiatives to combat climate change. Among those who initially said that they opposed a carbon tax, 71% say that if funds went to fighting climate change, they’d be more supportive.

Canadians were asked to consider which aspects of climate change and the environment they’d most like the next federal government to focus on. Reflecting on their top-three areas of priority, nearly half (47%) believe that taxing businesses that produce too many carbon emissions is a priority, while 45% think that reducing the use of single-use plastics in Canada is a priority. Others believe that incentivizing businesses to produce less carbon (35%) or diversifying the economy away from carbon-producing industries (34%) is the ticket.

One in three (31%) believe that one of the best courses forward is to incentivize consumers to change their behaviour, while 23% think the focus should be on helping people find jobs in non-carbon-producing industries. Relatively fewer want the next government to focus on better protecting Canada from natural disasters (15%) or taxing consumers that consume too much energy (15%). Just 2% think some other area of focus should be priority, while 6% of Canadians don’t believe any of these should be a priority for the incoming government.

These are some of the findings of an Ipsos poll conducted between September 20 and 23, on behalf of Global News. For this survey, a sample of n = 1500 Canadians aged 18+ was interviewed online via the Ipsos I-Say panel and non-panel sources. Respondents earn a nominal incentive for their participation. Quotas and weighting were employed to balance demographics to ensure that the sample's composition reflects that of the adult population according to Census data and to provide results intended to approximate the sample universe (weighting efficiency = 63.9%). The precision of Ipsos polls which include non-probability sampling is measured using a credibility interval. In this case, the poll is accurate to within ± 2.9 percentage points, 19 times out of 20, had all Canadians been polled. The credibility interval will be wider among subsets of the population. All sample surveys and polls may be subject to other sources of error, including, but not limited to coverage error, and measurement error. Ipsos abides by the disclosure standards established by the CRIC, found here: https://canadianresearchinsightscouncil.ca/standards/