In line with the belief that there is a funding gap, three-quarters (73%) of Canadians would support the federal government increasing provincial healthcare transfer payments by 6% each year instead of the change brought by the federal government in 2017 which limited the increase to 3% a year. Four in 10 (42%) would strongly support this decision and residents of the Atlantic region and Saskatchewan/Manitoba show the highest levels of strong support (Atlantic 54%, SK/MB 53% vs. BC 43%, QC 43%, AB 41%, ON 37%)

In terms of funding the increase in healthcare transfer payment growth to 6%, Canadians’ preferred sources of funding focus on large businesses. There is majority support for taxing large corporations operating in Canada (91%), cutting back on government bureaucracy (87%), reducing grants to large businesses (85%), and increasing corporate taxes (79%), all of which are more popular funding sources among older Canadians. Three quarters (76%) of Canadians also support taking funds from carbon taxes and distributing them to healthcare. Roughly 3 in 10 Canadians support an increase in federal deficit/debt (33%) or a reduction in federal services (28%) as a source of funding but this support is higher among younger Canadians. Less than a quarter (22%) of Canadians would support paying more in personal federal taxes to fund the increase in healthcare transfer payments. 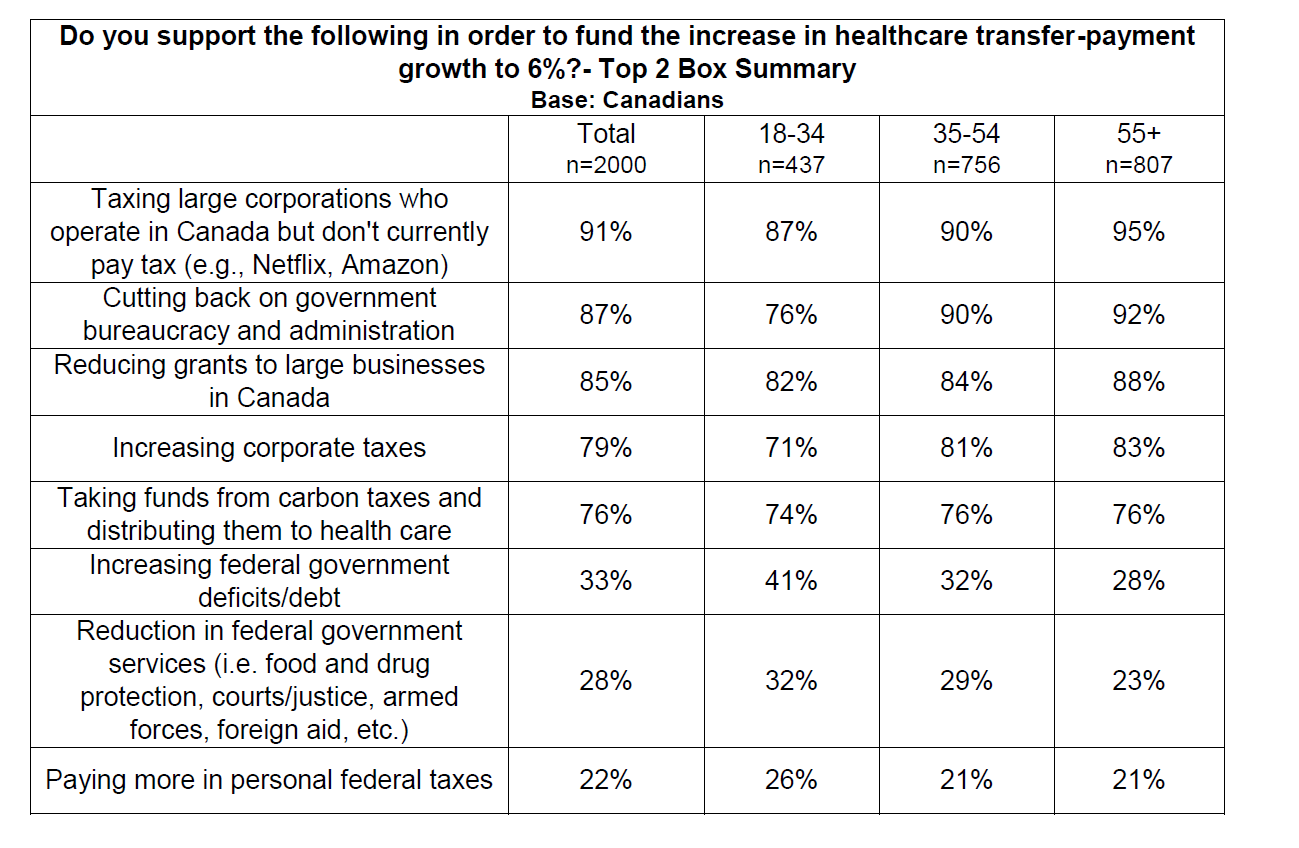 These are some of the findings of an Ipsos poll conducted between October 8th to 15th, 2019, on behalf of the Schroeder Policy Group. For this survey, a sample of 2000 Canadians aged 18+ was interviewed. Weighting was then employed to balance demographics to ensure that the sample's composition reflects that of the adult population according to Census data and to provide results intended to approximate the sample universe. The precision of Ipsos online polls is measured using a credibility interval. In this case, the poll is accurate to within ± 2.5 percentage points, 19 times out of 20, had all Canadians aged 18+ been polled. The credibility interval will be wider among subsets of the population. All sample surveys and polls may be subject to other sources of error, including, but not limited to coverage error, and measurement error.