Toronto, ON - Four of the top five most trusted professions in the eyes of Canadians reside within the health care sector, while firefighters top the list of forty-one professions to come out as Canada's most trust profession studied, according to a new Ipsos Reid poll conducted on behalf of Postmedia News and Global Television. Nearly nine in ten (88%) Canadians say they trust firefighters, scoring them a 5, 6, or 7 on a trust scale of 1 to 7. Following closely are emergency medical technicians (86%), nurses (85%), and pharmacists (78%). Rounding out the top-five spots are doctors, who are trusted by 75% of the population.

In total, forty-one professions were tested across two polls taken in December 2011 and June 2012, and some new faces appeared amongst the bottom-five. Telemarketers (3%) overtook car salespeople (6%) as Canada's least trusted profession. Other new faces to the bottom-five included bloggers (9%), psychics (9%), and advertising executives (8%).

In general, trust in most professions has declined in the last five years. However, trust in financial advisors (-13 points) and the police (-12) showed the biggest drop of any professions since 2007, likely due in part to the 2008 financial crisis and the publicity of police corruption scandals and criticism with how the police dealt with protests and riots that have occurred in the last number of years in cities such as Vancouver, Toronto and Montreal.

Inversely, Canadian soldiers (+9 points) saw the largest gains in public trust, while journalists (+5), local politicians (+5), national politicians (+3), and plumbers (+1) round out the only professions that have made gains over the past five years.

Below is a list of all professions studied, along with tracking back to an identical poll conducted five years ago, where applicable: 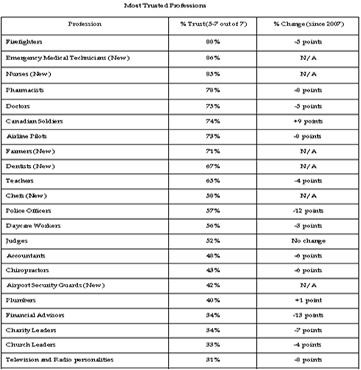 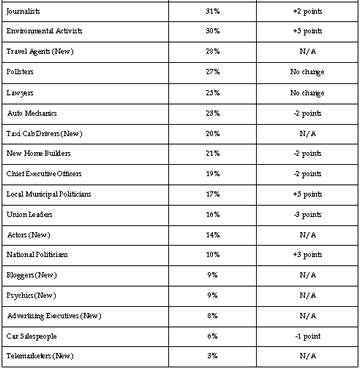 These are some of the findings of two Ipsos Reid polls conducted between December 14 and 19, 2011 and May 28 and June 4, 2012, on behalf of Postmedia News and Global Television. For this survey, samples of 1,021 and 1,007 Canadians from Ipsos' Canadian online panel was interviewed online. Weighting was then employed to balance demographics to ensure that the sample's composition reflects that of the adult population according to Census data and to provide results intended to approximate the sample universe. A survey with an unweighted probability sample of this size and a 100% response rate would have an estimated margin of error of +/- 3.1 percentage points, 19 times out of 20, of what the results would have been had the entire population of adults in Canada been polled. All sample surveys and polls may be subject to other sources of error, including, but not limited to coverage error, and measurement error.

Ipsos Reid is Canada's market intelligence leader, the country's leading provider of public opinion research, and research partner for loyalty and forecasting and modelling insights. With operations in eight cities, Ipsos Reid employs more than 600 research professionals and support staff in Canada. The company has the biggest network of telephone call centres in the country, as well as the largest pre-recruited household and online panels. Ipsos Reid's marketing research and public affairs practices offer the premier suite of research vehicles in Canada, all of which provide clients with actionable and relevant information. Staffed with seasoned research consultants with extensive industry-specific backgrounds, Ipsos Reid offers syndicated information or custom solutions across key sectors of the Canadian economy, including consumer packaged goods, financial services, automotive, retail, and technology & telecommunications. Ipsos Reid is an Ipsos company, a leading global survey-based market research group.