Calgary, AB, September 22, 2020 — A new national poll of 4,038 Canadians conducted across Canada by Ipsos on behalf of the Canadian Association of Petroleum Producers (CAPP) finds strong agreement that Canada’s oil and natural gas industry must be part of the economic recovery from the COVID-19 crisis.

Canadians see the country’s economic recovery as the top issue (44%) the federal government should focus on in the upcoming Speech from the Throne, which kicks off a new session of Parliament later in September. Economic recovery was followed by health care – including COVID-19 (36%), and ensuring we can produce what we need in Canada (29%). Deficit reduction was ranked as the fourth top priority for Canadians (20%), and a reduction in personal taxes rounded out the “top five” at 17%. Of the top five priorities for Canadians all were related to economic issues except health care. Canadians were given a list of possible Speech from the Throne priorities and were asked to pick their top three. As a result, totals exceed 100%.

With Canadians fixated on economic recovery as the top priority, it wasn’t surprising that the poll found 75% of Canadians ranked Canada’s current economic condition as somewhat or very bad. Only one in three rated the overall state of Canada’s economy as “very good” (3%) or “somewhat good” (26%). Canadians rated confidence in their provincial economy only marginally better, with 3% rating the overall state of their provincial economy as “very good,” and 30% rating it as “somewhat good.”

Furthermore, Canadians do not believe jobs should be sacrificed as part of the economic recovery. More than half disagreed with losing jobs in either the oil and natural gas sector (52% disagreed) or the manufacturing (57% disagreed) sector if it means having a green recovery in Canada. In both sectors, around two in ten did not know enough to say.

Seven in 10 felt that Canada can achieve its climate change goals while also growing the economy and close to two in three (63%) of Canadians say the oil and natural gas industry should be encouraged to continue to grow if it has a plan to fight climate change.

A plurality of Canadians felt that the economic recovery should be approached with prudence (42%) over an opportunity (38%) to make significant government investments and major changes to the economy. Just over two in ten (22%) did not know enough to say.

“These results show that Canadians are concerned about economic issues, first and foremost. They want to see government focused on the recovery, and they clearly see sectors such as Canadian oil and natural gas as part of that recovery. The results show they believe we can grow the economy, and still take action to protect the environment.” Darrell Bricker, CEO, Ipsos Global Public Affairs 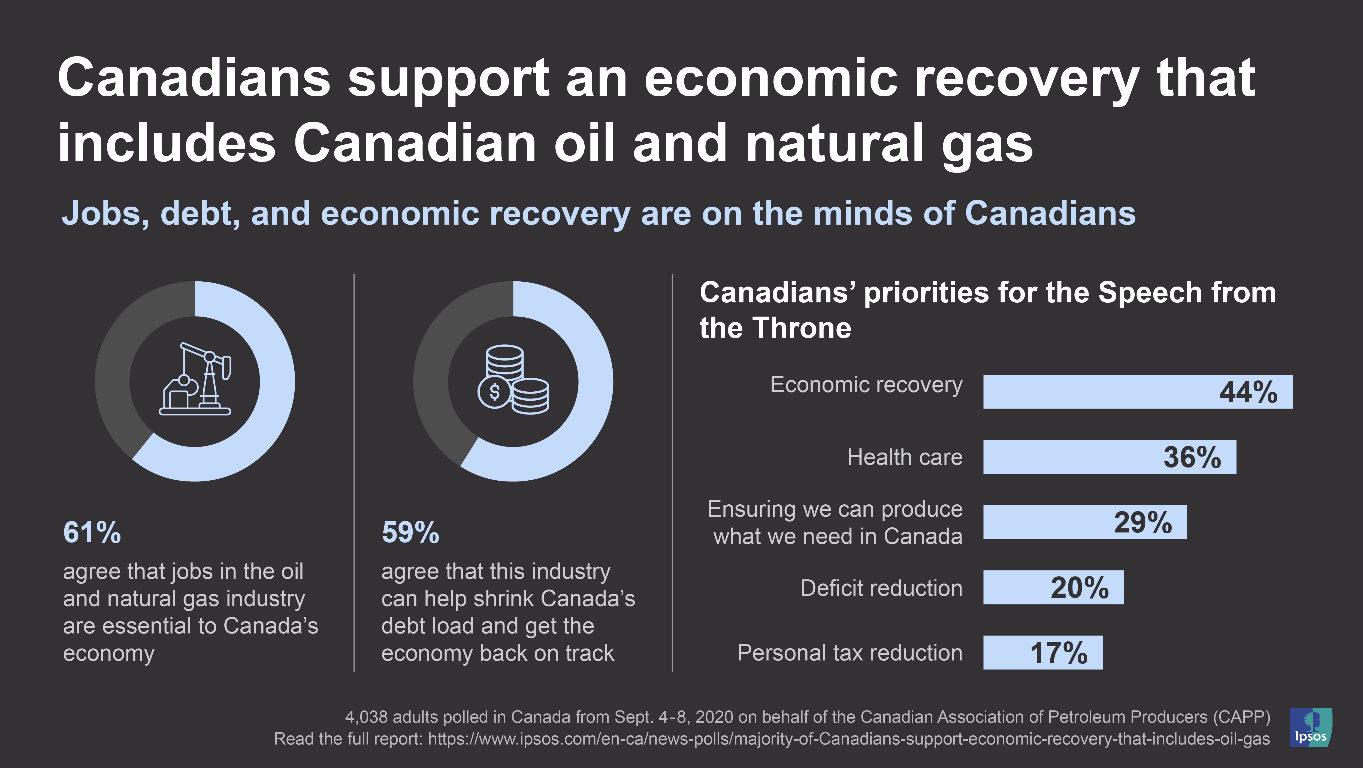 These are the findings of an Ipsos poll conducted between September 4 and 8, 2020, on behalf of the Canadian Association of Petroleum Producers (CAPP). For this survey, a sample of 4,038 Canadians aged 18+ was interviewed online using Ipsos’ partner panels. Quotas and weighting were employed to ensure that the sample’s composition reflects that of the Canadian population according to census parameters. The precision of Ipsos online polls is measured using a credibility interval. In this case, the poll is accurate to within ± 1.8 percentage points, 19 times out of 20, had all Canadians aged 18+ been polled. The credibility interval will be wider among subsets of the population. All sample surveys and polls may be subject to other sources of error, including, but not limited to coverage error, and measurement error. Discrepancies in or between totals are due to rounding.