Toronto, ON - As the transgender bathroom debate continues to play out in the media as a result of a proposed North Carolina law that would limit transgender access to bathrooms, three in ten Canadians (30%) say that people should be permitted to use the washroom of the gender they identify as, while another 34% are indifferent on the issue, according to a new Ipsos poll conducted for Yahoo. Only 15% say that people should be required to use the washroom of the gender they were assigned at birth (the desired goal of the North Carolina bill), while 16% say there should be a third category of washroom specifically for people who identify as transgender, and 5% prefer some other option.

Opinions are similar when it comes to the use of public changing facilities such as locker rooms. One in four Canadians (26%) say people should be permitted to use the facility of the gender they identify as; 15% say they should be required to use the facility of the gender they were assigned at birth; two in ten (19%) say there should be a third category of change room for transgender people; and 6% prefer some other option. Once again, one in three (34%) Canadians say they don't care one way or the other. In other words, opinions are roughly the same in Canada regardless of whether the debate is about public washrooms or public change rooms.

LGBTQ Issues Personally Important to Half (55%) of Canadians

Two issues facing Canadians in the LGBTQ community are safety and support in the communities they call home. In both instances, LGBTQ Canadians are significantly less at ease than those who do identify as straight:

Discrimination a Reality for LGBTQ Canadians...

The poll also asked Canadians the extent to which they agreed or disagreed with a variety of statements related to sexual orientation, gender identity and LGBTQ issues in Canada. On the topic of discrimination, Canadians in the LGBTQ community have plenty to report. One in three (35%) LGBTQ Canadians agree (7% strongly/28% somewhat) with the statement `I often face discrimination based on my gender,' compared to 17% of straight Canadians (3% strongly/14% somewhat). Women (23%) are also significantly more likely to agree (4% strongly/19% somewhat) they often face gender-based discrimination than men (14%; 3% strongly/12% somewhat).

At three in ten (28%), LGBTQ Canadians are also more likely to agree (5% strongly/23% somewhat) with the statement `I often face discrimination based on my sexual orientation,' compared to just 8% (2% strongly/6% somewhat) of those who identify as straight.

Canada Seen by Many as a World Leader on LGBTQ Issues, But Community Says Not Enough Attention Being Paid

Despite this, many feel that these issues still don't receive enough attention in Canada. This is especially true of LGBTQ Canadians: six in ten (62%) agree (15% strongly/48% somewhat). By contrast, four in ten (40%) Canadians who identify as straight agree that these issues don't receive enough attention (7% strongly/33% somewhat). Asked if the quality of life for the LGBTQ community in Canada has improved over the last twenty years, an overwhelming majority feel that it has. Nine in ten (93%) LGBTQ Canadians agree (50% strongly/43% somewhat), as do nine in ten (92%) straight Canadians (32% strongly/60% somewhat). 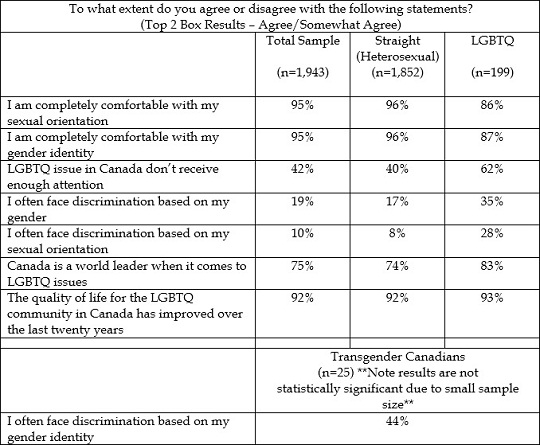 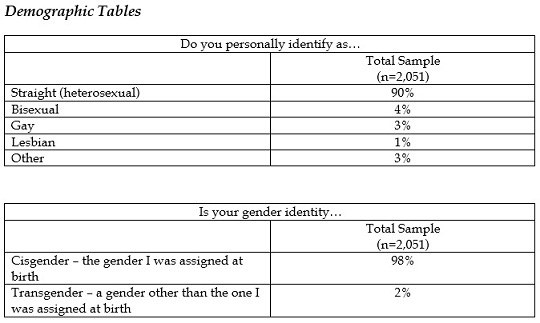 These are some of the findings of an Ipsos poll conducted between May 9 and May 11, 2016, on behalf of Yahoo. For this survey, a sample of 2,051 Canadians from Ipsos' online panel was interviewed online. Weighting was then employed to balance demographics to ensure that the sample's composition reflects that of the adult population according to Census data and to provide results intended to approximate the sample universe. The precision of Ipsos online polls is measured using a credibility interval. In this case, the poll is accurate to within +/ - 2.5 percentage points, 19 times out of 20, had all Canadian adults been polled. The credibility interval will be wider among subsets of the population. All sample surveys and polls may be subject to other sources of error, including, but not limited to coverage error, and measurement error.

About Ipsos in Canada

Ipsos is Canada's market intelligence leader, the country's leading provider of public opinion research, and research partner for loyalty and forecasting and modelling insights. With operations in eight cities, Ipsos employs more than 600 research professionals and support staff in Canada. The company has the biggest network of telephone call centres in the country, as well as the largest pre-recruited household and online panels. Ipsos' marketing research and public affairs practices offer the premier suite of research vehicles in Canada, all of which provide clients with actionable and relevant information. Staffed with seasoned research consultants with extensive industry-specific backgrounds, Ipsos offers syndicated information or custom solutions across key sectors of the Canadian economy, including consumer packaged goods, financial services, automotive, retail, and technology & telecommunications. Ipsos in Canada is an Ipsos company, a leading global survey-based market research group.

Visit ipsos.com to learn more about Ipsos' offerings and capabilities.