Out of a sudden, the non-mainstream post-1990 generation are now growing up. In the past, they were remembered as the people who spoke a Martian language. The new generation wants control over their own world. They just can't sit in the back of the car. They want to have their hands on the steering wheel. They want their own life of mobility.

With the rise of the new car purchasing group, auto consumption features more and more "young elements". The key automakers are now catering to the tastes of the post 90 persons and have launched their own strategies aimed at attracting young people. From Miller’s Cruz "Breaking Boundaries" commercial to Kim Soo Hyun's appearance at IX24 auto show and Toyota’s GETGOING global branding campaign, the automakers have spared no effort in understanding the fashion trends of the post-90s.

In 2015, more than 21 million passenger cars were sold in China, up 7% from the previous year. All of a sudden, the post-1990 generation is now growing up - and buying cars.

The post-90s are spendthrift in purchasing cars

Most of the post-90s have gotten work recently and are yet to strive for their financial freedom. On car purchases, there are a large percentage of them who ask their family for money.

On car consumption, it seems that the post-90s do not become hesitant because of the factor of "price".

It is always said that youth is just around you. If possible, imprint youth on your car body. Compared with the post-80s who care more about performance/price ratio, reliability and comfortable driving experience, the post-90s purchase cars to “impress others". They like classy car models with fashionable design and beautiful appearance.

Besides the “classy appearance" requirement, the post-90s also pay much attention to the “internal” aspects of the cars. Generally, the SUVs are still the most liked car model among the post-90s. Compared with the post-80s, the post-90s like hatchbacks more. They like fashionable, cutting-edge yet mature, steadfast and generally sporty style cars.

Besides, the post-90s want to send out a personal message to the people around them through their own cars. The technology-savvy post-90s have a stronger demand on in-car hotspot WiFi than the post-80s. What's worth noting is that, nearly 90% of the post-90s say they will consider purchasing new energy cars on environmental and economic grounds.

According to the survey on "brands of consideration for future car purchases”, the German cars are most liked by the post-90s. 69% of the post-90s will first choose European cars, followed by Chinese cars (47%), Japanese cars (43%) and American cars (44%). 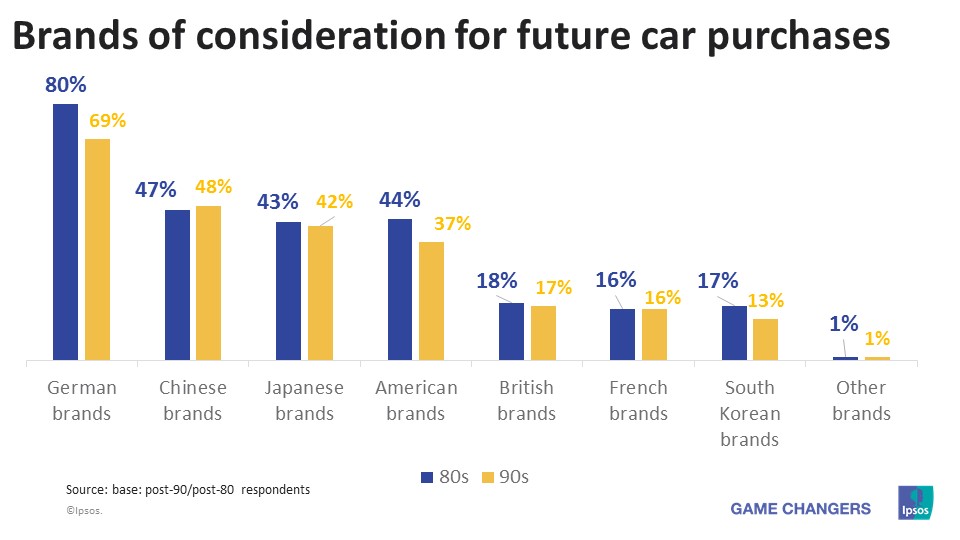 Online car purchase will become the choice of the post-90s

The impact of the internet on the post-90s is significant. As the "aboriginals of the interne", more than 60% of the post-90 respondents say they consider internet sources when purchasing cars, especially the specialized auto e-commerce websites. This is undoubtedly good news for companies focused on auto marketing business. Compared with the post-80s, the post-90s have a stronger reliance on the internet, as well as stronger desire and trust for online shopping. Online car shopping perhaps will become another trend in the future. 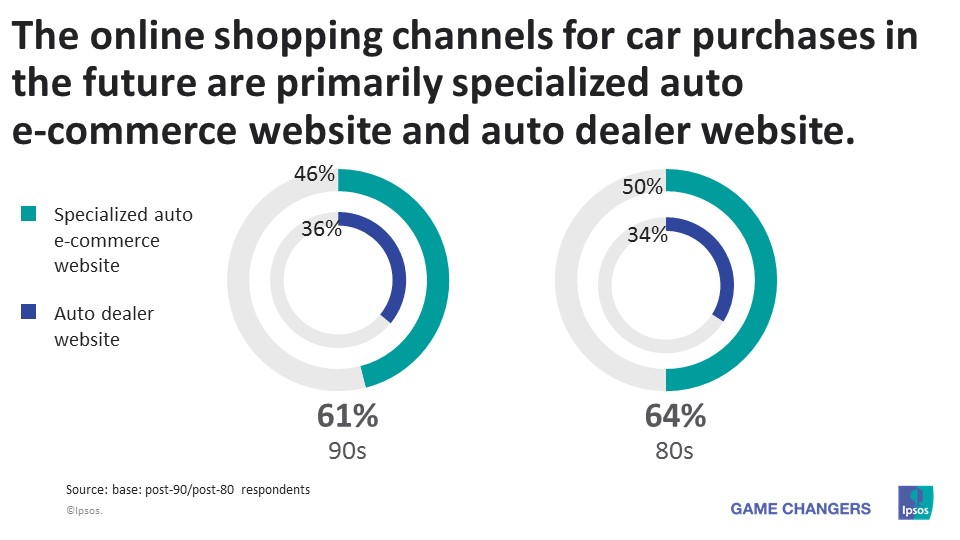 Compared with the post-80s, the newcomer post-90s are associated with many unusual labels. However, according to our research findings, the post-90s also make plans before taking actions, just like the post-80s. They want to keep a balance between work and family. They also like experiencing new things. Although they are fond of music, they will make a stop of their car if needed. This is the image of the post-90s. They have their own personality and illustrate their attitudes through their cars.