The News18 exit poll survey was conducted by Ipsos in India, who once again proved that in 2019 general election and stood out as one of the most accurate agencies in predicting different key aspects of the poll.

Here is a comparison of predictions from different pollsters on three key indicators (seat predictions for NDA, UPA and Others) and how much each deviated from the actual: 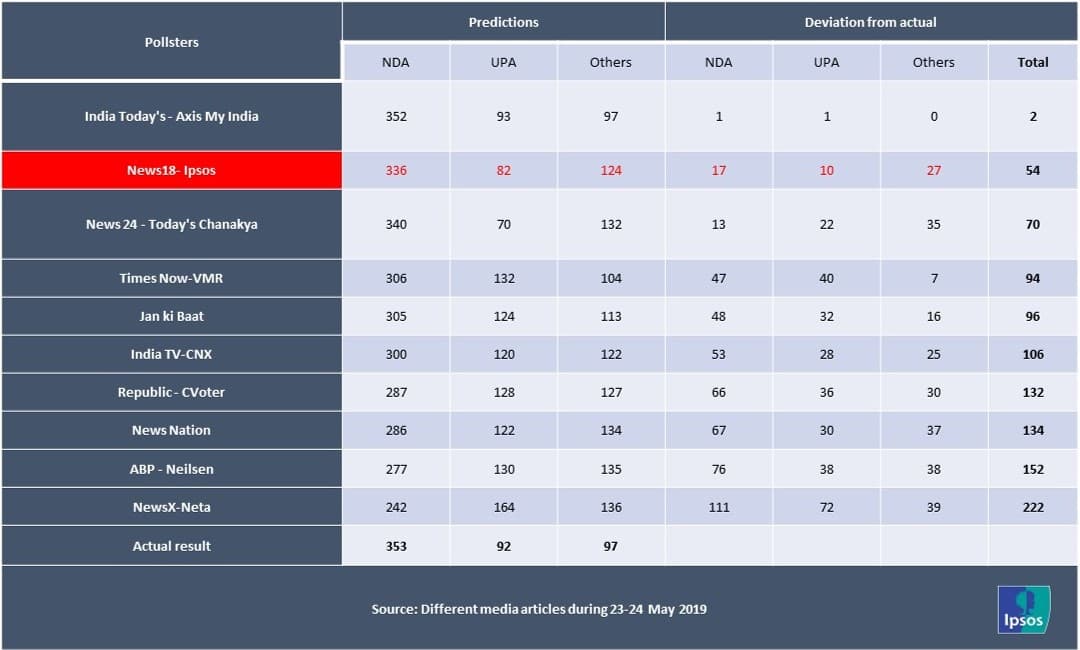 The agency names are sorted as per their accuracy level i.e. the least to max total deviation (in the last column). It clearly shows that Ipsos has been one of best on accuracy and is in fact in second position, in the pecking order of accuracy. Apart from the accuracy in seat prediction, Ipsos was also bang-on in predicting vote share. Ipsos predicted the NDA vote share as 48.5% and the provisional data shared by EC also confirms that actual vote share of NDA is 49%.

Ipsos had a very detailed and meticulous plan to make it a success, in each of the three critical stages, i.e. Planning, Execution and Analysis.

This is the most crucial stage to set things right at the first place. Ipsos’s rich global experience of conducting political polling in different countries of varied complexities across the world was leveraged to ensure nothing is left on chances. Scientific sampling was a crucial building block of success.

All plans were meticulously followed. It was a pure exit poll methodology -  some agencies mixed it with shortcuts like post-poll, online, telephonic, mobile app etc. and called their work as exit poll – which technically did not adhere to the framework of a conventional exit poll.

The survey was conducted on the day of voting in all seven phases of the polling and on the voting day Ipsos had zeroed-in on pre-decided polling stations. This ensured that the voters were still in the same frame of mind after voting and no influence had happened.

All interviews were done using tablets. Power banks were provided to each interviewer to ensure that there was no compromise on time-location cluster sampling. The tablets were EVM simulated, so the respondents had the privacy to choose their option without any external interference from the interviewer or from tampering with the option. This ensured a free and fair data collection with no bias in response.

The massive interviewing exercise was done by Ipsos’s in-house data collection team, which is one of the largest field-teams in the country. The fieldwork was monitored from four regional control rooms and one national control room.

A team of about 35 Quality Control executives conducted concurrent quality checks on the interviews, before accepting or rejecting the data. Live monitoring, data on real time basis and GPS-enabled devices also ensured the quality of field work. In addition to this, learnings derived of every phase, were implemented in the next phase of election. Teams had pre-empted likely on-ground challenges and therefore, risk assessment and mitigation strategies were planned accordingly.

The data was then weighted by age, gender, religion and caste to make the sample representative of each parliamentary constituency. Further, we deep dived into the exit poll results with a detailed analysis of voter mood, trends, factors and mathematical models, to arrive at vote estimates and seat predictions.

The core research team of Ipsos travelled extensively in different parts of the country during these 5-6 weeks, which helped them in understanding the pulse and the underlying issues at different parts. Different possible biases, like Bradley effect (people not sharing honest data, due to social/ political reasons of embarrassment or fear), were also picked up during these visits and factored in during the analysis stage.

Ipsos had done trust surveys between November 2018 and March 2019. The insights provided Ipsos with a ready reference to understand the trends and come up with the right predictions. So, the five factors that have led to our accurate predictions, so close to actual outcome of the 2019 General Elections were - Meticulous planning, statistical rigour, high quality of data collection, sophisticated analysis techniques and in-depth knowledge of doing it across the world (as world renowned election pollsters, credited with high levels of accruracy).