New Delhi, Nov. 15, 2019: There is of late a huge global focus on Gender Equality, Diversity and Inclusion.

A global survey by Ipsos in partnership with the Global Institute for Women’s Leadership, Policy Institute, World Questions: What helps or hinders gender equality? - unlocks the key factors that help women get ahead; it is particularly interesting as it provides insights across all markets put together (at the global level) and by local markets.

What works for Indian women? Top factors that propel them forward are achievable on their own

And for global women?

What makes Indian men get ahead – we found out!

"The findings definitely challenge age old beliefs about what works for women and men. These findings provide insights to citizens as well as marketers – citizens, when they look at the hierarchy of priorities for elevation of status and a better life – and marketers, of how they communicate in their adverts – we see a bit of a disconnect between what is portrayed and what actually works for a better life," says Amit Adarkar, CEO, Ipsos India & Operations Director, Ipsos APEC  (Asia Pacific excluding China). 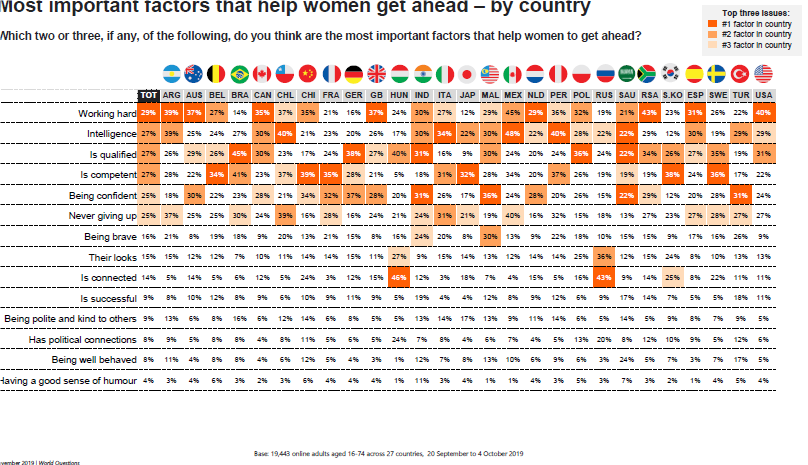 Interestingly, for global women, factors inhibiting their growth largely are to do with work policies: Employers not addressing gender pay gap (22%) is cited as the top global factor hindering progress of women. Others being, employers not helping women to balance work and care responsibilities (21%), employers not promoting women to senior positions (18%), lack of education for men and boys (17%), government not promoting equality (17%), men not helping achieve equality (15%) etc.

"Indian women largely either don’t work or are in the informal sector, where they get a short shrift. Lack of financial independence is the biggest stumbling block in their progress," added Adarkar.

Areas that have made most progress for Indian women – in achieving equality between men and women over the past 25 years.

Top factors that have greatly contributed in reducing inequalities between men and women are – women having equal access to education (44%), women having jobs in science and technology (36%), women being represented in govt and politics (35%), women’s participation in sport (34%), women having reached CEO/ board positions (33%), among others.

Next 25 years, what will work in further achieving gender equality?

"Women will further need to get into the male dominated bastions (power centres) to reduce the gap," added Adarkar.

The survey is an international sample of 19,943 adults aged 18-74 in the United States and Canada and 16-74 in all other countries. Interviews were conducted between 20 September and 4 October 2019.

Where results do not sum to 100 or the “difference” appears to be+-1 more/less than the actual, this may be due to rounding, multiple responses or the exclusion of don't knows or not stated responses.