The first International Women’s Day in the Netherlands took place in 1912. Since then, greater attention is given to the needs, interests and beliefs of women worldwide. This day is a focal point in the movement for women’s rights, on which important themes like economic independence and equal participation are subject for debate. The aim is equal treatment of women and men and equality of opportunity internationally. In the context of International Women’s Day, Ipsos conducted research on the global attitudes to gender equality. How does the world think about this topic today?

In collaboration with the Global Institute for Women’s Leadership at King’s College London and International Women’s Day, Ipsos conducted a new global study between 21st of December 2018 and 4th of January 2019. An international sample of 18,800 adults were interviewed about their attitudes to relevant topics concerning gender equality. Read a summary of the results below or download the full report.

Women then and in society today

Globally, half (52%) believe there are more advantages to being a man than a woman in society today. Just over one in ten (12%) believe that being a woman is more advantageous than being a man. Men are more likely to say there is no difference than women (30% compared to 22%). On the other hand, half of the people globally say that young women will have a better life than women from their parents’ generation. There is still a long way to go, but attitudes are changing. 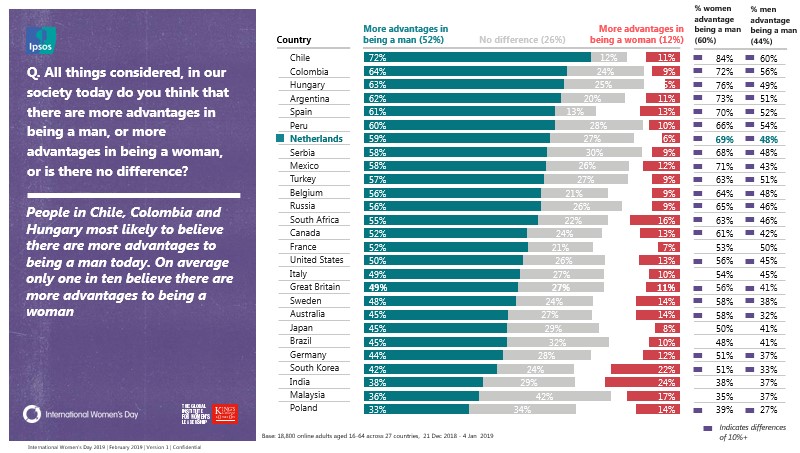 Two-thirds of people globally (65%) say that achieving equality between men and women is important to them personally - although this has fallen five points since last year (70%). In the Netherlands, a quarter say they would describe themselves as a feminist compared to a global average of 33%.

In most countries, childcare is no longer seen as the preserve of the woman; three-quarters globally (75%) disagree that a man who stays at home to look after his children is less of a man compared with just one in five (18%) agreeing. In the Netherlands, 90% disagree with the statement. Furthermore, three-quarters of people globally (75%) say they would be comfortable with having a female boss. One in five men would be uncomfortable with this, while 14% of the women share this opinion. The Netherlands is in the second-to-last place; only 8% say they would feel uncomfortable. 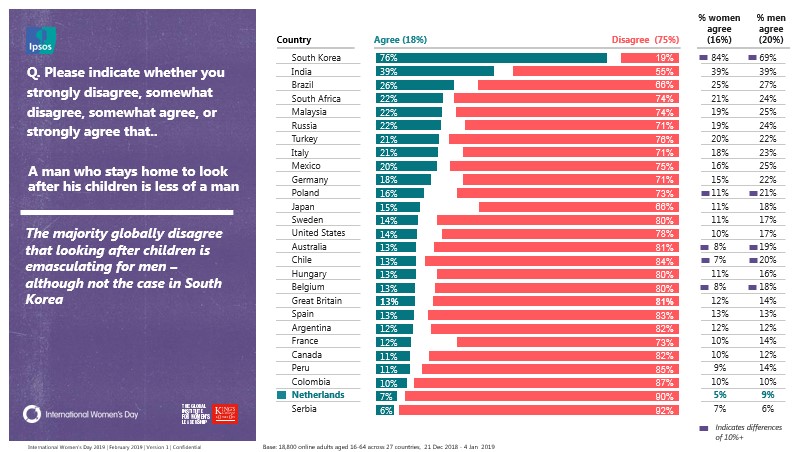 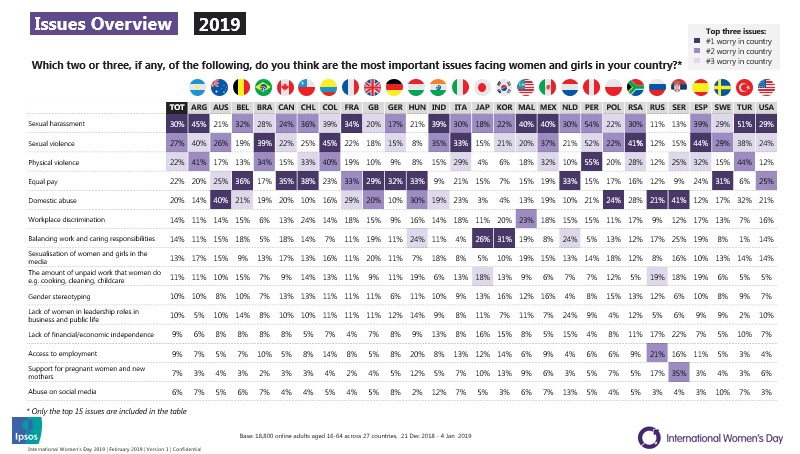 Globally, the top actions that people feel would help to achieve equality between men and women are employers paying women the same as men for the same work (36%) and tougher laws to prevent violence and harassment against women (35%). In the Netherlands, equal pay is picked out as an important action by 49% of the people. In most countries, women are significantly more likely than men to mention equal pay.

The prospects for gender equality

Education is the area where people think equality will be achieved first - close to half (47%) are confident that discrimination against women in education will have ended in 20 years’ time. Compared to other areas of life, the people in the Netherlands are most optimistic about discrimination in education (58%) being ended and least confident about this happening in the corporate world (47%) in the next twenty years. 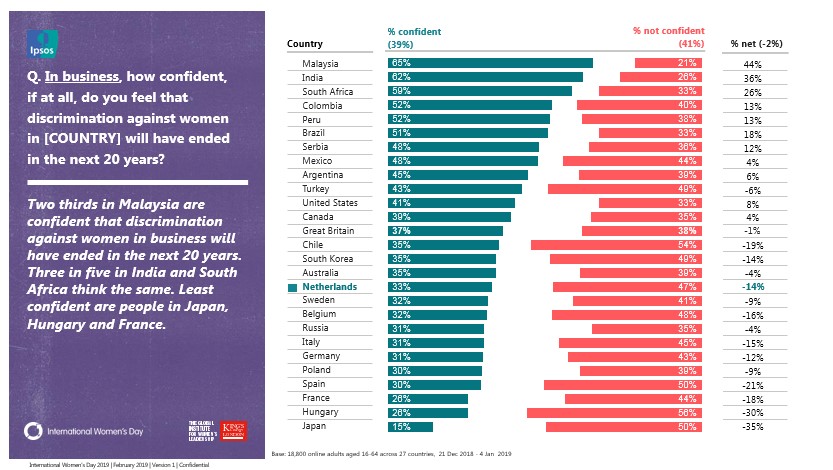 Gender equality is a fundamental human right, but there is still a long way to go to achieve full equality between men and women worldwide. Greater attention is given to the needs, interests and beliefs of women and to people all over the world who work for gender equality since International Women’s Day is brought to life. Here’s to women!