This past Wednesday was called “Super Wednesday” in South Africa, as citizens in 95 wards across 55 municipalities went to the polls to elect new councillors. Due to Covid-19 the IEC organised all the by-elections that were due in municipalities to happen on the same day, and altogether 44 candidates from 40 political parties participated.

At the time of writing, all results are not published yet and although these by-elections might be an indication of how the political wind blows currently, it will probably not be a strong indication of things to come in next year’s scheduled Local Government Elections.

Another view of the current opinions in the country can be found in an Ipsos poll conducted during July through to September 2020, using face-to-face and telephone interviewing methodologies (as allowed by the lockdown regulations). A total of 3,758 interviews were conducted with randomly selected South Africans, 18 years and older.  The results of the study are representative of the views of South Africans of voting age.

Respondents were asked which political party they would vote for if there were an election the next day - and they had a free choice to choose any political party. Half (50%) chose the ANC as their party of choice – a drop of 5 percentage points since the previous Ipsos Pulse of the People™ survey in November 2019. On the other hand, it seems as if support for both the DA and EFF slightly increased from November 2019.

For all three the biggest political parties in the country, the results from the next few Ipsos Pulse of the People™ studies, planned for the months before the next Local Government Elections, will be very interesting.1 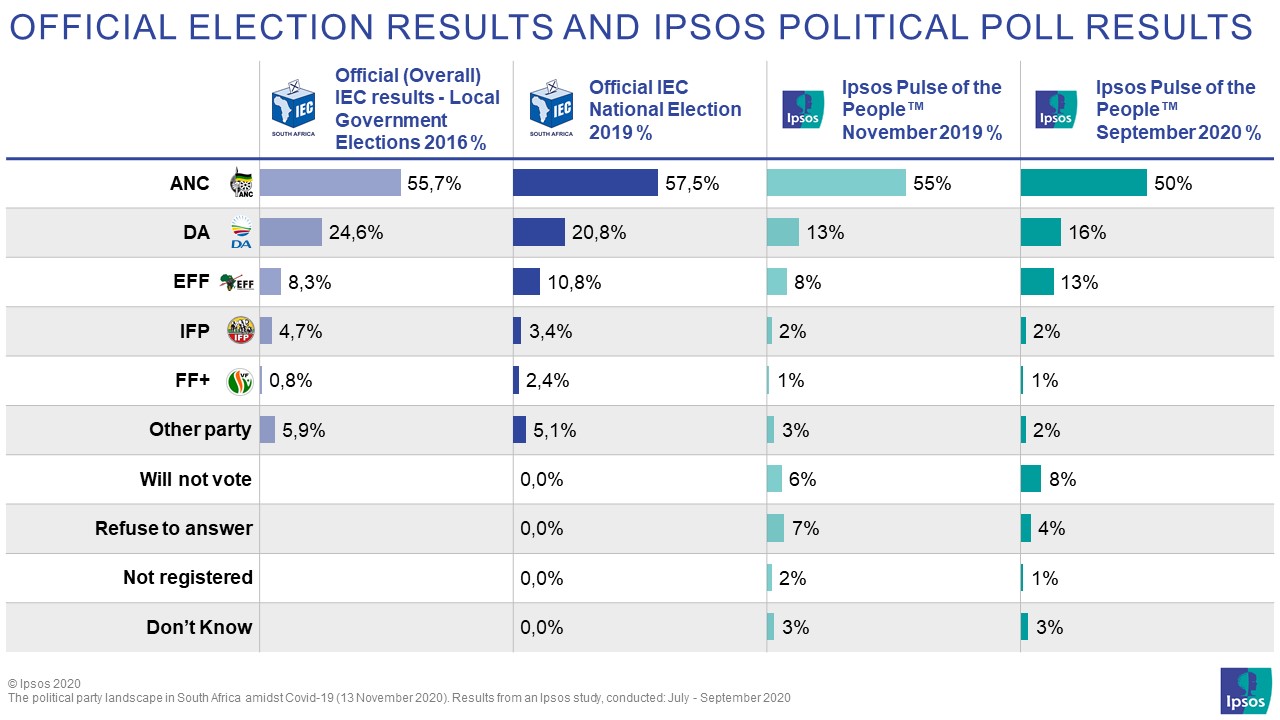 It is not that South Africa is home to an overwhelming number of pessimists, but almost three in every ten are either saying that they do not know what to think about the direction of the country or that they are undecided about the question. 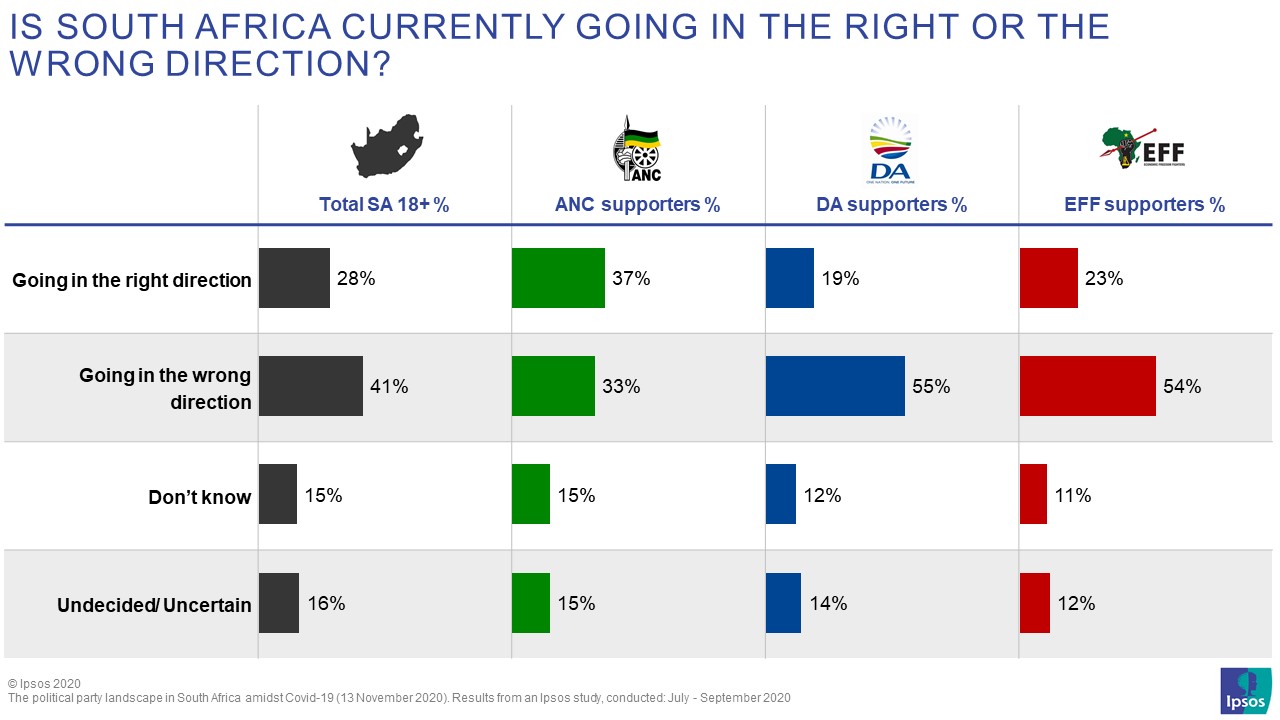 To add to the feelings of uncertainty, a third of South Africans (34%) felt that no single political party represented their views. This feeling was even prevalent amongst the three biggest parties in similar proportions, with the supporters of these parties indicating that they “Strongly Agree” or “Agree” that no current political party represented their views.2

Trust in political parties might be a key motivating factor in next year’s Local Government Elections, influencing the decision to decide to vote for a particular political party, but also influencing the decision on whether to vote at all. We have seen the number of voters who turn out to vote dwindle over the last few elections. This might have an influence on the legitimacy of the elections and opinions about whether the elections are free and fair, and expressing the will of the people.

To give some perspectives on these issues, respondents were also asked to indicate which party they would vote for as a SECOND choice if their first-choice party were not available for whichever reason.
(This will not happen in an election, as a voter will not be offered a second choice.) 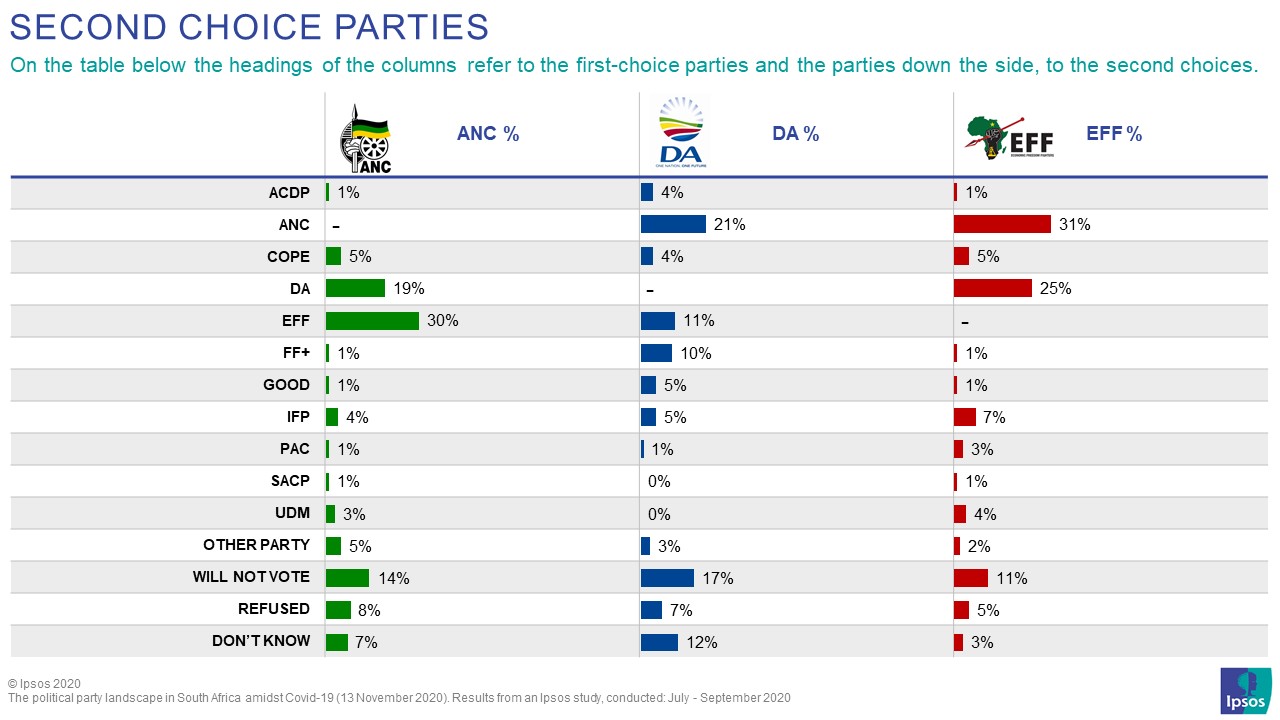 It is clear that all political parties have their work cut out for them before the Local Government Elections – eligible voters are uncertain, and party loyalty is relatively fluid.

1 To keep perspective, official IEC results from the 2016 Local Government Elections and the 2019 National Election are added to the table.

2 The question about party choice asked respondents to indicate which party they would vote for if there were an election the next day. Clearly all those that chose a certain political party are not necessarily devoted to that party.