In an online survey conducted by Ipsos South Africa in September 2020, 55% of SMME business owners stated that they experienced greater uncertainty around the sustainability of their businesses. A total of 724 Owners, CEO’s, MD’s and Directors of different SMME enterprises participated in this survey. We appreciate that every organisation has a different definition for the classification of SMME businesses into Micro, Small, Medium, and Larger Enterprises, and to simplify this, we have defined these splits using the annual turnover of the SMME businesses: 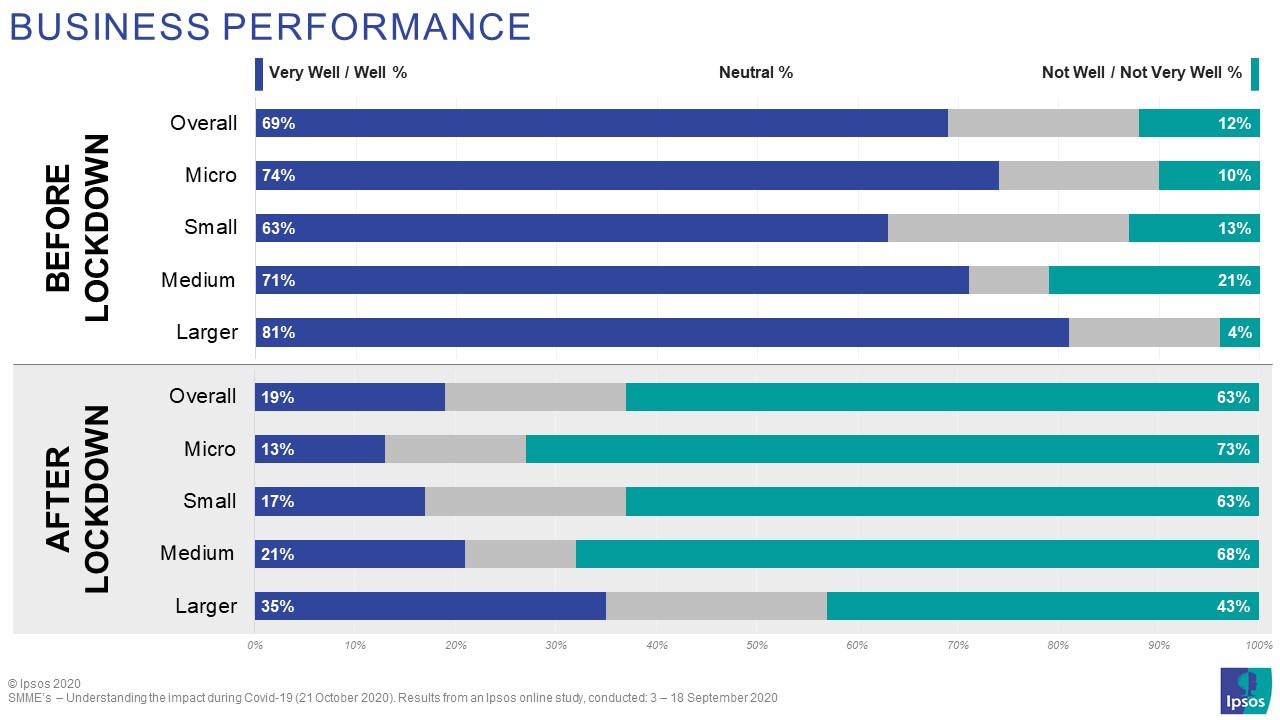 Almost four in every ten business owners (38%) estimate that it will take more than a year for their businesses to recover, whilst nearly three in every ten (28%) state that they do not know how long the recovery period will be, as things are still too uncertain. 8% of current business owners are convinced that their businesses will not be able to recover after the pandemic and that they are therefore considering closing their doors.

There are however some “green shoots”, and since the gradual lifting of lockdown restrictions almost half (49%) of business owners state that they have managed to bring in new orders or new business, but that it is much slower than what it used to be before the pandemic.

The business impact of the pandemic

Apart from customers spending less, more than four in every ten business owners (44%) also say that input costs from suppliers have increased and 16% have experienced an increase in crime. Interestingly, the larger the business the higher the proportion experiencing crime.

Still looking at the larger SMME businesses, a third (32%) experienced a disruption of logistics in running their businesses and 21% mentioned shortages of supplies and/or goods.

All these external factors have resulted in almost seven out of every ten (69%) SMME business owners registering cashflow problems. This is mainly attributed to a delay in client payments (37%), or clients simply not paying accounts (33%), as well as the unexpected additional PPE expenditure (32%).

All the changes contributed to the fact that about a third (31%) of SMME business owners were not able to pay employees’ salaries, with the result that a quarter (26%) had to let some employees go. Medium sized SMME’s were hit hardest, with 38% of these business owners saying they had to let staff go.

When asked what government or larger organisations could do to help make their businesses successful after the easing of lockdown, the top 2 mentioned items were:

Most business owners (54%) say they used their savings to keep businesses running and about one in every five (23%) applied for a loan during this time.

But what about the packages Government put in place?

When asked specifically about the support packages put in place by government during lockdown, the awareness levels varied depending on the package. 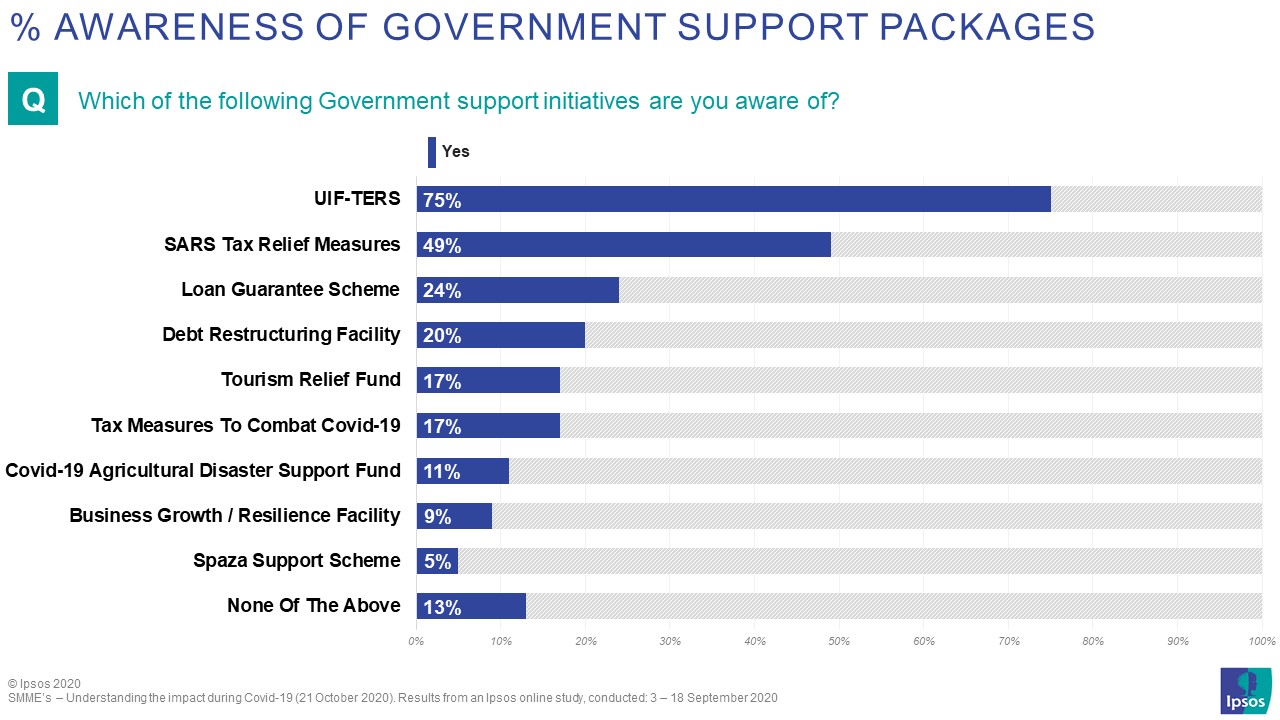 However, awareness did not necessarily result in actual applications, with a quarter (26%) of business owners stating that they did not apply for any of the available support packages, while almost two-thirds (63%) applied for the UIF-TERS fund, with 70% of those who applied, affirming that they did receive compensation.

So why did so many not apply?

Of those businesses that did not apply, a third of them say they did not know if their company qualifies, whilst 26% say that they found the process too complicated. Aside from the top two mentioned items (Support small businesses / shop local; Financial support / funding / investment), business owners also called out for government to:

Some of the remarks made by owners of SMME businesses on these 4 topics:

What changes have they made and what do they need for the future?

Some operational changes were made by SMME’s:

Four in every ten (42%) agree that the main lesson learnt from the pandemic is to have an emergency fund / savings for their business. Other lessons include operations optimisation (34%), employing fewer but more experienced employees (30%) and making use of e-commerce or selling online (17%).

Even though this sector still heavily relies on word-of-mouth (72%) for marketing, there has been significant shifts in terms of increased usage of digital platforms. The largest increase being in using websites (increased by 12% percentage points) comparing pre- to post-lockdown.

When asked what support they currently need for their business, the following 3 areas were called out as the top areas: