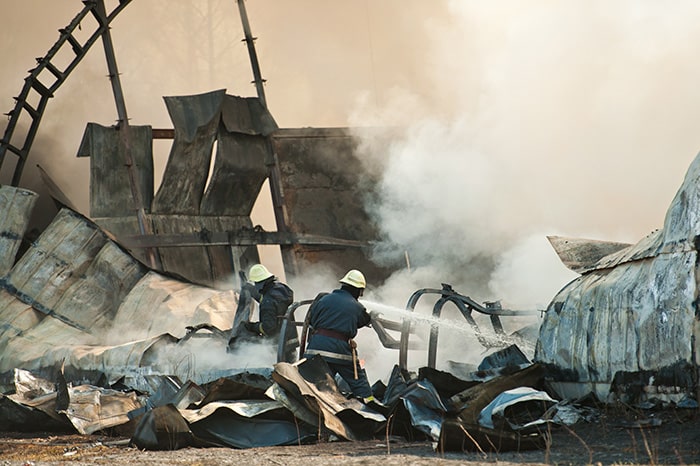 Benjamin Franklin once famously wrote “in this world nothing can be said to be certain – except death and taxes.” And while death is still certain, there seems to be a lot of confusion about how we die, according to our latest survey.

Sure, it’s morbid to think about, but do you know what are the biggest killers in your community, and how likely people are to die from them?

In a survey of 16,000 people across 32 countries, people on average tend to underestimate how many deaths are caused by diseases like heart disease, cancer and neurological disorders in their country, while they vastly overestimate how many people die from other causes like car crashes, violence, suicide, substance abuse and terrorism.

Cardiovascular diseases are the leading cause of death worldwide with almost one-third (32%) of people dying from this every year, according to the Institute for Health Metrics and Evaluation (IHME). But the average guess on deaths in all the countries surveyed was just 11%.

Cancer is the second biggest cause of death globally with a quarter of people (24%) dying from this each year – respondents thought the number of deaths is 15%.

About 9% of deaths occur from neurological disorders like Parkinson’s disease or dementia, but people guessed it was about half that at 5%.

On the other end, people think 10% of deaths every year are from transport injuries, when the figure is just 2%. People thought 8% of deaths are from violence and substance abuse like drugs and alcohol, but the actual number is just 1% a year globally. 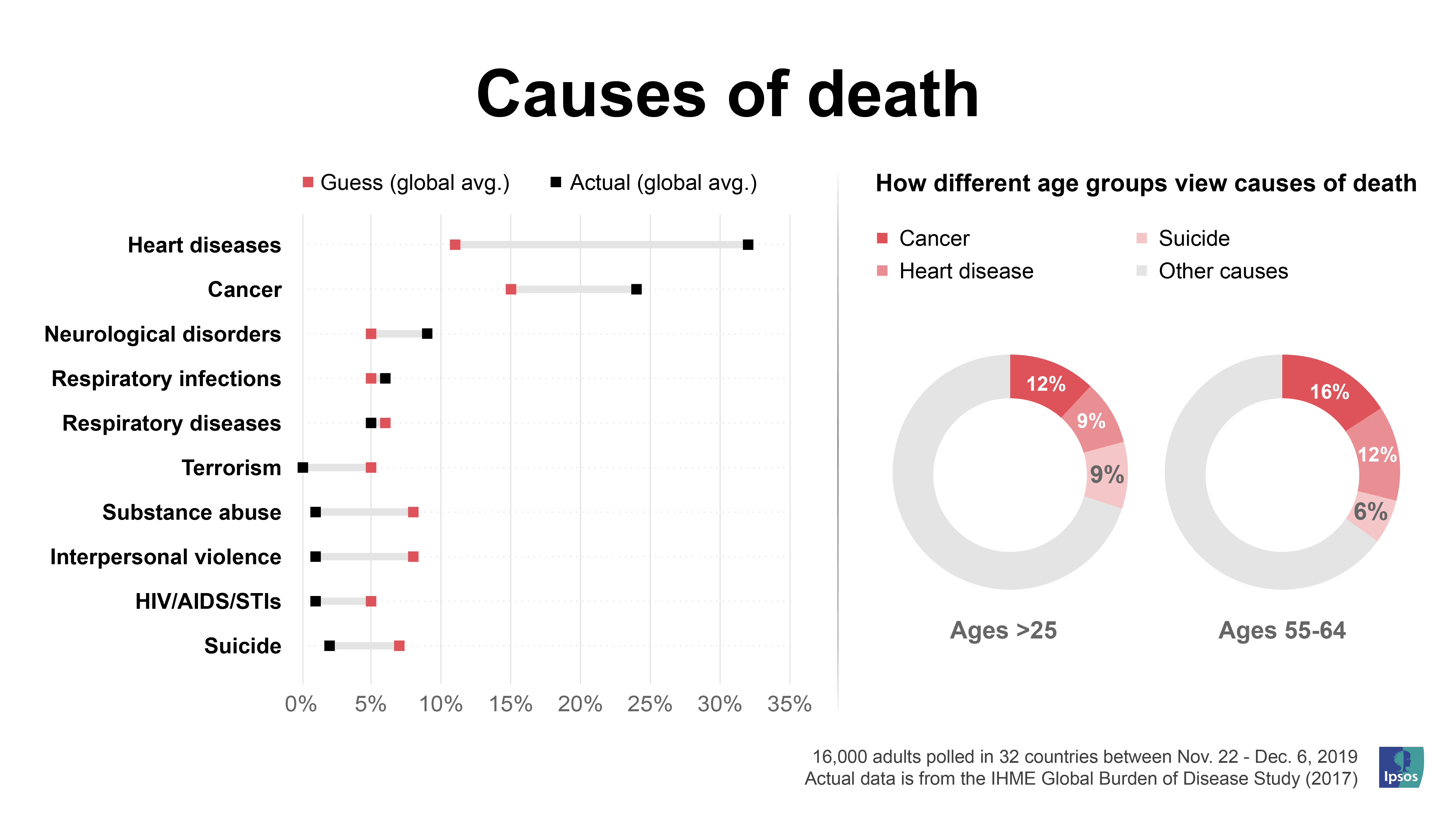 Experts say a combination of how the media reports on death, the dramatization of vivid scenes of death available to us, and the recency of such information – which may make it more salient or important – are influences affecting the way we think about dying.

What influences how we view death

Namika Sagara, President of our Behavioral Science Center in the U.S., said deaths from car crashes, gun violence and terrorism are usually very dramatic, and therefore people are likely to remember them more.

“These likely to come to mind more easily, and leads people to think it happens more often,” said Sagara. “This is related to availability bias.”

Sheldon Solomon, Professor of Psychology at Skidmore College in the U.S., backed this by adding that we tend to overestimate the frequency of events that are salient to us.

“We are more likely to die falling in our bathrooms than by being murdered by terrorists or in an airplane crash, but people probably never see news about someone falling in their bathrooms and dying,” said Prof. Solomon.

“Moreover, crashes, terrorism and violence are more immediate whereas high blood pressure and cancer happen more slowly over time such that we might underestimate their frequency as a result.”

More than a third of people surveyed said they see transport injuries such as accidents (38%), violence such as murder (37%), and terrorism and conflict (35%) most frequently in the news – the highest among all 14 causes of death. But the top three causes of death that the majority of people said they have been personally affected by are cancer (70%), heart disease (60%) and diabetes or kidney diseases (58%).

Dr. Theo Vos, Professor of Health Metrics Sciences at Institute for Health Metrics and Evaluation (IHME) in the U.S., also points out that average age at death by cause matters in how people guess as well.

“The ones that are grossly underestimated are those of oldest ages - cancer , cardiovascular disease, chronic kidney disease, while the causes that more often kill at younger ages - transport, violence, suicide, drugs and HIV/AIDS - are overestimated,” said Dr. Vos, a key member of the Global Burden Disease (GBD) research team.

“I suspect that the elderly will report cardiovascular disease, cancer, diabetes and chronic kidney disease more accurately as top causes in terms of numbers.” 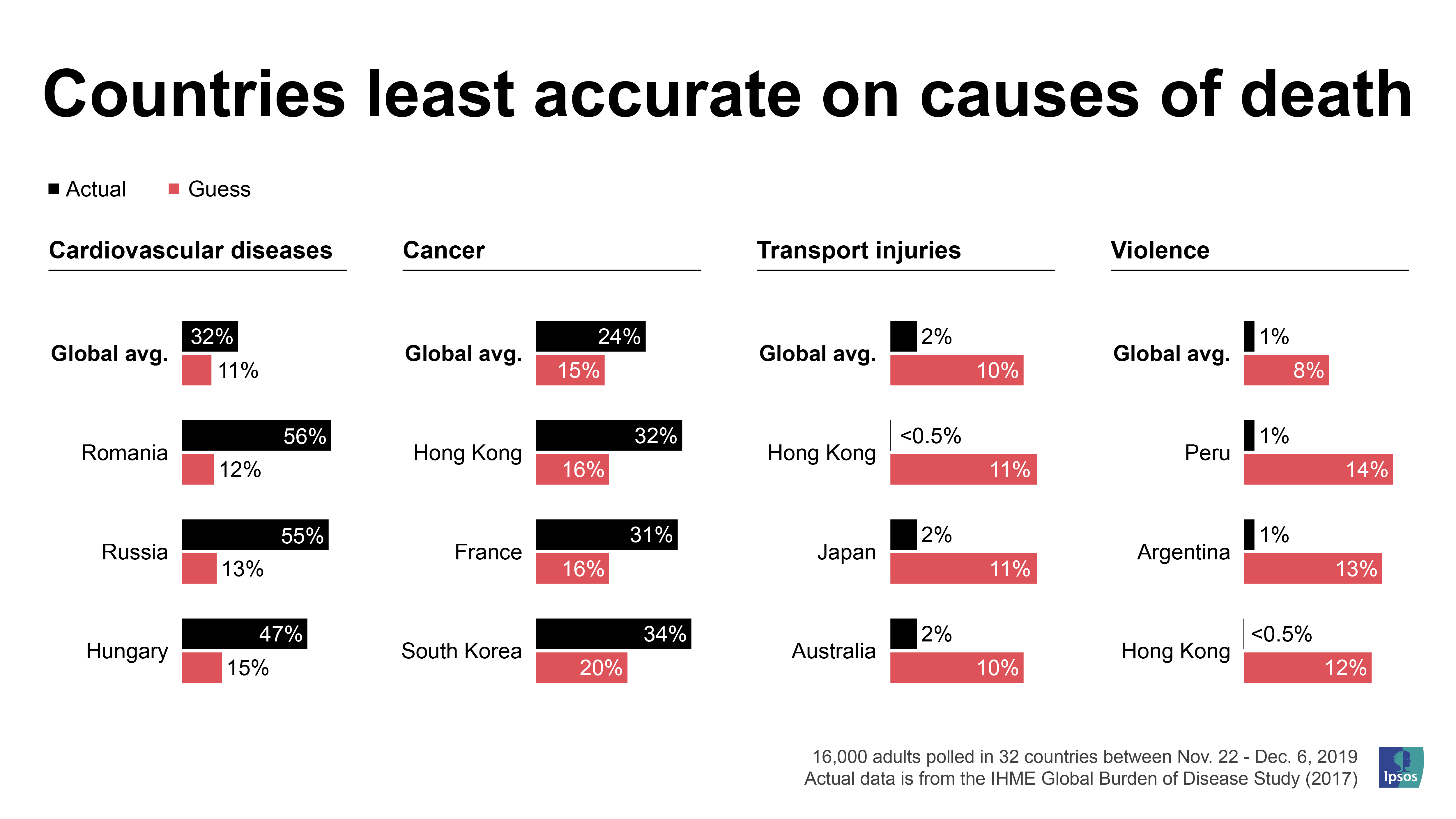 Prof. Solomon adds there’s also a psychodynamic element to how people think about death which could explain the misconceptions, because people’s view of themselves are biased to minimize the prospect of adverse outcomes.

“Given that heart attacks and cancer happen to individuals as a function of life-style choices - at least in part - my guess is that we underestimate the rate at which these problems occur in order to reduce the direct threat that they present to us as individuals.”

What’s wrong with not understanding risks

So, does it matter if people are bad at assessing risk and causes of death?

Experts say misconceptions about the risks of death could have much broader effects than people being cavalier about their lifestyle choices and understanding this can help us make better decisions.

Jonathan Jong, Assistant Professor at Coventry University in the UK and co-author of Death Anxiety and Religious Belief, said knowing the size of effects can help change behavior like people refusing to go on airplanes while eating loads of cheeseburgers.

“What I've found most helpful in explaining risks to people is to make comparisons. We say flying is X times safer than driving. Or X times more people die of heart attacks than shark attacks,” said Prof. Jong. “I think that sort of thing is more helpful that just expressing an absolute magnitude.”

Sagara agreed, adding that governments can create more intuitive messages that speaks to the “irrational” mind of people.

But Prof. Solomon also points out that it works in some governments favour to keep people fearing causes of death that are not killing as many people as they are led to believe.

“In a perfect and apolitical universe, ideally, we would have an accurate sense of the causes of death in order to allocate resources more efficiently and effectively,” said Prof. Solomon.

“But for the Donald Trumps of the world, it is imperative to keep people fearful of external enemies like immigrants and terrorists in order to maintain power, so it is highly unlikely that governments will convey accurate information about actual health risks lest there be an outbreak of common sense, and a focus on better healthcare and preventative medicine.”