Toronto, ON, September 28, 2019 — With the latest polling numbers showing the Liberals and Conservatives still within just a few points of each other in terms of voter intent, the outcome on October 21st may be riding on how those who are currently undecided choose to cast their ballot – if they decide to vote at all. Who are the undecided? Ipsos has taken a look at the past two waves of polling for Global News to get a better look at Canadians who are still making their minds up.

In all, one in ten Canadians (11%) who are eligible to vote say that if a federal election were to be held tomorrow, they don’t know who they would vote for. Some parts of the country have significantly more undecided voters than others.

When looking at regional proportions of voters who report that they are undecided, Quebec has the largest at 14%, followed by BC (11%), Atlantic Canada (11%), Alberta (10%), Saskatchewan and Manitoba (10%), and Ontario (9%). Despite Ontario having the largest number of undecided voters in absolute terms, when viewed as a percentage of the province’s population, it actually has the smallest proportion of voters who report having not yet made a decision about how they will vote.

Voter indecision also appears to be a nearly exclusively urban phenomenon: nearly nine in ten (86%) Canadians who don’t know who they will vote for are based in urban centres, including 73% residing in cities with populations of 100,000 or more.

Gender differences are at play among the 11% of Canadians who don’t yet know how they will vote: Two in three undecided voters (68%) are women, while one in three (32%) are men.

Education doesn’t seem to have an undue impact on Canadians knowing who they will vote for: within the 11% of voters who are undecided, nearly as many have a post-secondary education or higher (46%) as have a high school diploma or less (54%). However, Canadians who earn less are noticeably more likely to be undecided: half of all undecided voters (50%) report an annual household income of $60k or less, while only one in four (24%) have incomes above this level – including just 8% who have a household income of $100k or more. The remaining 26% of undecided voters chose not to report their income.

How Do They Feel About Trudeau?

Skepticism toward the Trudeau Liberals runs deep among the 11% of voters who are as yet undecided: a majority – six in ten (62%) disapprove of the Liberal government’s performance (27% strongly/35% somewhat), compared to 58% of Canadian voters overall. Two in three (66%) say it is time for another federal party to take over, leaving 31% who feel the Trudeau government has done a good job and deserves re-election, and just 3% who don’t know.

Undecided voters appear more forgiving in light of the Trudeau brownface photos that emerged last week. While most (85%) have seen or heard about the photos and video, more than half of undecided voters (56%) think that Trudeau’s apology is sufficient and that he should continue. This compared to just 45% of all Canadian voters who feel the same way.

One way in which undecided voters differ noticeably from Canadian voters at large is who they think would make the best Prime Minister of Canada. While the undecided (32%) are just as likely as the overall electorate (35%) to think Trudeau would make the best PM, they are far less likely to feel the same about Conservative leader Andrew Scheer. Less than two in ten (18%) feel that Scheer is best suited for the top job, compared to 31% of voters overall.

Who do the undecided feel more favourably towards? Green Party leader Elizabeth May. One in four undecided voters (24%) say May is their pick for best PM, ahead of NDP leader Jagmeet Singh (12%), People’s Party of Canada leader Maxime Bernier (8%), or Bloc Québécois leader Yves-François Blanchet (1%).

What Issues Do They Care About?

However, undecided voters are more likely to see taxes (24%) as an issue of importance than climate change (19%), while for voters at large, the pattern is reverse (26% say climate change is important to them, while 23% say the same about taxes). 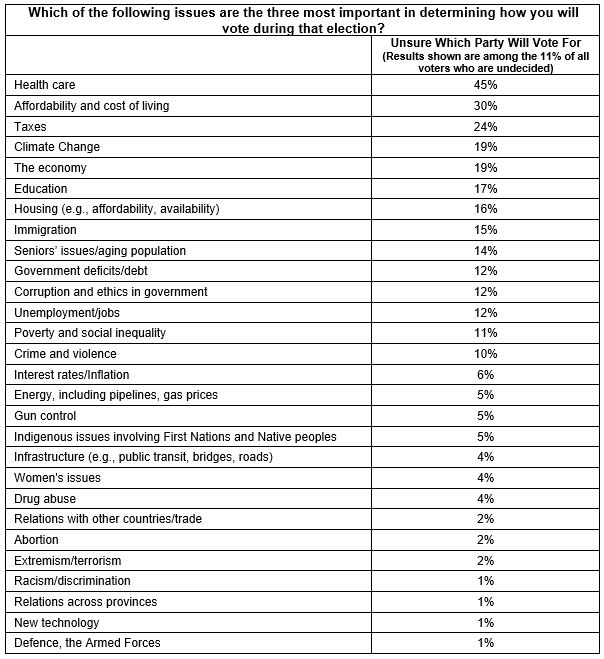