Toronto, ON, October 9, 2019 — Less than two weeks ahead of the federal election, the latest Ipsos poll conducted exclusively for Global News looks at the issues that will determine how Canadians will vote on October 21st, and the extent to which they have evolved (or not) since the campaign first began four weeks ago.

That health care still tops the list (35%, unchanged) should come as no surprise: health is ultimately what matters most, and unless there is a serious crisis unfolding, it tends to stay top-of-mind for many of us.

The real story of the campaign has been climate change. In mid-September, one in four Canadians (25%) listed climate change among the most important issues capable of determining their vote. It was the third issue of importance overall, behind health care and affordability/cost of living. This in itself was unusual – previous polling has seen climate change fall somewhere in the second half of the top ten. It has never broken the top 3.

Now, three in ten (29%) Canadians include climate change among their three most important issues in determining how they will vote at the upcoming federal election – an increase of 4 points since the start of the campaign, pushing it past affordability to become the second most important issue overall.

Whether it’s the Liberal government’s 2018 purchase of the Trans Mountain pipeline, political sabre-rattling over the implementation of a carbon tax, the Montreal climate march led by teenage activist Greta Thunberg, or the “two planes” saga emanating from the French-language leaders’ debate, Canadians have had ample media coverage of climate issues in recent weeks, and it seems the urgency of the situation is beginning to resonate more strongly with the electorate.

While health care and climate change may be hogging the headlines, pocketbook issues like taxes and the economy are increasingly on Canadians’ minds as they prepare to go to the ballot box. The survey finds that not only has affordability (26%, -1) remained a top issue of importance in terms of determining how Canadians will vote on October 21st, there has been a rise in the perceived importance of issues such as taxes (26%, +4) and the economy (25%, +1). These two issues round out the top five in terms of overall importance to the electorate.

Differences by Generation and Region

Different issues matter more to some groups than others. Health care, for instance, is more likely to be seen as important in determining vote choice for women (38%) than men (31%), and the same trend can be observed for affordability and the cost of living (31% of women vs. 22% of men). By contrast, men (31%) are significantly more likely to cite the economy as an issue of importance, compared to just 19% of women.

Issues like health care and climate change top the list among all age groups, but here too, there are certain issues that resonate more with different generations.

For instance, Canadians aged 55 and over (the most likely cohort to turn out on election day) are significantly more likely than those aged 18-34 to say health care (40%) is important in deciding how they will vote, and are also the most likely generation to be preoccupied by issues around seniors and ageing (28%).

Regionally too, there are clear divides in terms of what issues matter most. While health care is the most important ballot-box issue in Atlantic Canada (45%), the Prairies (42%), and Ontario (35%), climate change leads in Quebec (39%) and British Columbia (38%). Alberta is the only province where the economy (32%) has a clear lead over health care (26%) or climate change (15%) in terms of its important in determining voter choice, though in the Prairies it is cited as a top issue by an even greater proportion of the population (38%).

Beyond the main issues of importance, there are significant

For a full list of all issues of voter importance and their evolution since the start of the campaign, please consult the table at the end of this factum.

Who is Best to Deal with Issues?

When it comes to the dealing with the issues of greatest importance, the Liberals are seen as the best party to deal with issues like health care (32%) , while the Conservatives have the edge in their perceived ability to manage files like taxes (34%) and the economy (40%), and are also slightly ahead on affordability (23%). This is essentially in line with the last time the question was asked, the week the election was first called in mid-September. Since pocketbook issues have shown the most growth in importance to voters over the past week, this is good news for the Tories.

Climate change is the one issue among the top five where neither of the two lead parties has the upper hand: four in ten Canadians (39%) say the Green Party is best to tackle the climate change file, though both they and the Liberals have seen a drop in voter confidence as cynicism about addressing climate change has increased.

Cynicism remains a factor as the campaign continues: many Canadians say that none of the parties is best to deal with the issues that matter – for this group, the parties are all the same. This sentiment is most in evidence in relation to taxes (30%, +8) and climate change (15%, +5). A significant number of Canadians also feel that none of the parties are best to tackle affordability and the cost of living (29%, +2), health care (21%, -2), or the economy (16%). 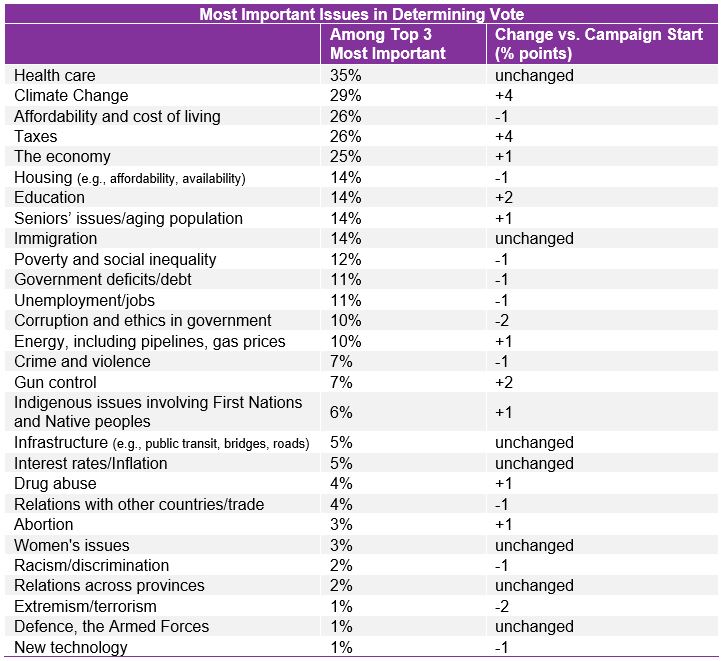 These are some of the findings of an Ipsos poll conducted between October 4 to 7, on behalf of Global News. For this survey, a sample of n = 1502 Canadians aged 18+ was interviewed online via the Ipsos I-Say panel and non-panel sources. Respondents earn a nominal incentive for their participation. Quotas and weighting were employed to balance demographics to ensure that the sample's composition reflects that of the adult population according to Census data and to provide results intended to approximate the sample universe (weighting efficiency = 62.6%). The precision of Ipsos polls which include non-probability sampling is measured using a credibility interval. In this case, the poll is accurate to within ± 2.9 percentage points, 19 times out of 20, had all Canadians been polled. The credibility interval will be wider among subsets of the population. All sample surveys and polls may be subject to other sources of error, including, but not limited to coverage error, and measurement error. Ipsos abides by the disclosure standards established by the CRIC, found here: https://canadianresearchinsightscouncil.ca/standards/